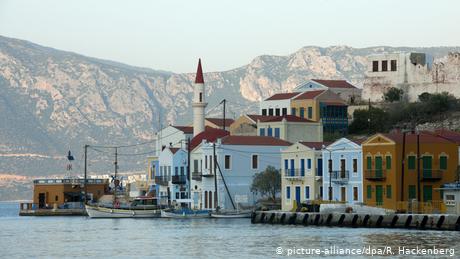 When Tsikos looks east from his restaurant on the Greek island of Kastellorizo, he sees the Turkish city of Kas across the open bay. The nearest Greek city, Rhodes, is four hours away by boat. Naturally, the 150 residents of Kastellorizo generally go to Kas to do their shopping, to take a stroll or to simply have a coffee. This is how Tsikos met his wife. The two married in Turkey, run their restaurant in Kastellorizo during the summer and usually spend the winter in Kas.

"We are friends and like family," Tsikos said. The main issue this year on Kastellorizo is the pandemic. "Before COVID, we had very intense connections with the other side," Tsikos said. "There were boats every day with which we went to Kas and the people of Kas came to us. Generally speaking, we have similar attitudes towards things. There is nothing that separates us as human beings."

The Turkish seismic research vessel Oruc Reis had cruised near Kastellorizo's coast until Sunday. It was accompanied by Turkish warships, which in turn were flanked by Greek naval vessels. A mild collision between two ships in August — a "hot incident," as Greek media reported it — almost led to escalation. At the governments of both Greece and Turkey accuse each other of being responsible for the crash. For all of the jawing between the Athens and Ankara, it is precisely these kinds of incidents that people in Kastellorizo fear. Nobody here wants war.

The formation of modern Turkey and Greece was a process of bloody disputes that precede the Trojan War. Later, most of Greece was under the control of the Ottoman Empire for almost 400 years. The rivalry between the countries and the supposed enmity between the Orthodox Christian Greeks and Muslim Turks has been firmly reinforced through school history lessons. The Lausanne Treaty of 1923 largely determined the borders of modern Turkey, and Kastellorizo was formally made part of Greece in 1948.

With their front-row view of Turkey, many people on Kastellorizo feel that media have hyped the conflict between the governments. Each country has its own way of portraying things in the media, Tsikos said. He said there might be a bit more aggression in the Turkish press, but added that Greek media have hardly focused on de-escalation: "A TV station filmed the passage of a Greek and a Turkish boat and claimed it was another near collision," he said. "In reality, nothing happened at all."

Nobody on the island doubts that there is a conflict between the governments. People in Kastellorizo and Kas have lived with that conflict forever — without turning against each other. Media exaggeration won't change that, they say. "What we see on TV is not true," Nitsa Kontou, a restaurant owner on Kastellorizo, told DW. She said the pandemic had left her with the worst tourism season in years and that the media's spreading of fear had contributed to that. "Our island is safe," she said.

Born and raised in Athens, Alexandros Sarris now teaches international maritime law at the University of Rotterdam. "The law of the sea is one of the least dubious aspects of international law," Sarris said. "It is very well analyzed and very well developed by international jurisprudence. There are very few grey areas — and most of these have to do with what is happening beyond 200 nautical miles of the continental shelves." That means the dispute on the Aegean is no legal novelty: "Whatever happens there, it has already been resolved elsewhere."

Sarris said a bigger concern might be the aggressive rhetoric from Turkish President Recep Tayyip Erdogan. "Erdogan spoke about the border of his heart, which has nothing to do with the border of the actual state," Sarris said. "My assumption is that he means the borders of the Ottoman Empire."

Though Erdogan's heart may desire to expand Turkey's borders, the domestic economy is weak. The lira is at a historic low.

"If I am not mistaken, there is an economic theory saying that economy is not based upon peace, but upon war," Sarris said. "So maybe all these war games could be an attempt to win some economic wars."

For a peaceful solution, Greece and Turkey would need to agree on a legal framework. Greece is a signatory to the 1982 UN Convention on the Law of the Sea (UNCLOS). According to UNCLOS, each individual island would be entitled to its own exclusive economic zone.

This would significantly limit Turkey's access to the sea. The government has not signed the agreement and has argued that it does not apply to the Aegean. "On the one hand, Turkey uses the Law of the Sea for the Black Sea, where they extended their territory 12 nautical miles into the water," Sarris said. "However, Ankara does not feel bound to the same law when it comes to the Aegean. In legal terms this can create a problem."

Now that the Oruc Reis has left the contested zone, the tensions have eased. Sarris, who was a graduate fellow in the negotiations program at the Harvard Law School, sees opportunity here. "Turkey is coastal state, and you cannot deprive it of its rights," he said. "Turkey is not landlocked: It has access to the Aegean, the Black Sea and the Mediterranean Sea. They have rights, but the question is how you exercise these rights when you have adjacent or opposite states and you cannot exhaust the outer limits that are offered by the Law of the Sea convention, because you simply do not have the space, and you have overlapping claims." Many countries are on the coast of the Mediterranean and the Aegean. "You have to make agreements based on the relevant UNCLOS articles and not threaten the neighboring states with the use of force in case they decide to exercise their own rights," he said. Sarris would not be surprised if the governments were to begin talks soon despite the current situation: "Tensions before negotiations are not unprecedented in history."

The residents of Kastellorizo would also like to see the governments quickly settle their dispute. The island needs support after the pandemic summer — not military posturing.