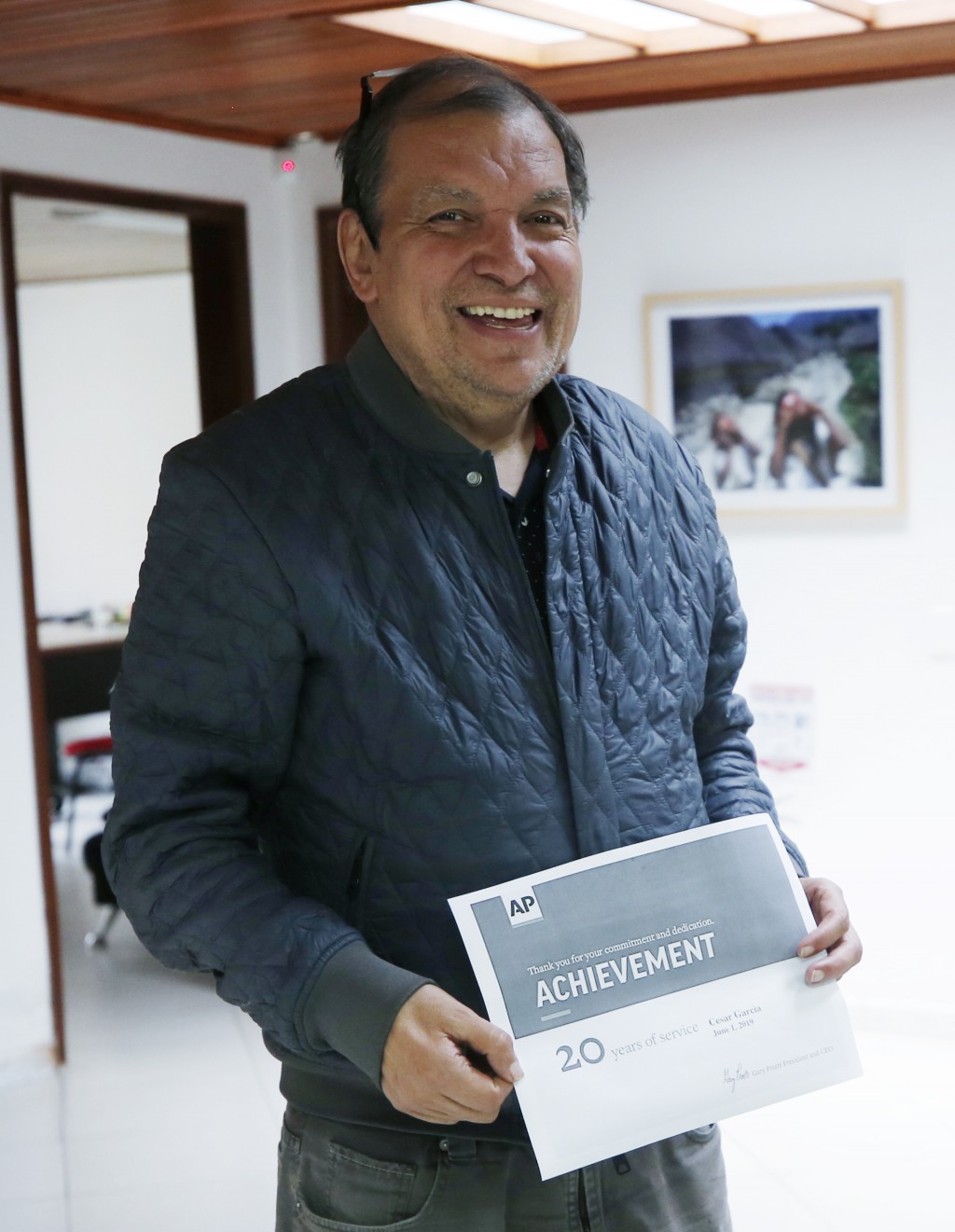 BOGOTA, Colombia (AP) — César García, a veteran reporter for The Associated Press who ventured across Colombia to tell the story of the nation’s armed conflict, has died. He was 61.

He suffered a heart attack and after three weeks at a hospital tested positive for the new coronavirus, though what role the virus may have played in his death on Tuesday remains unclear.

With a voice recorder in hand, García became a fixture at many major events of the last three decades in Colombia, whether peace talks with leftist guerrillas or breaking news from the halls of the presidential palace.

Along the way, his dogged reporting and disarming personality won him the trust of a wide range of dignitaries, an unusual feat in a country where division runs high and wounds from decades of violence are deep.

“Lacking formal training and writing skills, he managed to parlay remarkable grit, persistence and charisma into full-time work with a major news organization,” said Frank Bajak, who worked closely with García as AP's former chief of Andean news. “He did it by making himself indispensable by sheer force of will.”

Bajak added: “And, of course, he was a teddy bear on the inside.”

García was born in Colombia’s capital city and grew up wanting to be a doctor but for economic reasons could not pursue the training. As a young adult, he helped his mother make ends meet in part by selling bonsai trees. Later he got his break in journalism while working as a messenger for United Press International.

While at UPI, he caught the eye of a journalist who, noting his affable demeanor, encouraged him to pursue reporting, said his daughter, Amelia García. He quickly discovered he had a knack for chasing breaking news and getting soundbites from high-ranking officials, many of whom were initially reluctant to talk.

Javier Baena, a former AP correspondent, said he was impressed by García’s steadfast presence and tactful reporting from the Casa de Nariño, the official presidential residence and a hub for political and military leaders. Wanting to hire him for AP, he gave him his phone number and said, “Call when you have important news.”

García took him up on the opportunity, phoning in dispatches that would become headlines around the globe.

“His work as a reporter was essential to the success of our Colombia coverage,” he said. “He was in love with his job as a reporter.”

Officially brought on as a news assistant in 1999, he would rise to become the news cooperative’s principal Spanish language correspondent. Over the next two decades, he fully immersed himself in a job known for ruining any attempt at scheduled plans.

He hopped on a plane when an earthquake struck the city of Armenia, killing 1,000 people. He spent long hours in hospitals waiting to interview survivors of bombings and kidnappings. And he became such a constant figure at rebel peace talks in a rural part of southern Colombia during President Andrés Pastrana’s administration that he became informally known as the mayor of the town of Los Pozos.

Because of García’s many military sources, the rebels were initially hesitant to speak with him, but intent on getting the story, he made a point of reaching out. He ultimately had numerous contacts on both sides of the conflict.

Vivian Sequera, another longtime former colleague, noted that, “He could cross invisible borders. You saw in his face he had no ulterior motives.”

García never turned down an assignment and eagerly deploying to wherever was needed.

“He was an enormously talented, curious, gregarious, well-connected journalist who at the same time was humble, didn’t puff out his chest and was extremely generous with sharing information,” said Andrew Selsky, a former Colombia bureau chief.

A lover of salsa, García routinely sang out the lines of a love ballad to no one in particular in the office. He spoke frequently of his wife of 23 years, Edith Barbara Beltrán, and two daughters, Amelia and Cristina. And he was a soccer aficionado, rooting for Bogota’s Millonarios team.

As he neared retirement, he kept up a brisk pace, dodging tear gas in the streets of Bogota last year during anti-government protests and covering the recent Supreme Court house arrest order of powerful ex-President Álvaro Uribe.

“He was one of the most well-sourced journalists I have ever met,” said Eduardo Castillo, AP’s Spanish service news director, recalling a recent incident in which he asked García for military reaction to a story, and García came back within 30 minutes with comments from the defense minister. “He never said no to anything.”

Joshua Goodman, an AP reporter and former Andes news director, added: “His attitude toward journalism and life is summed up in a phrase he used to always repeat: ‘We’re in action.’”

On one of his final assignments, he collaborated with AP writer Christopher Torchia for a story on the tensions that remain over the country’s historic 2016 peace deal ending the conflict with the Revolutionary Armed Forces of Colombia.

Having worked together in the 1990s, García began to reminisce about his early days with AP, telling him, “To remember is to live.”

In addition to his wife and children, García is survived by his mother and four siblings.