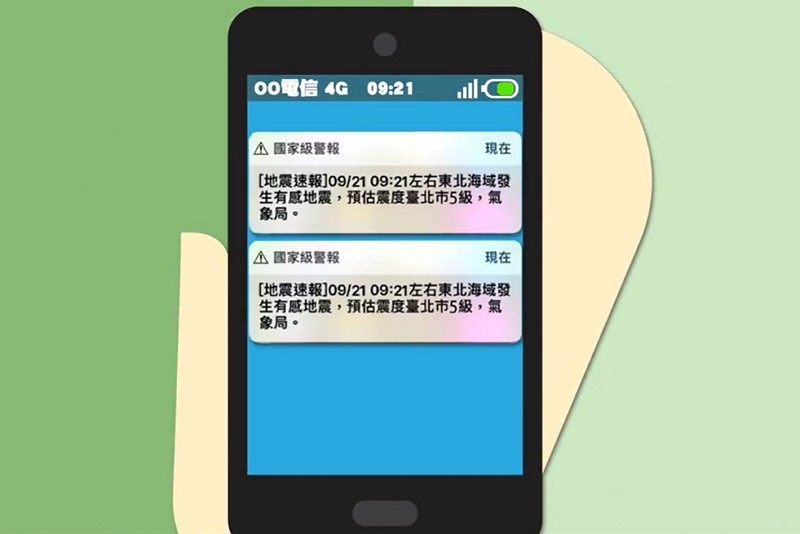 TAIPEI (Taiwan News) — Cellphone users in Taiwan are asked not to panic on Sept. 21, when they receive an emergency SMS to mark the 21st anniversary of the 1999 Earthquake, the second-deadliest quake in the history of the country.

There will be government-held events to raise public awareness on the importance of disaster preparedness Sept. 21, designated as National Disease Prevention Day. This year a text message will be sent to mobile phone users nationwide about a simulated earthquake hitting southern Taiwan at 9:21 a.m., Sept. 21, according to the National Fire Agency (NFA).

In the simulation, a magnitude 6.9 earthquake will hit Tainan, causing buildings to collapse, bridges and roads to buckle, fatalities, loss of power and water, and disrupted telecommunications services, according to Newtalk.

Residents are invited to take response measures such as taking cover upon receiving the alert from the Central Weather Bureau (CWB) in the quake exercise. A siren will be sounded at 10 a.m. for a tsunami warning, and cable TV channels will switch to a public channel at 10:59 a.m. for a disaster-related information broadcast.

Sept. 21 will kick off a series of events in the week that plans to educate people on disaster management. Those who take part in the quake drills will have a chance to take home prizes in a raffle held by the NFA.