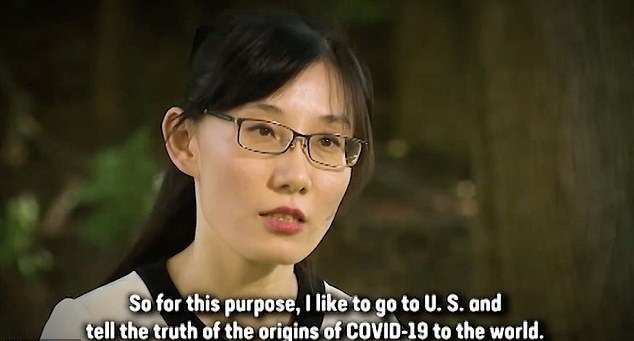 TAIPEI (Taiwan News) — A Chinese virologist and whistleblower on Monday (Sept. 14) followed through on her pledge to release a paper explaining how the genome of the Wuhan coronavirus (COVID-19) indicates that it was constructed in a Chinese lab rather than naturally occurring.

For the past few months, Yan Li-Meng (閻麗夢), a virologist employed as a researcher at the University of Hong Kong's School of Public Health when the coronavirus pandemic began, has been alleging that the coronavirus came from a Chinese lab and that it is a chimera based on the "Zhoushan bat coronavirus." According to Yan, an examination of the genome sequences released by the Chinese government on Jan. 14 also shows that the Zhoushan ZC45 and ZXC21 strains are the closest to SARS-CoV-2 and that they are the "backbone" upon which COVID-19 was constructed.

In August, Yan claimed that she and her team had produced a scientific report that shows the origin of COVID-19 is the "PLA-owned Zhoushan bat coronavirus." She stated that she planned to release the report in the near future, and accused the World Health Organization (WHO) of "covering up numerous lies for the CCP."

On Monday, Yan released the report on the data platform Zenodo with the title "Unusual Features of the SARS-CoV-2 Genome Suggesting Sophisticated Laboratory Modification Rather Than Natural Evolution and Delineation of Its Probable Synthetic Route." Zenodo is a general open access repository developed under the European OpenAIRE project and operated by the European Organization for Nuclear Research (CERN), allowing researchers to store data, software, reports, and any research-related tools.

In the abstract, Yan's team pointed out that despite the fact that COVID-19 (SARS-CoV-2) has claimed the lives of over 900,000 people and devastated the global economy, the origin of the virus remains a mystery and highly controversial. The theory that the virus originated in nature is widely accepted, despite the lack of solid evidence, while suggestions that the disease may have come from a laboratory have been strictly censored from scientific journals, according to the report.

The paper pointed out that the biological characteristics of SARS-CoV-2 are not consistent with a naturally occurring zoonotic virus. The researchers assert that the genomic, structural, medical, and literaty evidence presented in the paper strongly contradicts the natural origin theory.

As previously mentioned by Yan, the researchers claim that evidence provided in the report point to the ZC45 and ZXC21 bat coronaviruses as the model or base for the chimera that became SARS-CoV-2.

Furthermore, the authors postulate that the steps needed to produce the virus synthetically in a laboratory can be achieved in "approximately six months." The scientists then call for an independent investigation into China's virology laboratories, particularly gain-of-function research carried out at the Wuhan Institue of Virology (WIV).

In Part 1 of the paper, the scientists provide evidence that the SARS-CoV-2 was subjected to in vitro manipulation. First, it states that the genomic sequence of the virus is strikingly similar to that of a bat coronavirus found by People's Liberation Army (PLA) labs in the Third Military Medical University in Chongqing, China, and the Research Institute for Medicine of Nanjing Command in Nanjing, China.

Second, it shows that the receptor-binding motif (RBM) found in the virus's notorious spike protein is "suspiciously" similar to SARS-CoV from the 2003 SARS outbreak, indicating it was genetically modified. Third, the spike protein of the virus contains a unique furin cleavage site that is "completely absent in this particular class of coronaviruses found in nature," while the rare codons seen in this sequence suggest that it could have been inserted into the genome artificially

The study excludes the RaTG13 virus submitted by WIV scientist Shi Zhengli, also known as "Bat Woman," because recent research has shown that its spike protein cannot bind to the angiotensin-converting enzyme 2 (ACE2) of two types of horseshoe bats, the alleged natural host, indicating that it may be "fabricated to shift the attention away from ZC45/ZXC2.

In Part 2 of the paper, the researches describe how SARS-CoV-2 could be designed and "created conveniently" in laboratories using the ZC45/ZXC2 viruses as the backbone. The scientists postulate that Step 1 consisted of replacing the RBM with a "designed and possibly optimized RBM" using that of SARS-CoV as a guide to enable it to bind with the human angiotensin-converting enzyme 2 (hACE2).

The authors pointed out that Shi, along with long-term partner and structural biology specialist Fang Li, had successfully modified the RBM in this way. The report estimates that this first phase would take about one and a half months.

Step 2 would consist of engineering a furin cleavage site at the S1/S2 junction of the spike protein. According to the researchers, this short stretch of gene sequence can be "conveniently inserted" using a number of standard cloning techniques, such as "QuikChange Site-Directed PCR60, overlap PCR followed by restriction enzyme digestion and ligation91, or Gibson assembly."

The authors stated that none of these methods would leave any trace in the sequence. This further modification of the spike, including the furin-cleavage site, could be completed in "no more than two weeks," according to the report.

Step 3 could be carried out simultaneously with the previous steps and would consist of acquiring an ORF1b gene that holds the RdRpgene segment from RaBtCoV/4991, a bat coronavirus discovered in 2013. The authors believe that that the Chinese virologists wanted the RdRp protein either to ensure that the resulting chimera would be classified in different groups/sub-lineages than ZC45/ZXC2 in phylogenetic studies or to test antiviral drugs.

Step 4 would involve using reverse genetics to produce the chimera and recover live viruses within the course of two weeks. The authors cited an example of how a Swiss team was able to reconstruct the entire SARS-CoV-2 genome using transformation-assisted recombination in yeast within a single week.

Significantly, this method has been available since 2017 and "would not leave any trace of artificial manipulation in the created viral genome." The paper also mentioned that the WIV has used alternative methods of reverse genetics in the past.

Step 5, and the final step in the process, is to optimize the virus for its hACE2 binding affinity (ability to infect humans) with experiments on live animals. This normally consists of infecting rodents, such as hACE2 transgenic mice (hACE2-mice), with the virus and extracting the highest viral load from 10 to 15 rounds of passage to obtain the strain with the optimal hACE2-binding affinity.

However, the authors of this report postulate that the Chinese scientists failed to use a "proper animal model" when testing the transmissibility of the virus. If they had, the scientists say the highly contentious nature of SARS-CoV-2 would have been obvious and the early claims of "not causing human-to-human transmission" would have not been made at the start of the pandemic.