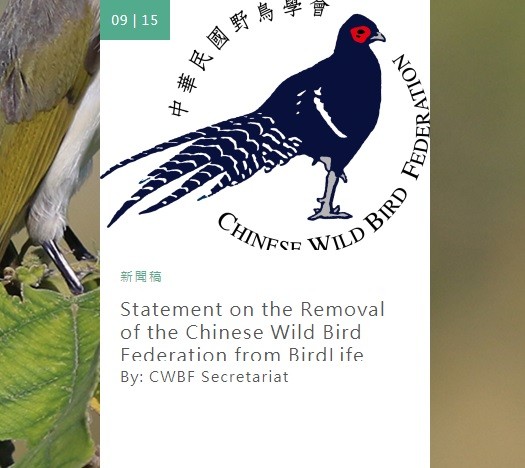 TAIPEI (Taiwan News) — BirdLife International (BirdLife), a global bird conservation organization, has been accused of removing its Taiwanese partner after it refused to give in to Chinese political pressure intended to undermine Taiwan’s sovereign integrity.

“Our removal potentially casts a shadow on the good conservation work done by so many [people], especially here in Asia," said the Taiwan-based Chinese Wild Bird Federation (CWBF) via a statement on Tuesday (Sept. 15). “It also seems to be an example of politics getting in the way of good conservation.”

CWBF said it was forced to end its partnership with BirdLife on Sept. 7 because it had not complied with a certain political agenda laid out by the global NGO since last December. BirdLife has demanded its Taiwanese partner alter its legally registered name in Mandarin, which is “中華民國野鳥學會,” because the name “has posed a risk” to the operations of the international organization, said CWBF.

In addition, CWBF said the Global Council, the governing body of BirdLife, has also asked the association to sign a document “formally committing to not promot[ing] or advocate[ing] the legitimacy of the Republic of China or the independence of Taiwan from China.” Speaking of its refusal to agree with those demands, CWBF stressed that it is “an apolitical organization” that has never taken a stance on political issues as such.

“We felt it was inappropriate to sign such document and were unable to comply” with those demands, said CWBF, adding that, “We are not political actors, we are conservationists.” Established in 1988, CWBF is an association that includes 21 local bird conservation groups across Taiwan.

CWBF has been a partner of BirdLife since 1996. However, over the past few years, CWBF has changed its English name three times at the request of BirdLife.

According to CWBF, BirdLife has also made clear that it would no longer allow its name or logo to be used in events, documents, reports, or any other forms of communication which are sponsored, organized, or have anything to do with Taiwanese authorities. BirdLife claimed it would be “odd” for it to deliberately distance itself from Taiwan’s "independence agenda" while also benefiting financially from the Taiwanese government, said CWBF.

"Such a statement is clearly a political determination and one which should not be made by a global conservation organization such as BirdLife International," stated CWBF. As of press time, access to the Taiwan section on BirdLife's website is no longer available.

The ministry “severely condemns the Chinese government for interfering with and pressuring ecological and conservation activities that are totally apolitical,” said Taiwan’s Ministry of Foreign Affairs (MOFA) on Tuesday evening via a statement. Criticizing the global NGO for colluding with Chinese authorities to bully the Taiwanese bird society, MOFA Spokesperson Joanne Ou (歐江安) said Taiwan’s representative office in the U.K. would lodge a protest against BirdLife, which is headquartered in Cambridge.

“The political consideration held by BirdLife will ultimately allow global conservation efforts to be fettered by politics,” Ou said. The ministry remains committed to helping civil groups in Taiwan take part in global affairs and will provide necessary assistance to CWBF, the spokesperson said.