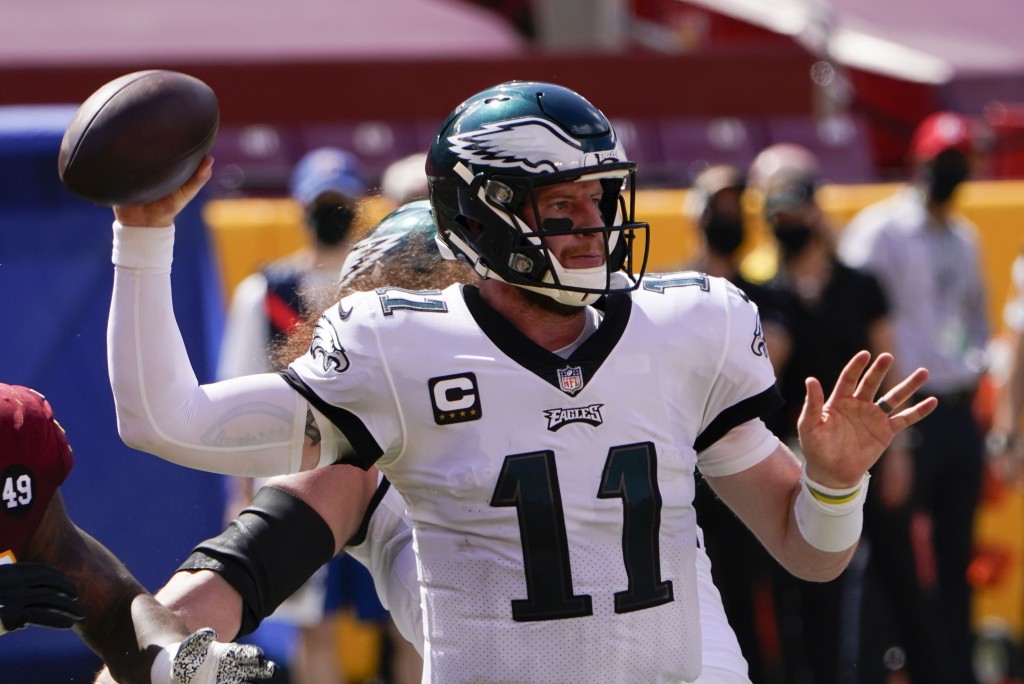 PHILADELPHIA (AP) — Doug Pederson hoisted a Vince Lombardi Trophy because of his aggressive coaching so he’s not stopping now.

A day after the Philadelphia Eagles blew a 17-0 lead in a stunning 27-17 loss to the Washington Football Team, Pederson vowed to stick with a philosophy that led the Eagles to the franchise’s first Super Bowl title three years ago and consecutive playoff appearances.

Up by 17 with 1:44 left in the second quarter, the Eagles had a first down at their 28. Instead of running the ball and working the clock, they continued firing. Wentz’s pass for Jalen Reagor was underthrown and picked by Fabian Moreau at the Philadelphia 45. Dwayne Haskins then connected on four straight passes after starting 3 of 12. He hit Logan Thomas for a 6-yard TD toss to cut the deficit to 17-7. That gave Washington momentum going into halftime.

Up 17-14 late in the third quarter, Pederson went for a fourth-and-4 from the Washington 45. Carson Wentz got sacked. Washington got the tying field goal on the ensuing possession.

Pederson went for a fourth-and-3 from the Eagles 42 down 24-17 with 4:35 left in the game. Zach Ertz dropped a pass that would’ve been a first down.

“I guess you’re asking me if I could have run the ball when we were up 17-0 the rest of the game,” Pederson said, responding to a question. “Yeah, that’s being less aggressive, but listen, I’m going to do what I feel is the best interest of the football team and we cannot turn the ball over. We cannot have eight sacks. We cannot put our defense on the short side of the field as an offense. We have to execute better on fourth down. We have a guy open; we don’t execute the protection. We drop a pass on another fourth down in the game.

“So there’s all kinds of things that we can point the finger at. I can do a better job with a couple of play calls throughout the game, and those are all things that we take away from this first game and we are probably sitting here asking different questions.”

Rookie first-round pick Jalen Reagor showed off his speed, blowing past the defense for a 55-yard catch on third-and-22. Reagor also flew past defenders for what would’ve been a 75-yard touchdown catch but Wentz overthrew him.

Defensive end Josh Sweat had a career-high 49 snaps and recorded one sack. Sweat will push 2017 first-round pick Derek Barnett, who was out with an injury, for playing time. Injuries along the line should give Sweat more opportunity.

Defensive end Brandon Graham is in concussion protocol. Curry and cornerback Craig James both suffered “significant” injuries and are out for multiple weeks. Curry has a hamstring issue but James’ injury wasn’t disclosed.

14 — Points off turnovers for Washington. One drive went for 45 yards and the other for 20. Meanwhile, the Eagles couldn’t get any turnovers.

The Eagles must figure out how to block Aaron Donald or Wentz will be in trouble when the Los Angeles Rams (1-0) visit Philadelphia on Sunday. The Rams opened with a 20-17 win at home against Dallas.