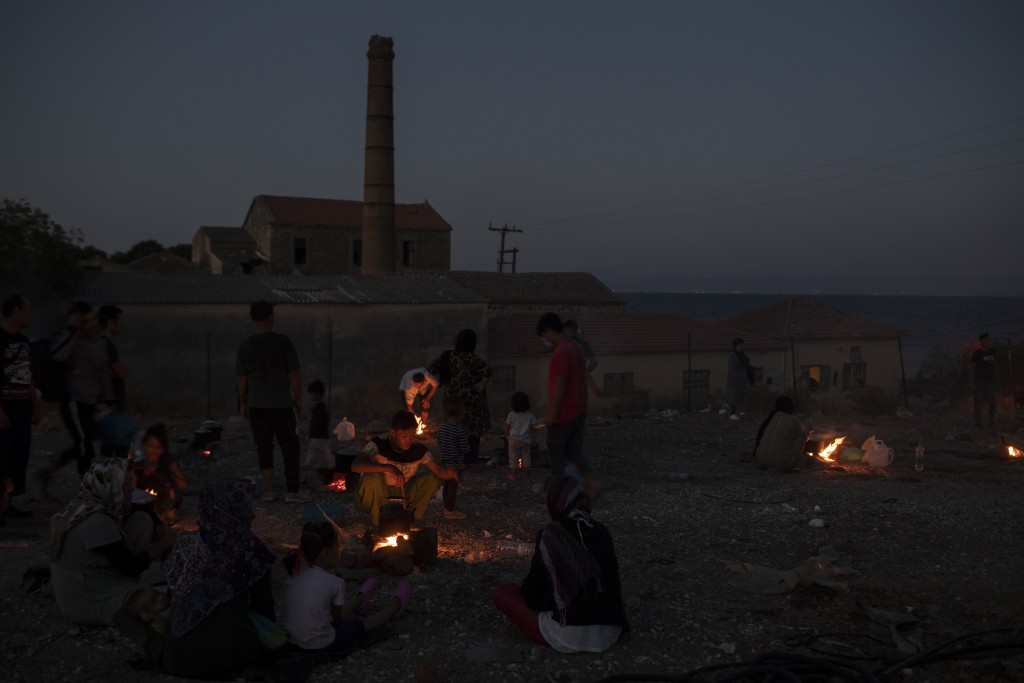 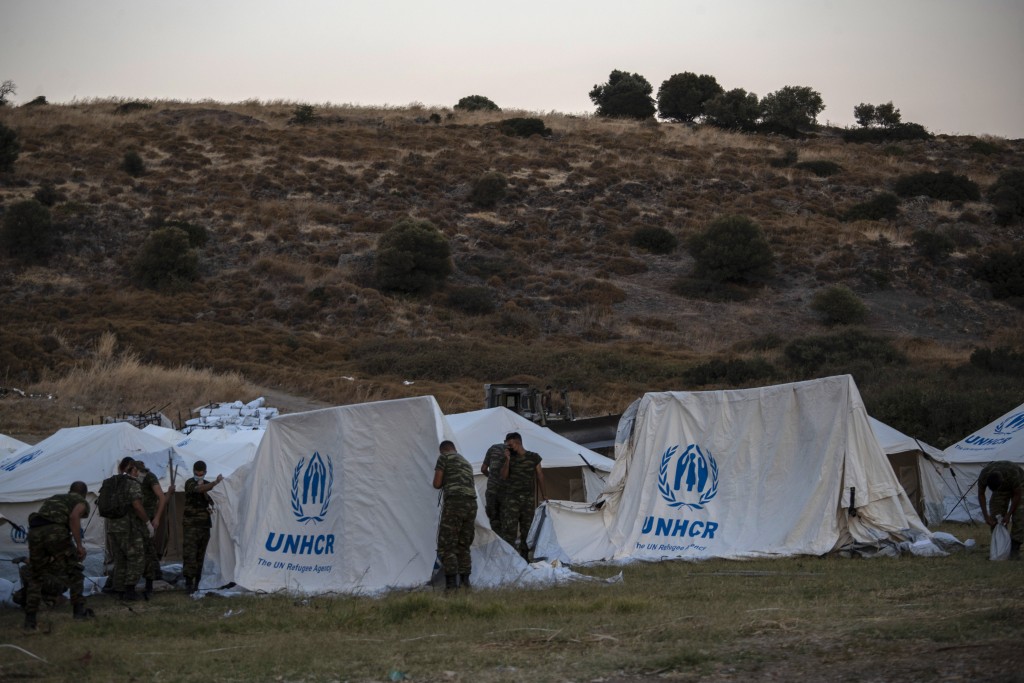 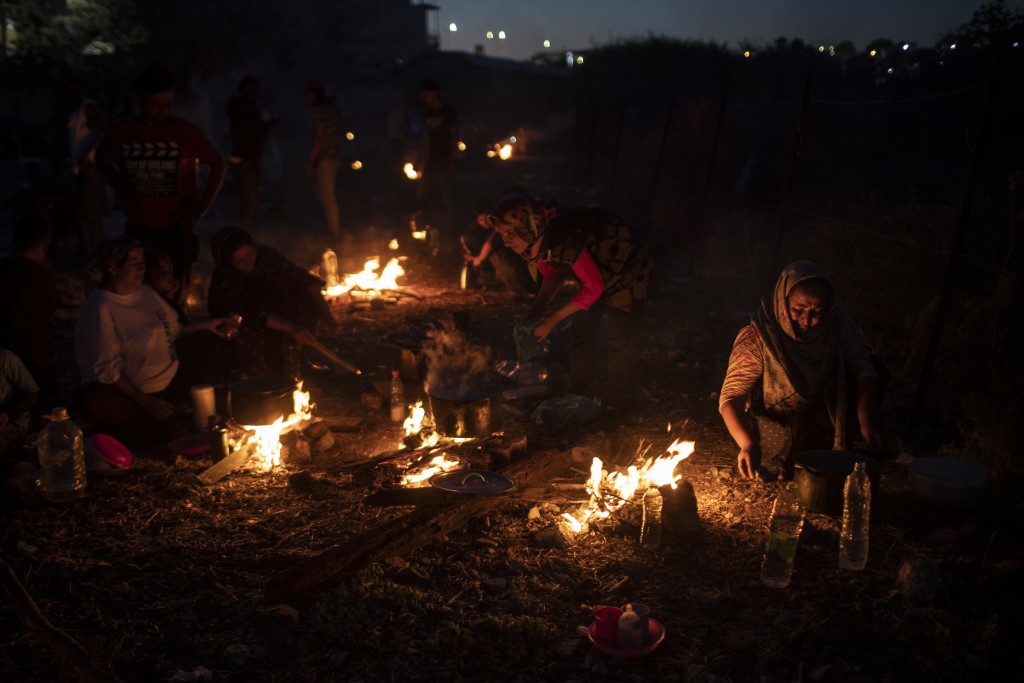 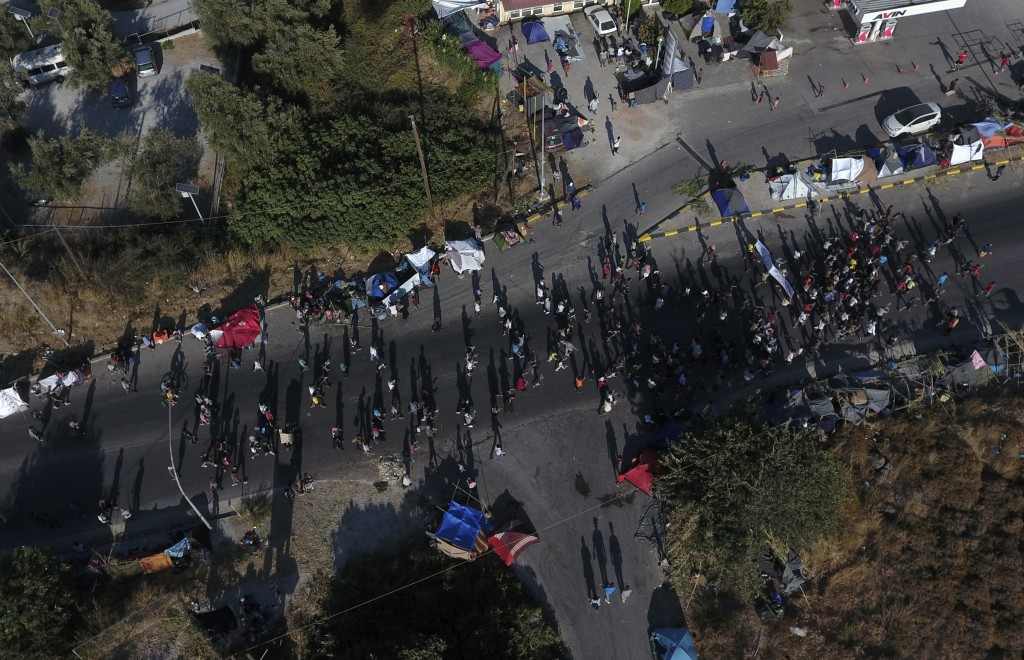 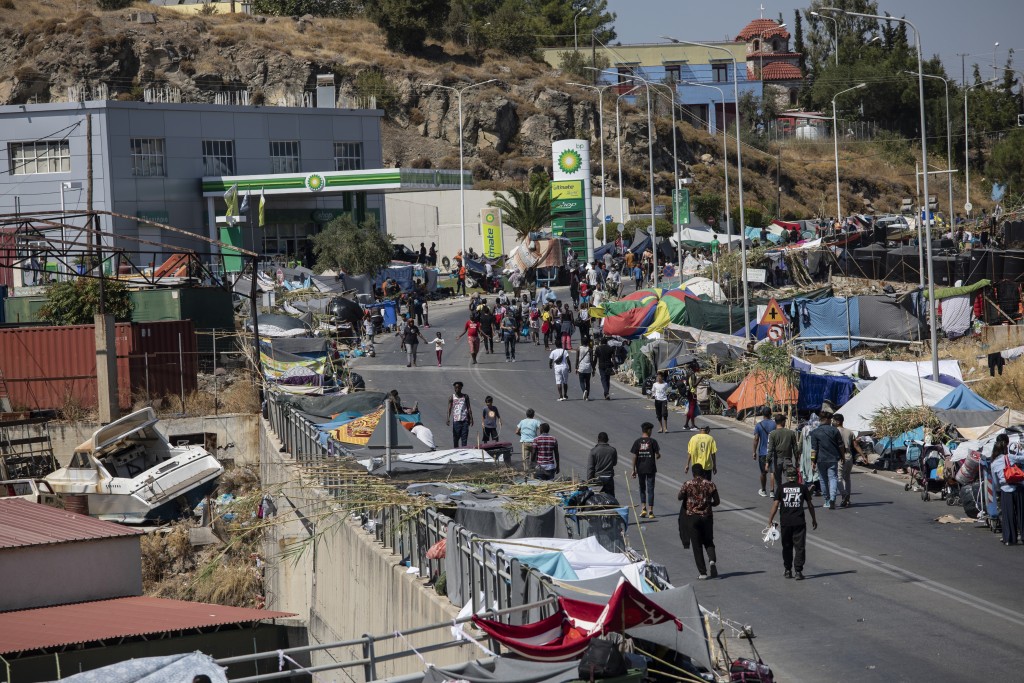 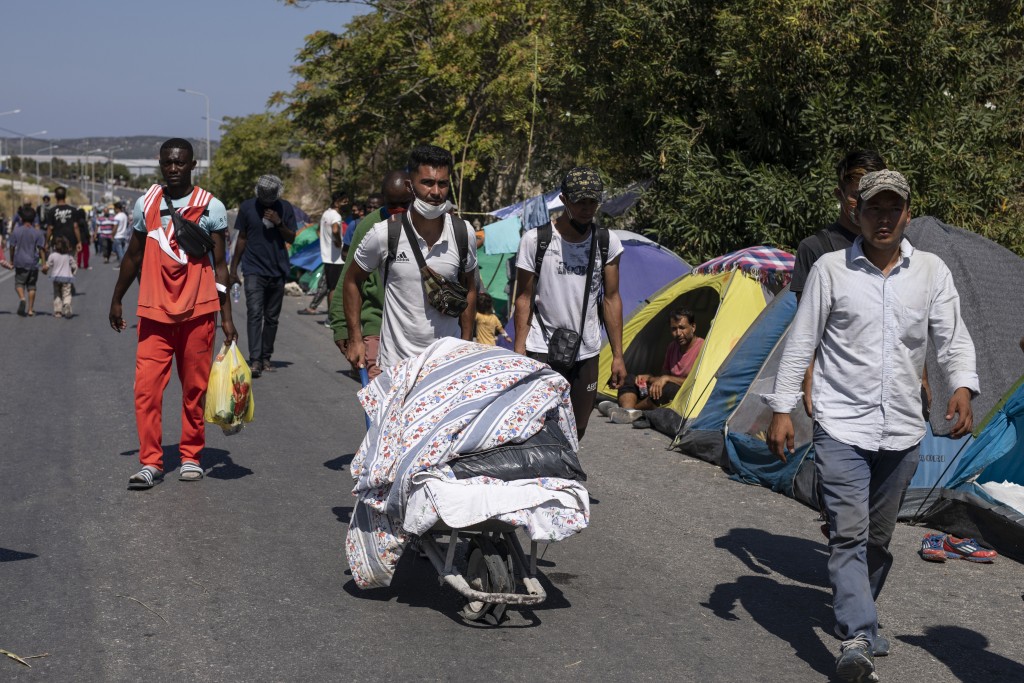 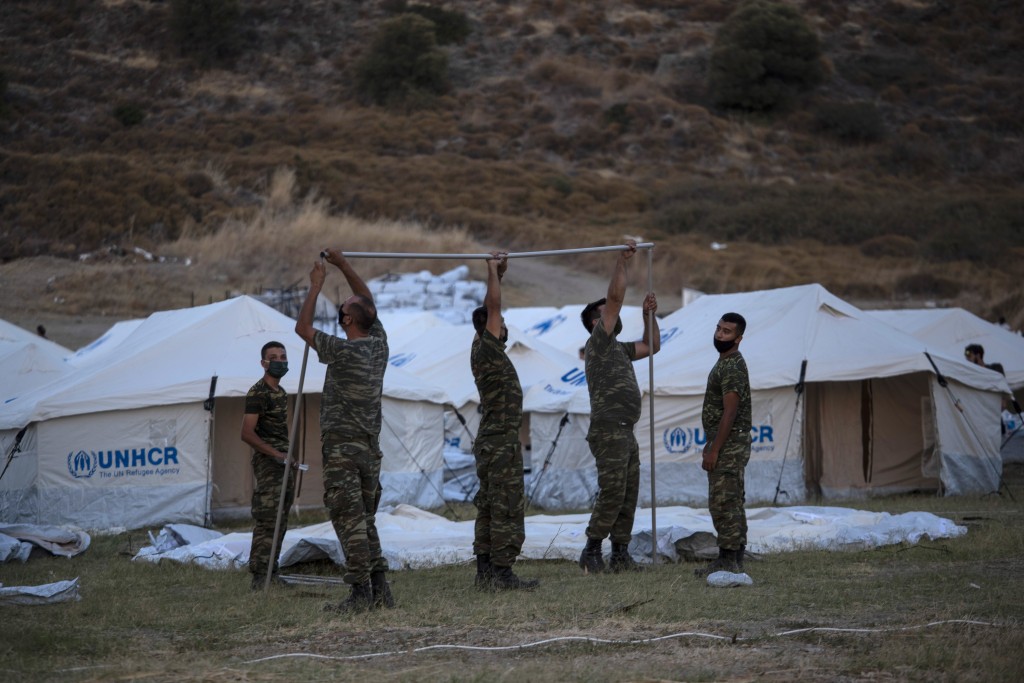 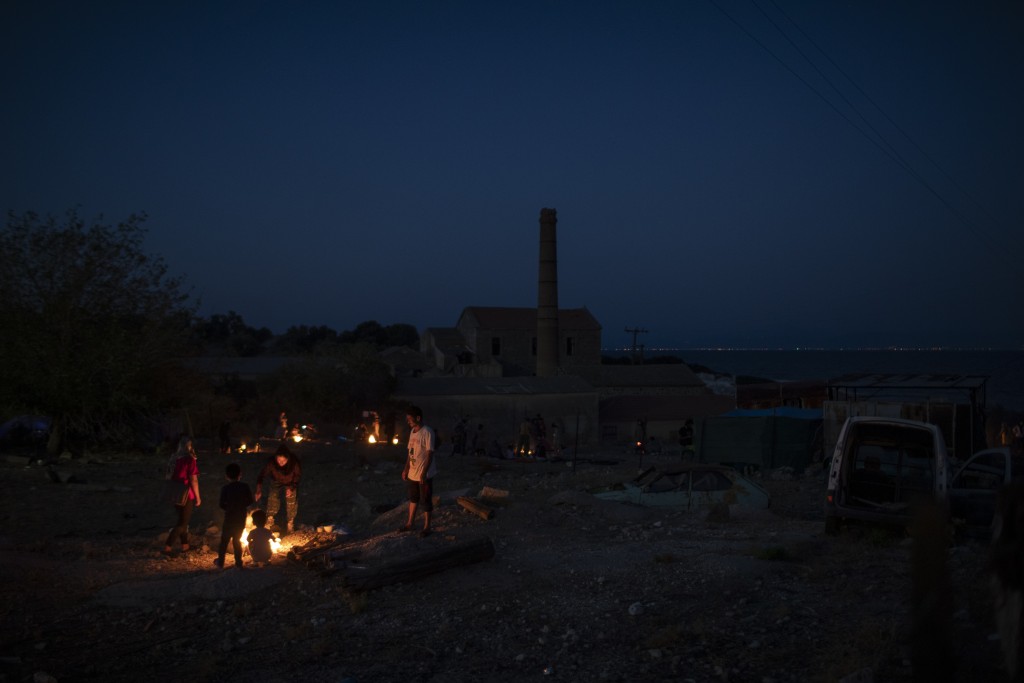 MORIA, Lesbos (AP) — Thousands of asylum-seekers have spent a fourth night sleeping in the open on the Greek island of Lesbos, after successive fires destroyed a notoriously overcrowded migrant and refugee camp during a coronavirus lockdown.

Officials have said the Tuesday and Wednesday night blazes were deliberately set by some camp residents angered at quarantine and isolation orders imposed after 35 people in the Moria camp tested positive for COVID-19.

With the camp gutted, Saturday morning found men, women and children sleeping under improvised shelters made of reed stalks, blankets and salvaged tents. Thousands gathered for a protest to demand to be allowed to leave the island.

Mostly children and women stood at the front of crowed as the protest got underway peacefully as riot police observed. Participants held up banners with slogans written on pieces of cardboard or sheets.

“We need peace & freedom. Moria kills all lives,” read one.

Leaving the island would require a bending of European Union rules, under which asylum-seekers reaching Greece’s islands from Turkey must stay there until they are either granted refugee status or deported back to Turkey.

The Moria camp was built to house around 2,750 people but was so overcrowded that this week’s fires left more than 12,000 in need of emergency shelter on Lesbos. The camp had long been held up by critics as a symbol of Europe’s failings in migration policy.

Moria was put under a virus lockdown until mid-September after the first case confirmed there was identified in a Somali man who had been granted asylum and left for Athens but later returned to the camp.

On Friday, 200,000 rapid-detection kits for the virus were flown to the island for an extensive testing drive that would include asylum-seekers and islanders.

Authorities have said none of the camp’s residents — except for 406 unaccompanied teenagers and children — would be allowed to leave the island. The unaccompanied minors were flown to the Greek mainland on Wednesday, and several European countries have said they will take some of them in.

Soldiers have been setting up new tents to house about 3,000 people on a new nearby site, flown in by helicopter to avoid protests by local residents angered at the use of their island as a holding center for thousands of people from the Middle East, Africa and Asia arriving from nearby Turkey.

Moria's overcrowded squalor created tension both among the camp’s inhabitants and with locals, whose initially generally welcoming attitude during the height of Europe's refugee crisis in 2015 has waned over the years.

Many of the asylum-seekers in Moria described life there as being worse than much of what they had endured on their long, often painful journeys toward what they hoped was a better life in Europe.

“While in Africa, we walked from 7 p.m. till 5 a.m. in the morning to avoid the heat and the police. That was hard. But being here, stuck, I think is worse,” Amados Iam, a 23-year-old from Mauritania, said. “I didn’t come all the way to stay here. (I) Want to leave Greece.”

Iam arrived in Moria three months ago with his 19-year-old brother. Both have suffered severe stomach issues, and a doctor in the local hospital in Lesbos told them it was due to the poor living conditions, including bad quality water and food, in Moria, Iam said.

The brothers left Mauritania in 2017, crossing north Africa on foot and then making their way by truck to Turkey. Drought had ruined their mother’s farm, so Iam couldn’t continue studying, and the brothers feared conscription or being killed by the various armed groups coming from Mali and roaming in the south and west of Mauritania, they said.

All their paperwork had been completed but the brothers had heard nothing about the status of their asylum request, they said. Their intended destination was France or Belgium.