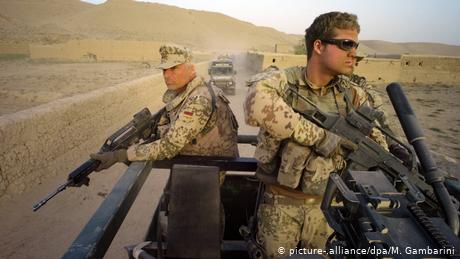 Was it worth it? It is a tough question many in Germany are asking, including the families of the 59 German soldiers who lost their lives in Afghanistan. Soldiers of the Bundeswehr — Germany's armed forces — were expressly told that their mission was not a combat one, but rather a short intervention only, aimed at stabilizing a war-torn country in which al-Qaida founder and September 11 attacks mastermind Osama bin Laden was hiding.

But everything turned out very differently: Germany is still taking part in a NATO-led mission to train and assist the Afghan National Defense forces, with up to 1,300 soldiers deployed to Afghanistan currently. At its peak, the mission included some 5,000 German troops at a time.

The fundamentalist Taliban regime that had sheltered al-Qaida in Afghanistan was overthrown in 2001, and bin Laden was killed a decade later — in neighboring Pakistan. An Islamic republic has been formed, and Afghanistan today has an elected president and an elected parliament. Women are allowed to work and girls go to school. The rubble desert of Kabul has turned into a modern city, where the internet and smartphones are part of everyday life for many people.

But the conflict in Afghanistan is still one of the bloodiest in the world. More than half of the population lives in dire poverty. The country cannot finance itself without international help, corruption and greed for power are eating away at the state. Was it worth it? DW asked two veterans and a military historian for their takes.


German commander: Kabul was 'like Berlin after World War II'

Carl-Hubertus von Butler was the first German commander in Afghanistan from January to June 2002, after which he completed many short deployments in the country. The retired army lieutenant general comes from a family of soldiers and now lives on an estate in Bavaria.

"It was like [after] an earthquake," says von Butler of his first impression of Kabul in January 2002. At that time, Afghanistan had already been through 20 years of war: Soviet occupation, civil war, the Taliban regime. The pictures from back then still haunt him today. "You hardly saw any people on the street. Everything was destroyed. You have to imagine it like Berlin after World War II."

Until September 11, 2001, von Butler knew "next to nothing" about the distant land in Central Asia. That changed abruptly when NATO announced that it would become involved in the war against terrorism after the attacks in the US. On October 7, 2001, US forces carried out the first air raids.

Read more: Why is the US in a rush to pull out troops from Afghanistan?

'We were very naive back then'

On December 5, an international conference of leaders meeting in Bonn, Germany decided to build a democratic state in Afghanistan, and the UN Security Council issued the mandate for an International Security Assistance Force (ISAF) in Kabul. The move amounted to marching orders for von Butler, who led the first brigade: "Everybody thought it would be a quick job. A maximum of one or two years. Then Afghanistan would be stabilized and possibly even democratized — and we get out and all is well."

Clearly, the mission did not play out like that. "I think we were really very naive back then," von Butler admits, without mincing words. Afghan history and the years of violence, he says, were completely misunderstood. "We failed to realize that an Afghan central government would not be able to intervene in the provinces at all. We failed to recognize that the warlords had enormous authority in the provinces." By warlords he also means the mujahedeen leaders, who with US help had already fought against the Soviet occupation.

Now the American military has made them partners again — a heavy burden on democracy that was to come about with international aid. "The mandate was simply set too high," emphasizes von Butler.

In October 2003, the ISAF operational area was expanded to include the entire country. German soldiers died in suicide attacks and in combat. Afghan civilians died after a German colonel ordered an airstrike on the Taliban in Kunduz in 2009.

"I personally spoke of war from around 2007 onward," said von Butler, who has been retired since 2012. Back then everybody on the ground had to realize that "we are no longer on a mission where we can say, 'wave and smile' [at the population]. Rather, it is really getting serious here. It is war. We must fight to the death."

The lesson learned? "Soldiers can never provide permanent stability," emphasizes von Butler. In his opinion, only a politically and economically stable state can do that. But there was no such thing — and "the United Nations were also hopelessly overwhelmed" in its efforts in the country.

He sees Afghanistan "on a knife's edge." The NATO-led protection force has now become a training mission for the Afghan army. The US — which leads the mission — has long stopped talking about nation-building. As has von Butler.


Ex-soldier: Early on, 'it was really very innocent'

As a soldier, Dunja Neukam carried out four tours to Afghanistan. Trained as a nurse, she then served a total of 12 years with the troops before leaving the Bundeswehr.

Dunja Neukam remembers her initial arrival in the capital, Kabul, very well: The Bundeswehr plane descended steeply towards the runway in order to offer as little attack surface as possible, a tactical landing that made her feel sick. That was in June 2002. "Outside we were hit with 50-degree heat and there was nothing colorful, it was all sand and gray." For the first time she saw women in burqas. "That was a completely different world."

But the reception was friendly: "The Afghans always waved and were happy, including the children." The German soldiers were part of the ISAF, the multinational force that was supposed to secure Kabul after the fall of the Taliban. Then 30 years old and a medical sergeant, Neukam worked in the intensive care unit in "Camp Warehouse," an ISAF military base. In addition to soldiers from different countries, she also treated Afghans, including the country's deposed last monarch, King Zahir Shah, who had returned from exile.

She also got around in the war-torn city. "We always pointed to the German flag on our uniform jackets, and then [Afghan people's] thumbs went up: 'good, good!' That was a nice feeling at the time." The soldiers drove through the city in unarmored vehicles, giving away sweets to the children. "When I was out for the first time, it was really very innocent."

Suicide attack on the Bundeswehr

That changed suddenly in June 2003: A suicide bomber blew up a bus carrying German soldiers in Kabul. Four of them died and many more were injured. Neukam had only recently left Afghanistan and knew the troops well. "I saw them in Kabul, still healthy and happy. Then that changed everything."

After the attack, the Bundeswehr tightened the security rules, and distrust of the Afghans grew. "You drove in armored vehicles, heavily armed in the convoy, you didn't let anyone near the vehicle." That, says Neukam in retrospect, was just a year after the warm welcome. "I was then also very cautious about the Afghans. This being naive and always friendly, I didn't have that anymore," she recalls. "Behind every Afghan you saw an enemy — that's just how it was."

'What am I actually doing here?'

Nevertheless, she continued to believe in the success of the mission: "I was firmly convinced that economic help, good works and education could help the country get back on its feet." But this trust also crumbled when the Bundeswehr repeatedly got into heavy fighting with the Taliban in the north of the country. The year 2010, half of which Neukam spent in Kunduz, was rife with losses. She served her comrades as a medical sergeant specializing in mental health support. She heard them express doubts about the operation: "'What am I actually doing here?' That was another question that I was asked. 'Tell me what I am actually doing here!'"

She has also taken stock of her four missions and is grateful for the experiences, both good and bad. "Ultimately, when I see where Afghanistan is now, it wasn't worth it," says the trained nurse, who now works with severely handicapped people. Too many comrades lost their lives for this, and were wounded in body or spirit, she says. And what was it all for? "With blood and sweat we fought for places that are now back in the hands of the Taliban. I think that's really bad."

Sönke Neitzel is Professor of Military History at the University of Potsdam — the only such position in Germany. In his upcoming book "Deutsche Krieger" ("German Warriors"), Neitzel also sheds light on the deployment of the Bundeswehr in Afghanistan.

"The Germans never had a strategic vision for Afghanistan," says the military historian. "It was always about NATO and Germany's weight in foreign policy." In order to show alliance solidarity after the 9/11 attacks, then-Chancellor Gerhard Schröder sent the troops to Afghanistan — with the intention of withdrawing them six months later. "At best, the Afghans were of secondary importance."

But nothing came of the planned short deployment. The Taliban and other insurgents later attacked the German contingent in northern Afghanistan directly — a phase that escalated in April 2009. For the first time since its founding after World War II, the Bundeswehr had to carry out combat operations.

The commanders and combat troops in Kunduz were ready for this, emphasizes the military historian, who has evaluated soldiers' diaries and operational reports — but Germany's government was not. "Chancellor [Angela] Merkel did not want that, the defense minister did not want that and neither did the Bundeswehr inspector general." When the soldiers demanded heavy weapons and more forces, they fell on deaf ears in Berlin. "We keep out of it, that's the Afghans' business," they said.

This created a dilemma for the soldiers, because they could not stay out of the increasing hostilities — on the one hand because of the attacks by the Taliban, on the other hand because of the pressure from ISAF headquarters to crack down on the insurgents. The German soldiers, Neitzel concludes, were "sitting between two chairs."

A full troop withdrawal was out of the question for the Merkel government: "For political reasons, they wanted to continue being the third-largest provider of troops in Afghanistan. Doing so meant Germany had weight in the EU, the United Nations and above all in NATO."

The allies reacted with confusion to this contradictory behavior of the Germans and sometimes found the Bundeswehr soldiers to be cowards. "Anyone who tried to make an objective judgment knew that the German soldiers can and want to fight, but they are not allowed to," says Neitzel. The reasons, he says, stem from Germany's history: "The events of the Third Reich and the Second World War still have a massive impact on German political culture. But that is also used as an excuse."

The result: Citing foreign policy reasons, Germany is always "a little involved" in multinational operations, but does not really want to fight, says the military expert. "Of course that annoys everyone in NATO enormously."

This "strategic failure of the federal government," as Neitzel calls it, has weakened soldiers' loyalty to the state. He is therefore not surprised that the far-right populist Alternative for Germany (AfD) "is so popular among soldiers." Many who were previously loyal voters of Merkel's ruling conservative Christian Democrats would probably vote for the far-right today.

Some 19 years on, the continuing Afghanistan mission raises the question of why Germany spends €45 billion ($53.4 billion) per year to retain its fighting forces, including combat troops, special forces and expensive weapons systems. But the German government consistently evades this question, Neitzel says. "At the strategic level, we have learned nothing from the Afghanistan mission."