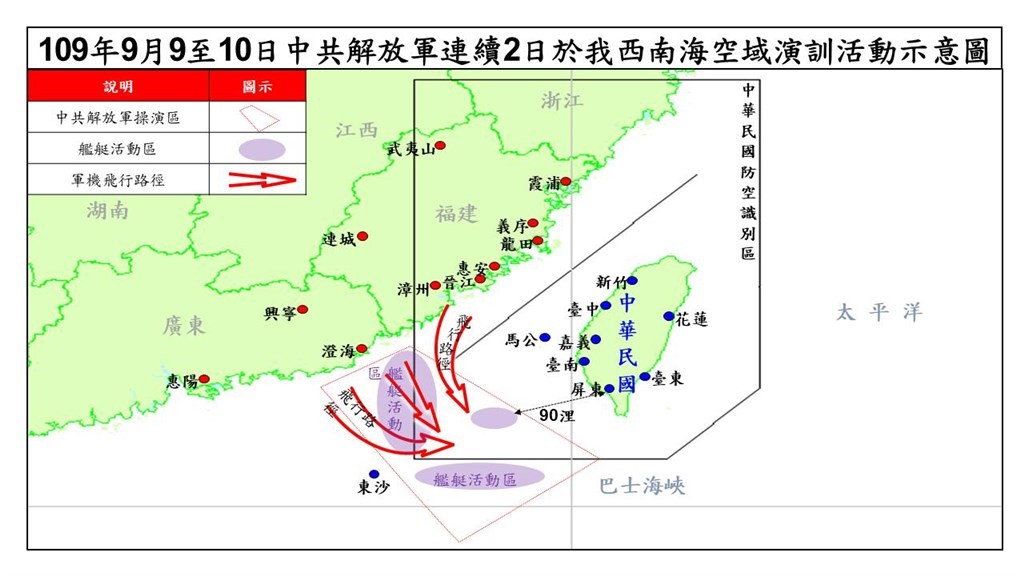 In addition, the defense ministry pointed out China's military actions are taking place on international air routes. Thus, these aggressive incursions into Taiwan's ADIZ "are affecting the safety of international flights," said Chang.

"We call on the Beijing authorities to order the PLA to exercise restraint," said Chang. He added the recent harassment of Taiwan's ADIZ has "aroused the resentment of the Taiwan people."

Chang called on China to "stop being troublemakers" and instead make contributions to regional peace and stability. He emphasized the military's joint intelligence, surveillance, and reconnaissance teams can instantly assess the enemy's disposition and assume combat readiness based on the situation.

He then reiterated that China should "never underestimate the determination of Taiwan's military to protect the homeland, nor should it ignore the firm will of the Taiwanese people to ensure freedom and democracy." Taiwan's military is confident and capable of defending national security, said Chang.

A defense ministry official was cited by CNA as saying that on Wednesday (Sept. 9), 30 PLAAF fighter jets and seven PLAN warships carried out training operations off the southwest coast of Taiwan. That day, PLAAF warplanes breached Taiwan's ADIZ on 21 occasions and the official added there was a similar number of incursions into the zone on Thursday (Sept. 10).

During the press conference, Major General Yang Ching-se (楊靜瑟) showed a schematic diagram of the PLA's exercises in Taiwan's southwestern ADIZ and pointed out that some of the warplanes came within 90 nautical miles (166 kilometers) of Taiwan. Yang said that China is carrying out large-scale joint air and sea exercises, but the People's Liberation Army Rocket Force (PLARF) and is amphibious units did not participate.

The aircraft that took part in exercises over the past two days include Chengdu J-10s, Sukhoi-30 (Su-30) fighter jets, and Shaanxi Y-8 transport aircraft. As for reports the PLA is encircling Taiwan's Dongsha Islands (Pratas Islands), the ministry said this was a "false media report" and had not taken place.

However, the ministry did state that PLAN warships have been spotted carrying out exercises to the north of the Dongsha Islands. This has raised fears that China could make good on its warning issued back in May that it could turn the military exercises into an invasion of the island.