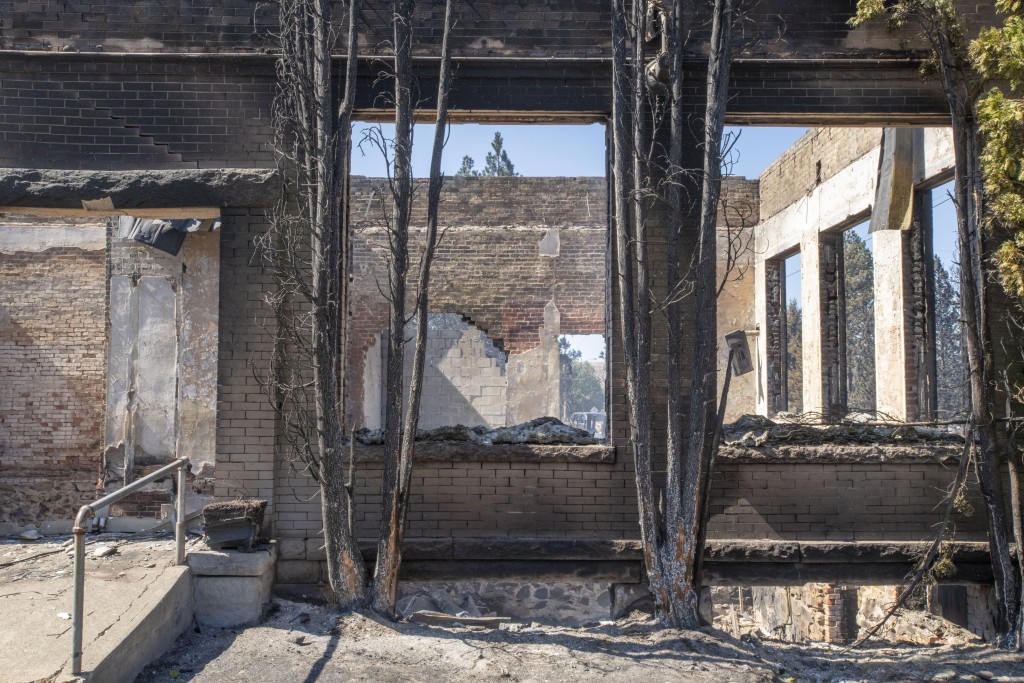 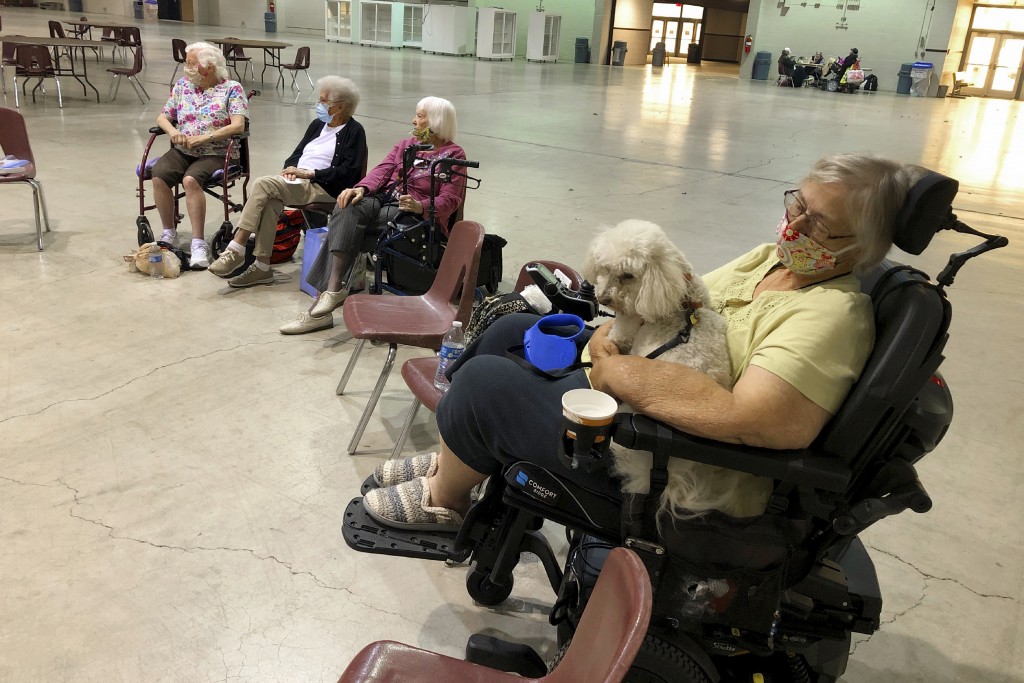 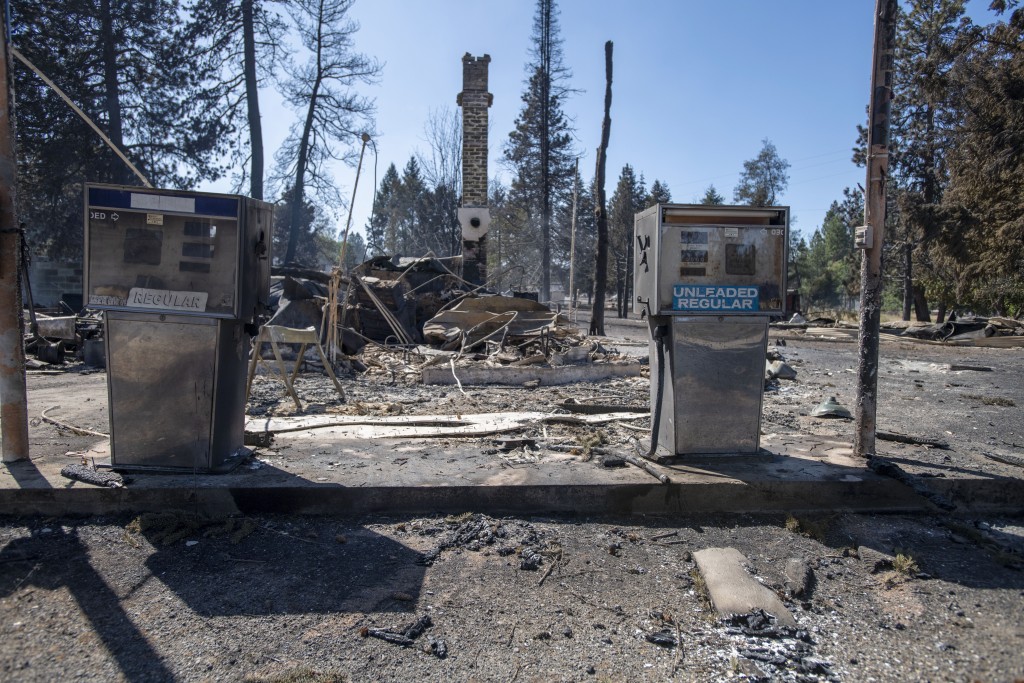 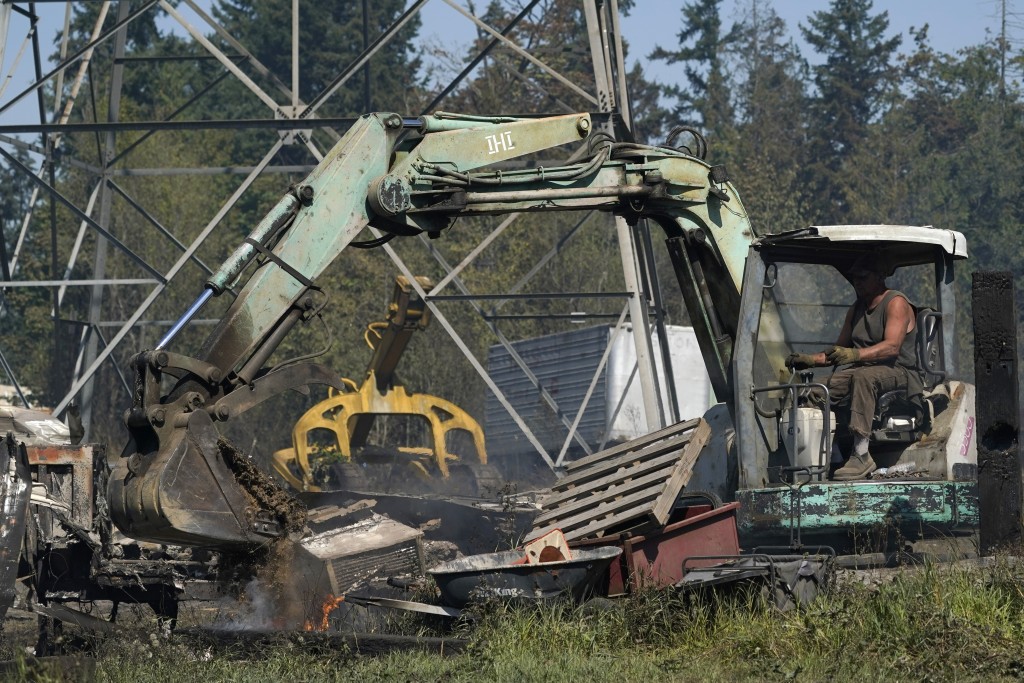 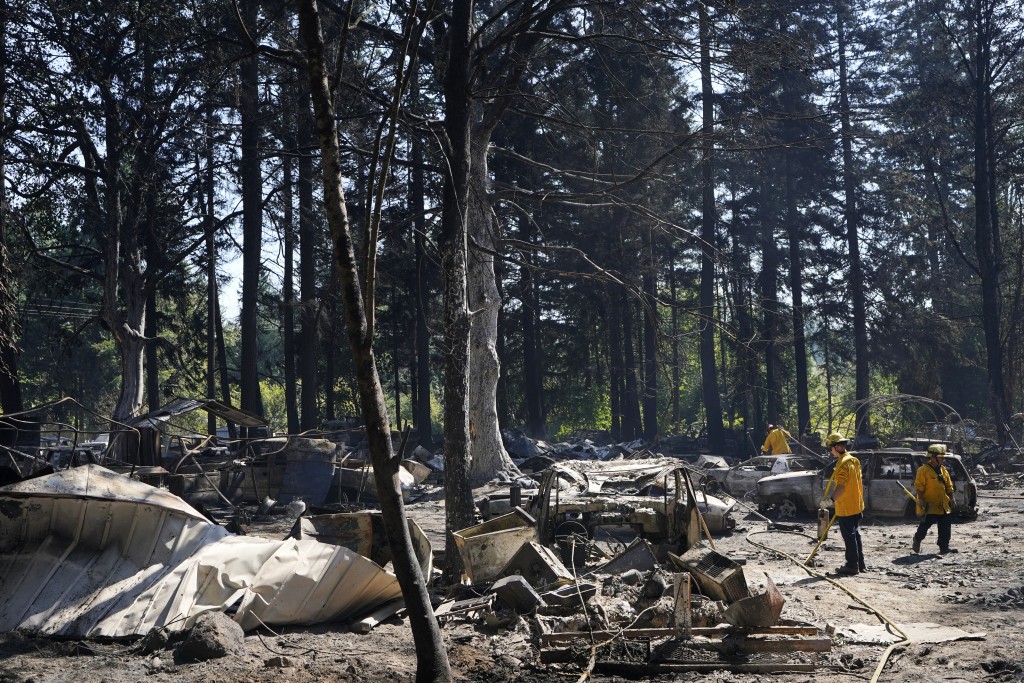 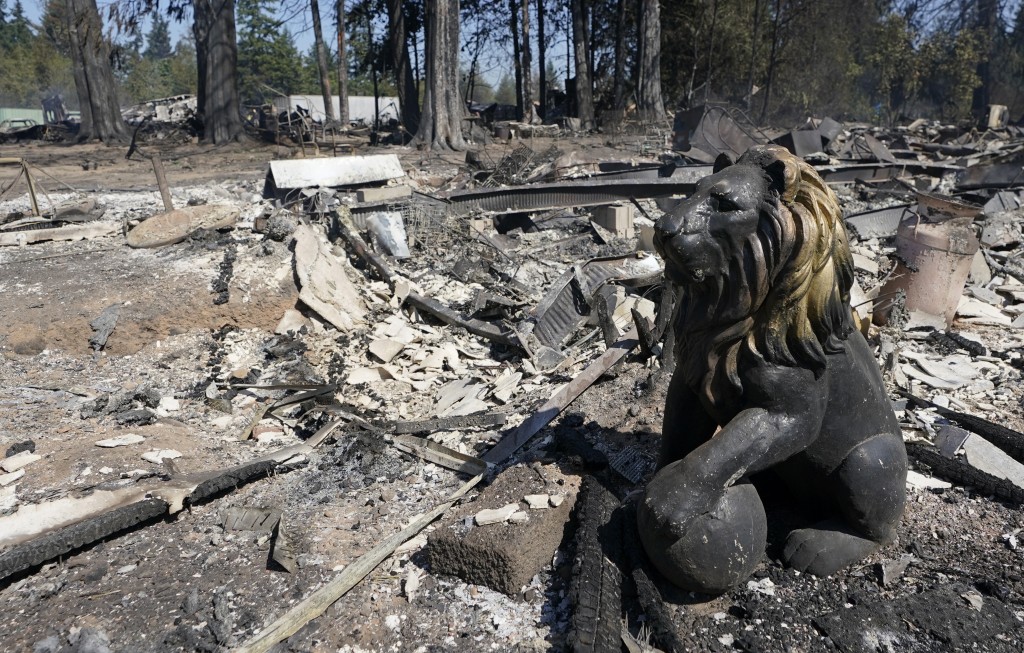 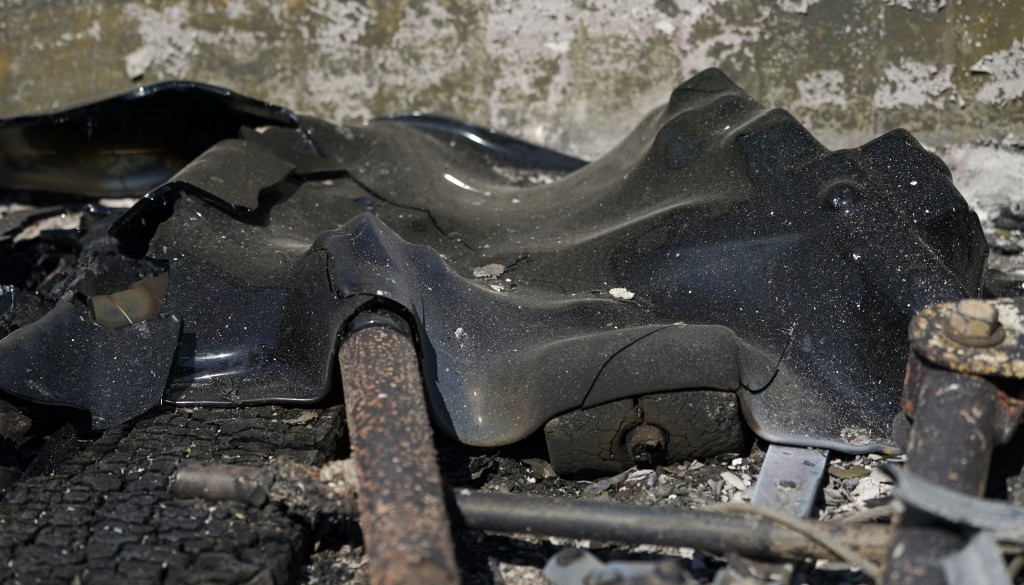 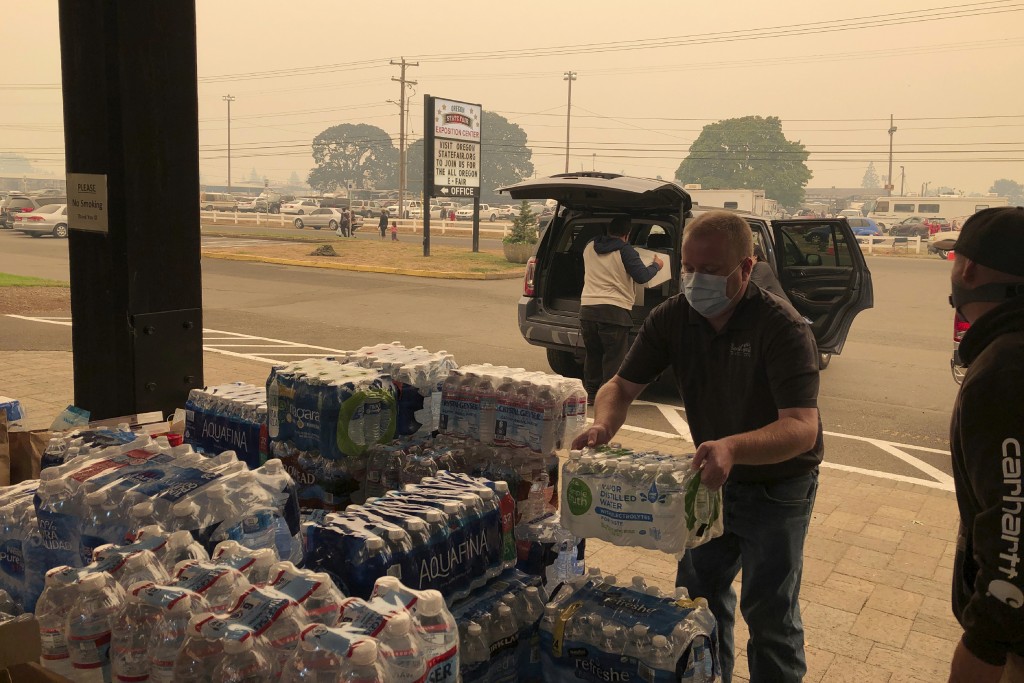 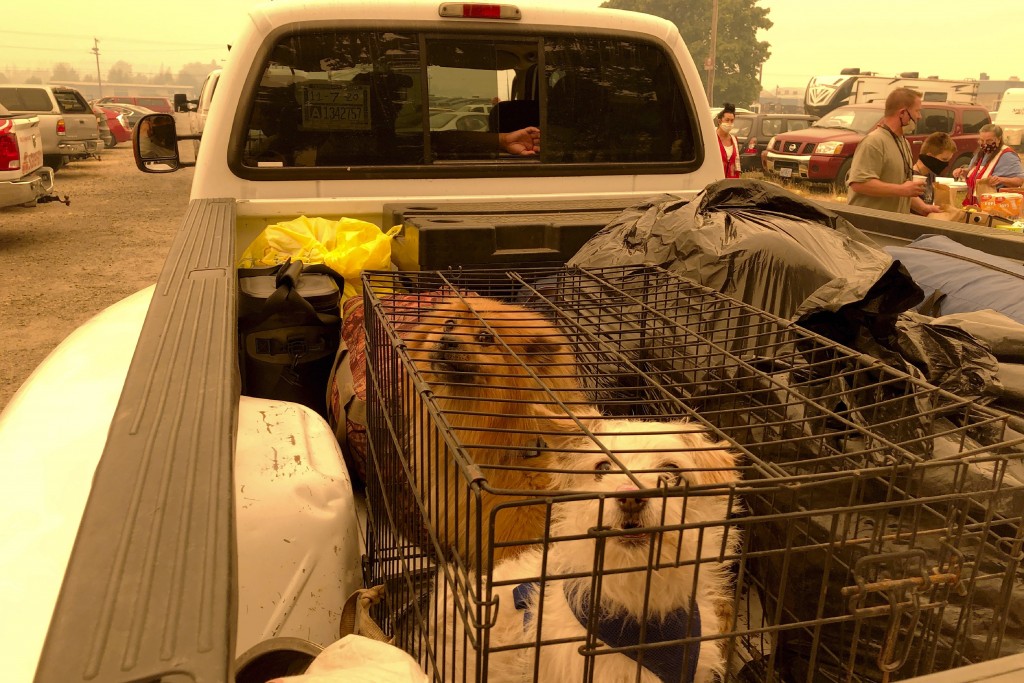 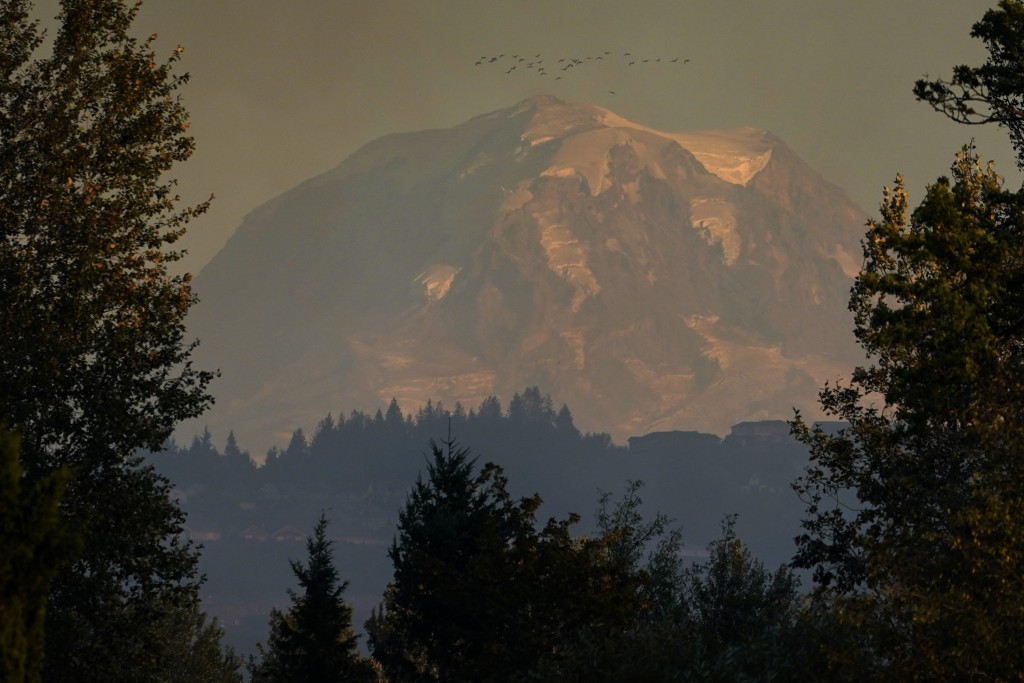 PORTLAND, Ore. (AP) — Winds gusting as high as 50 mph (80 kph) fanned dozens of catastrophic fires wildfires Wednesday across a large swath of Washington state and Oregon that rarely experiences such intense fire activity because of the Pacific Northwest's cool and wet climate.

Firefighters were struggling to try to contain and douse the blazes and officials in some places were giving residents just minutes to evacuate their homes. The fires trapped firefighters and civilians behind fire lines in Oregon and leveled an entire small town in eastern Washington.

The scenes were similar to the California's terrifying wildfire drama, where residents have fled fires raging unchecked throughout the state. But officials in the Pacific Northwest said they did not recall ever having to deal with so many destructive fires at once in the areas where they were burning.

Near Portland in Clackamas County, sheriff's deputies were traveling with chainsaws in their patrol cars to cut up fallen trees blocking roads — and giving residents of threatened rural areas and those near communities several minutes notice to evacuate.

“These winds are so incredible and are spreading so fast, we don’t have a lot of time," said Clackamas County Sheriff Craig Roberts.

Fires were burning in seven Oregon counties and rural and suburban homes miles away from Portland, Oregon's largest city, were under preliminary orders to prepare for possible evacuations. Three prisons were evacuated late Tuesday and Gov. Kate Brown called the state's blazes unprecedented.

“We know our losses are going to be great, but we know that Oregon is strong and will stand together," Brown said.

The Pacific Northwest is no stranger to wildfires, but most of the biggest ones until now have been in the eastern or southern parts of the region — where the weather is considerably hotter and drier and the vegetation more fire-prone than it is in the western portion of the region.

Fires in 2017 and 2018 crested the top of the Cascade Mountains — the long spine that divides dry eastern Oregon from the lush western part of the state — but never before spread into the valleys below, said Doug Grafe, chief of Fire Protection at the Oregon Department of Forestry.

“We do not have a context for this amount of fire on the landscape," he said. “Seeing them run down the canyons the way they have — carrying tens of miles in one period of an afternoon and not slowing down in the evening – (there is) absolutely no context for that in this environment.”

In Washington state, Gov. Jay Inslee said more than 330,000 acres (133,546 hectares) burned in Washington in a 24-hour period — an area larger than the acreage that normally burns during entire fire seasons that stretch from spring into the fall.

About 80% of the small eastern Washington farming town of Malden was leveled by flames from a fast-moving fire on Monday. Among the buildings that burned were the town's fire station, post office, City Hall and library.

He blamed hot weather, high winds and low humidity for the explosive growth of the fires in Washington state.

In Oregon, at least four major fires were burning in Clackamas County, a suburban county in Oregon that's a bedroom community of Portland. The entire county of nearly 420,000 people was put on notice to be ready to evacuate late Tuesday amid winds gusting up to 30 mph (48kph).

Another major fire in southern Oregon prompted evacuation orders in much of Medford, a city of about 80,000 residents.

And several huge blazes burning in Marion County, southeast of the state's capitol city of Salem, merged overnight — turning the sky blood red in the middle of the day. Thousands of people were braced to flee if evacuation orders emerged.

“It was pitch black dark out there — all you could see was red,” said Wendy Phelps-Chapman, activity director at the Marian Estates independent senior living center in Sublimity, Oregon, which evacuated its 160 residents on Tuesday.

Some school districts that had just begun distance learning canceled classes due to power outages or the threat of imminent evacuations or issued warnings Wednesday that classes might be canceled if fires spread closer.

Wind storms downed power lines and tens of thousands of people lost power in the northwestern Oregon and southwestern Washington.

Near Eugene, Oregon, dozens of people ordered to evacuate on Tuesday couldn't get out because fire debris was blocking roads, according to the Oregon State Fire Marshal. Fire crews eventually helped 46 people escape.

And on Monday, 70 people were hemmed in by fire along with firefighters near the small city of Detroit, Oregon, the Idanha-Detroit Fire District said in a Facebook post.

An evacuation by helicopter was requested but the smoke was too thick for that kind of rescue operation, so they eventually escaped on dirt roads used by the U.S. Forest Service.

“We do not have any information on threatened or burned structures at this time,” the district's social media post said. “We apologize for not being able to have more accurate information. Our main focus was protecting the lives of our community members, campers, and firefighters.”