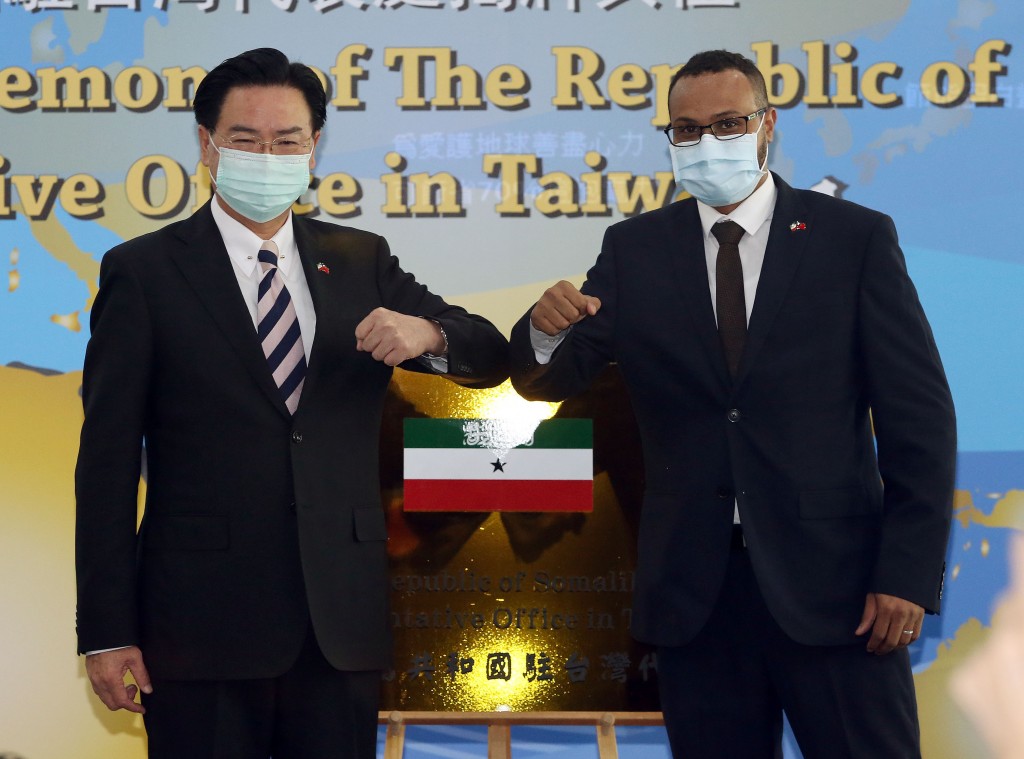 TAIPEI (Taiwan News) — The Somaliland Representative Office in Taiwan began its operations Wednesday (Sept. 9) despite opposition from Somalia, which claims sovereignty over the self-governing East African territory, and China.

The plaque-unveiling ceremony for the Somaliland office was held on Wednesday morning in a building owned by Taiwan’s Ministry of Foreign Affairs, but the office itself is located in a residential building in the capital. Mohamed Hagi, Somaliland's first envoy to Taiwan, declined to comment on the Chinese hostility seen since Taiwan and Somaliland pledged to strengthen ties in July.

“The bilateral accord between Somaliland and Taiwan is based on common values of freedom and democracy,” remarked Hagi, who arrived in early August to prepare for the new office. He stressed that the bilateral relationship upholds “mutual assistance that will never expose any harm whatsoever to the interests of other countries, but rather contributes to international peace and regional economic activities.” Taiwanese Foreign Minister Joseph Wu (吳釗燮) declared in July that Taiwan and Somaliland were establishing reciprocal representative offices as part of a treaty signed by the two governments to advance ties in a wide array of areas. The offices do not reflect diplomatic relations but are of a highly official nature, Wu stated at the time, adding that bilateral talks had commenced months ago.

Somaliland is looking forward to collaborations on trade, security, infrastructure, health, and agriculture, said Hagi. Stating that the territory's natural resources have great potential, he encouraged Taiwanese companies to invest in the territory, adding that the government is prepared to offer tax exemptions and other incentives to attract foreign investment.

“Our countries have collaborated on healthcare, education, and maritime security since 2019,” remarked Wu. “The opening of the Somaliland Representative Office marks a new chapter in Taiwan-Somaliland relations.” Acknowledging that both Taiwan and Somaliland are facing “external pressures” that threaten their shared values, Wu stated that the government looks forward to exploring common interests and mutual benefits. He cited fisheries, energy, and agriculture, among other fields as examples.

In a pre-recorded video, Somaliland President Muse Bihi Abdi said it is time for the country to initiate efforts to strengthen relations with Taiwan and all other nations in the world in order to facilitate bilateral trade and economic cooperation. “Our country promotes universal peace and fosters better relations with our neighbors, the rest of the African nations, and the world at large.”

After initially declining to meet with China’s ambassador to Somalia, Qin Jian (覃儉), Abdi reportedly received a delegation from the Chinese Ministry of Foreign Affairs in August in what appeared to be an attempt by Beijing to forestall the territory's rapprochement with Taiwan.

After the meeting, Somaliland's Presidential Palace issued a statement saying that the government would maintain a good relationship with China based on mutual respect and cooperation in the economic, trade, and development realms. The Republic of Somaliland has officially opened its Representative Office in Taiwan. pic.twitter.com/aEPcdt9cy3