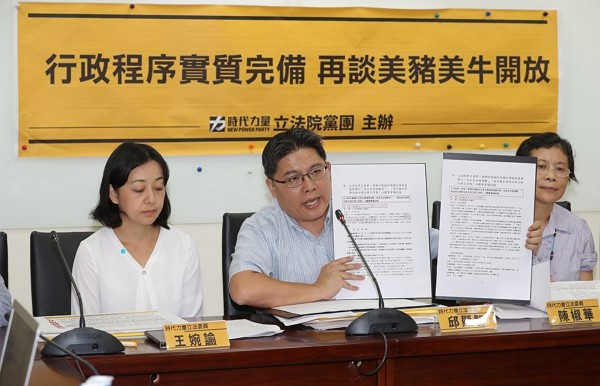 TAIPEI (Taiwan News) — In response to the government's recent announcement that it is opening Taiwan to U.S. beef from cattle over 30 months old and pork containing ractopamine, the New Power Party (NPP) on Tuesday (Sept. 8) took the administration to task for failing to consult the public before making the sudden decision.

President Tsai Ing-wen's (蔡英文) announcement on Aug. 28 that Taiwan would lift import restrictions on certain U.S. pork and beef products drew backlash from some of the public and opposition lawmakers. Although the policy change was hailed by U.S. scholars as a milestone in the countries' relationship, Taiwanese health experts have expressed concerns over the health risks of ractopamine, an animal feed additive used to produce American meat.

During a press conference on Tuesday, NPP legislators Chiu Hsieh-chih (邱顯智), Claire Wang (王婉諭), and Chen Jiau-hua (陳椒華) criticized the Tsai administration for not first discussing the policy with the public, reported New Talk. They pointed out that the seven-day notice was an even shorter period than the 60 days given by former President Ma Ying-jeou (馬英九) when he allowed U.S. meat imports in 2010, which also drew heavy criticism.

Chiu stressed that there should have been a minimum 60-day notice and that Tsai's exception for U.S. imports goes against the government's basic principles. He added that both the Ministry of Health and Welfare and the Council of Agriculture had both turned down his invitation to join the press conference, which shows their hesitance to answer questions about the change.

In addition, Chiu said past legislative reviews have all concluded that no meat products containing ractopamine should be imported. If the Tsai administration insists on avoiding discussions with citizens, he said, then the Legislative Yuan's recommendations will be rendered pointless, reported CNA.