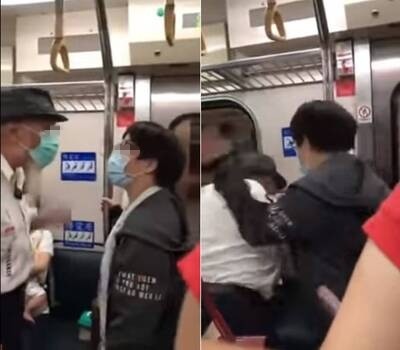 TAIPEI (Taiwan News) — Video surfaced on Saturday (Sept. 5) showing a fight on a Taiwanese train that broke out between an elderly man and a young woman after she placed her hamster on a priority seat.

At about 5:25 p.m. on Saturday, a young woman placed a cage holding her pet hamster on a blue priority seat while taking a Taiwan Railways Administration (TRA) train bound for Xike Station in New Taipei City. An elderly man with a long, white beard protruding from his face mask confronted the woman over her rodent's seating arrangement and asked, "Did your pet buy a ticket?"

In response, the woman said "You're crazy" and told him to "stop meddling." The man then accused her of hurling a "blatant insult" and labeled her as "crazy."

Next, the man tried to seize the hamster's cage, and she immediately grabbed him to protect her precious pet. A scuffle then ensued, with the woman repeatedly hurling rabbit punches at the elderly man, prompting other passengers to shout in protest.

Fortunately, one male bystander quickly intervened and separated the two combatants. According to the person who uploaded the video, the woman left the scene in tears, while the man shouted for the railway police to deal with the situation, reported Liberty Times.

One netizen pointed out that TRA rules require pet owners to place their animals in cages under the seat. Given that it was a priority seat, normally reserved for the handicapped, the elderly, and pregnant women, another netizen joked "Is the hamster's leg broken? Is it an old hamster? Is it a pregnant hamster?"

According to the TRA's regulations regarding pets, with the exception of guide dogs, passengers who wish to carry cats, dogs, rabbits, fish, shrimps, birds, and other pets onboard must place them in cages that are 55 cm wide, 45 cm wide, and 38 cm high. They must be placed under one's seat after boarding.