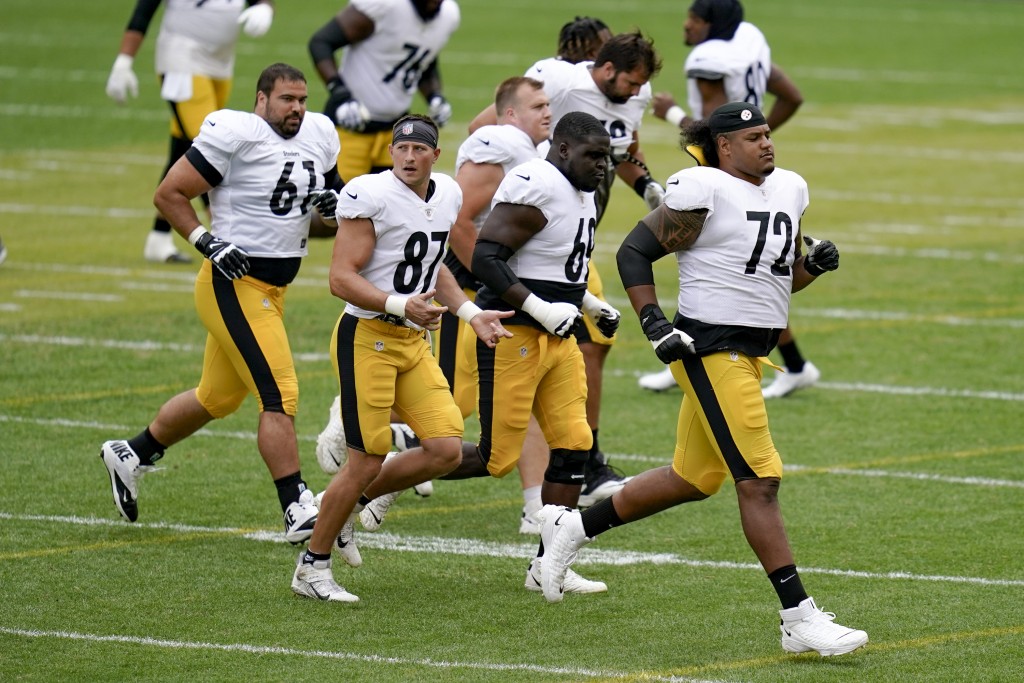 PITTSBURGH (AP) — The race between Chukwuma Okorafor and Zach Banner to be the Pittsburgh Steelers' starting right tackle appears to be a dead heat with just over a week to go before the season opener against the New York Giants.

Asked directly if one is ahead of the other, Tomlin said it's likely the depth chart will feature an “OR” between Banner and Okorafor's names when it is released on Monday.

“I think it’s been a challenging decision for us because both guys are capable,” Tomlin said. “Both guys have been consistently above the line in their performance. Those are good problems to have.”

Tomlin didn't rule out potentially playing both if one of them struggles. Banner also offers some versatility. He frequently lined up as a third tight end in short-yardage situations last year.

“I think we’ve seen two guys who are capable NFL starters at that position battling it out,” Tomlin said. “That’s why we are not in a hurry to make a decision from my perspective.”

The gregarious Banner bounced around early in his career but appears to have found a home in Pittsburgh. A fourth-round draft pick by Indianapolis in 2017, Banner has developed a cult following because of his massive size (he's listed at 6-foot-8 and 360 pounds, but says he's dropped to around 325) and consistently received an ovation at Heinz Field whenever he reported as an eligible receiver. However, he's ready for the novelty of him being on the field to wear off. He's also grateful he won't be sweating it out when rosters are trimmed Saturday, a first for him.

“I am going to be on the (roster),” Banner said. “I’m not going to be in a hotel waiting for my phone to ring. I’m not saying that is what I’m settling at. I want to be great, I want to play, I do want to be a starter. I am extremely competitive.”

Okorafor has been groomed for this spot since being selected in the third round by the Steelers in 2018. He's been steady when called up and has looked more comfortable pass blocking than Banner, who admits it has been a point of emphasis during training camp, especially with quarterback Ben Roethlsiberger back on the job after missing most of last season with a right elbow injury.

“You’re talking about protecting one of the most important people in the city of Pittsburgh,” Banner said of Roethlisberger. “You can’t make up for sacks. If you make a mistake on the offensive line, people could get hurt. He’s just making an in-depth decision. Whichever decision he makes, like I said, if I lost, I’ll feel a little hurt, but then, I need to know what my role is. If I win, it will be exciting, but the minute you go out there and mess up, you’re done. The pressure stays on all the time.”

NOTES: Pro Bowl RG David DeCastro did not participate in the walkthrough on Friday. DeCastro spent most of camp dealing with a lower-body injury. Tomlin said it's likely DeCastro may be limited early next week. The Steelers have an extra day to prepare for the Giants because they don't play until Monday night, Sept. 14.