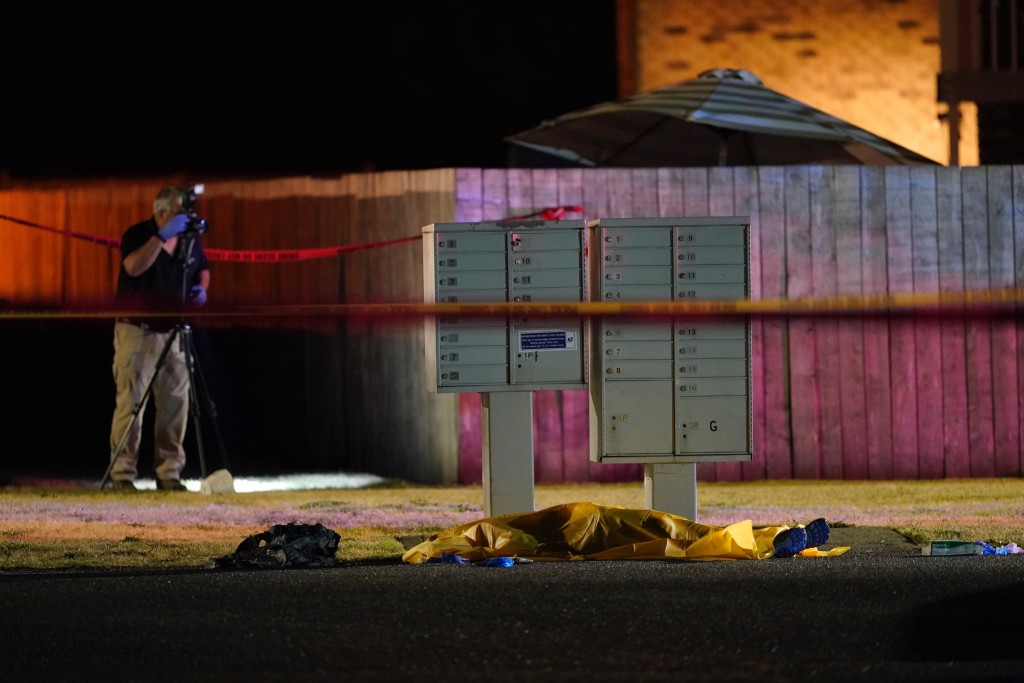 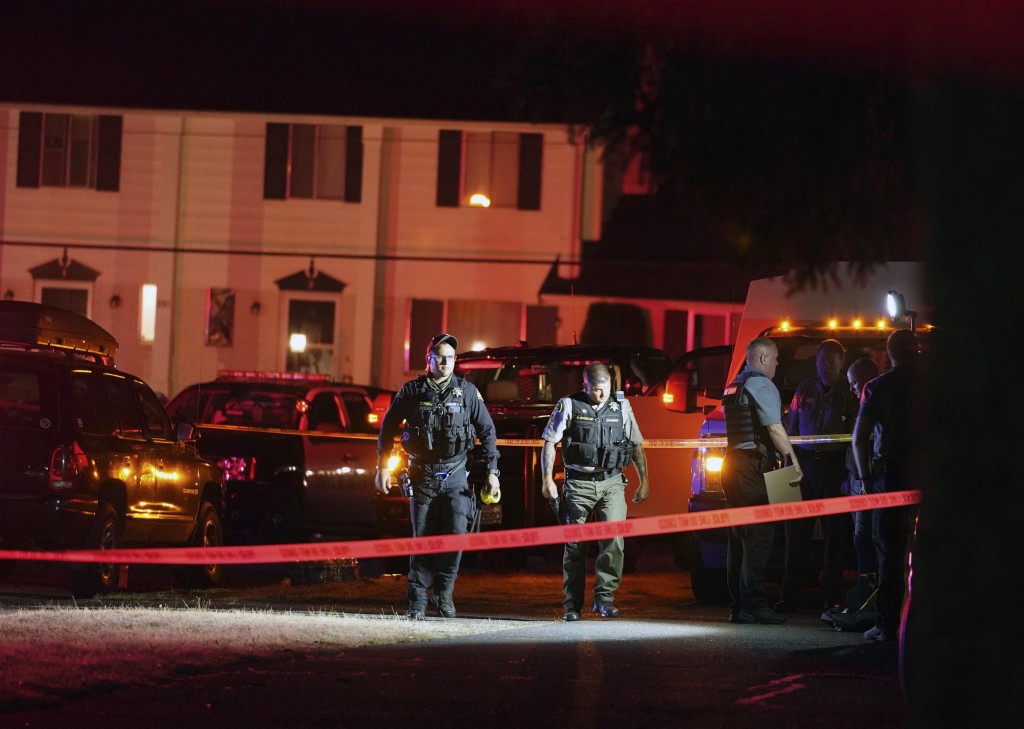 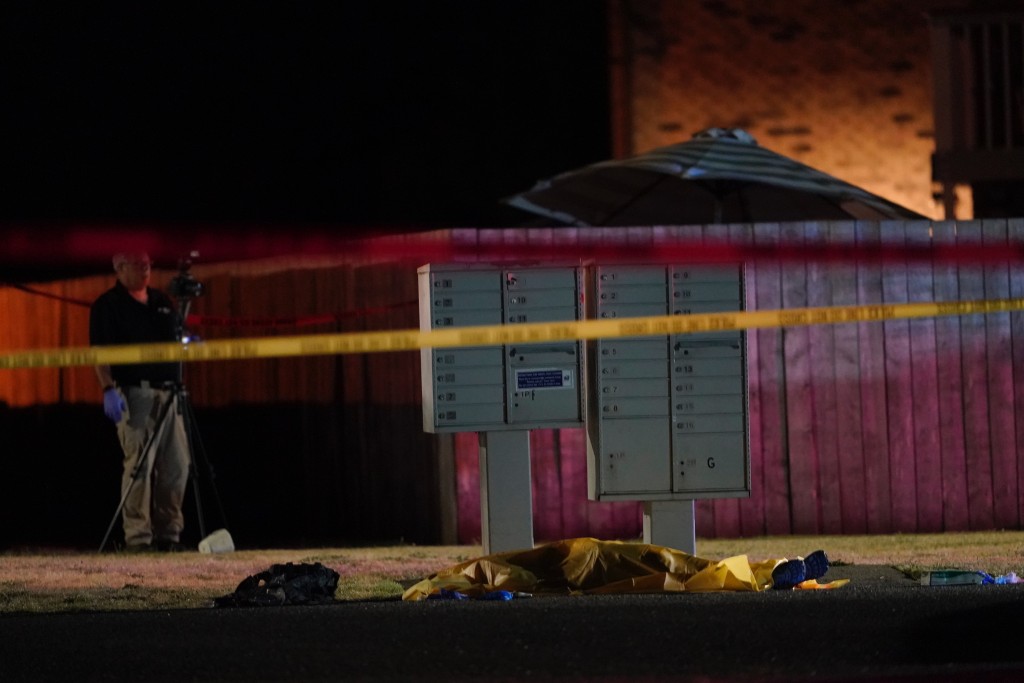 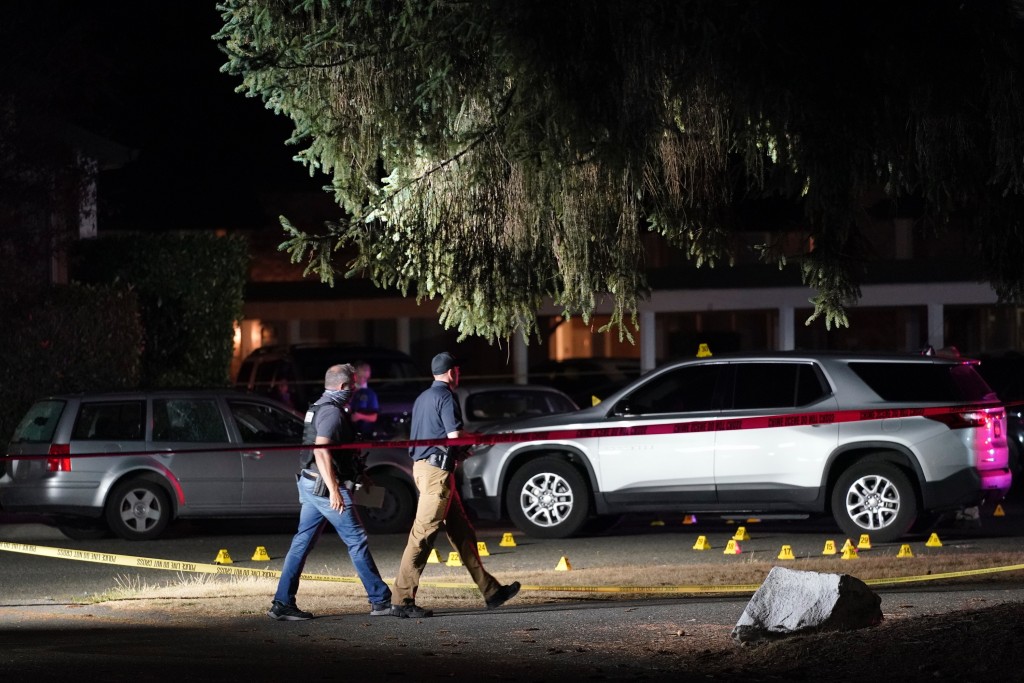 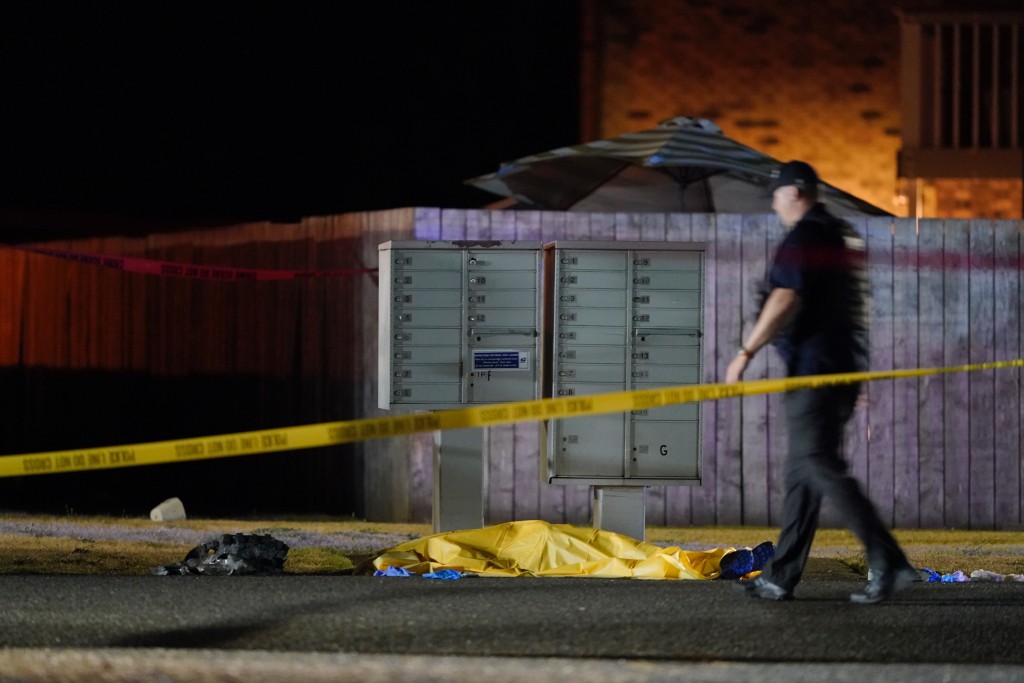 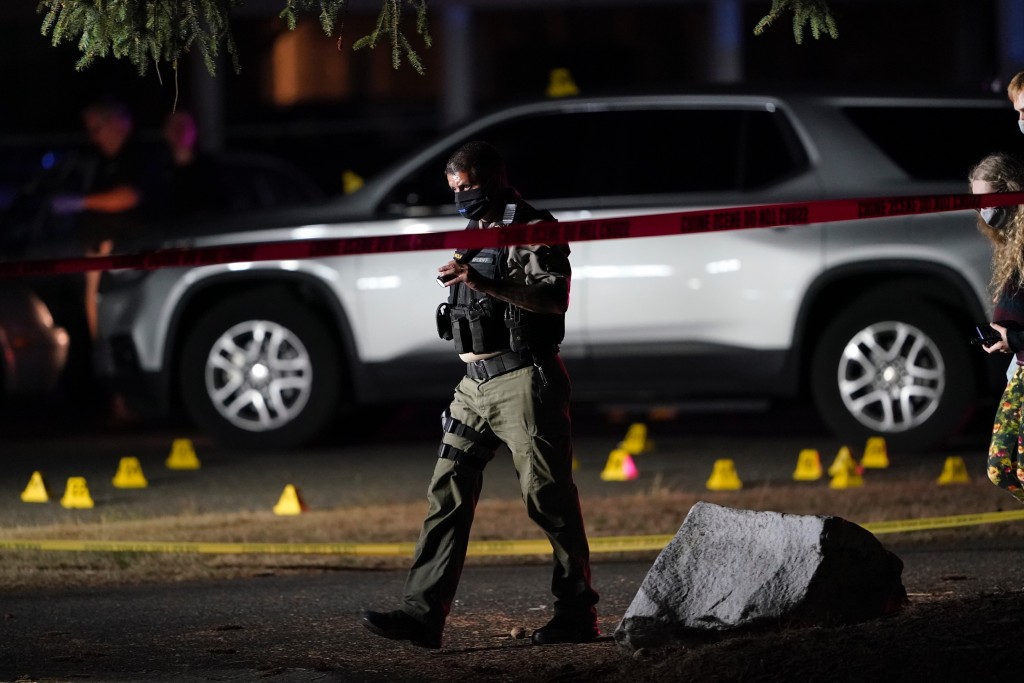 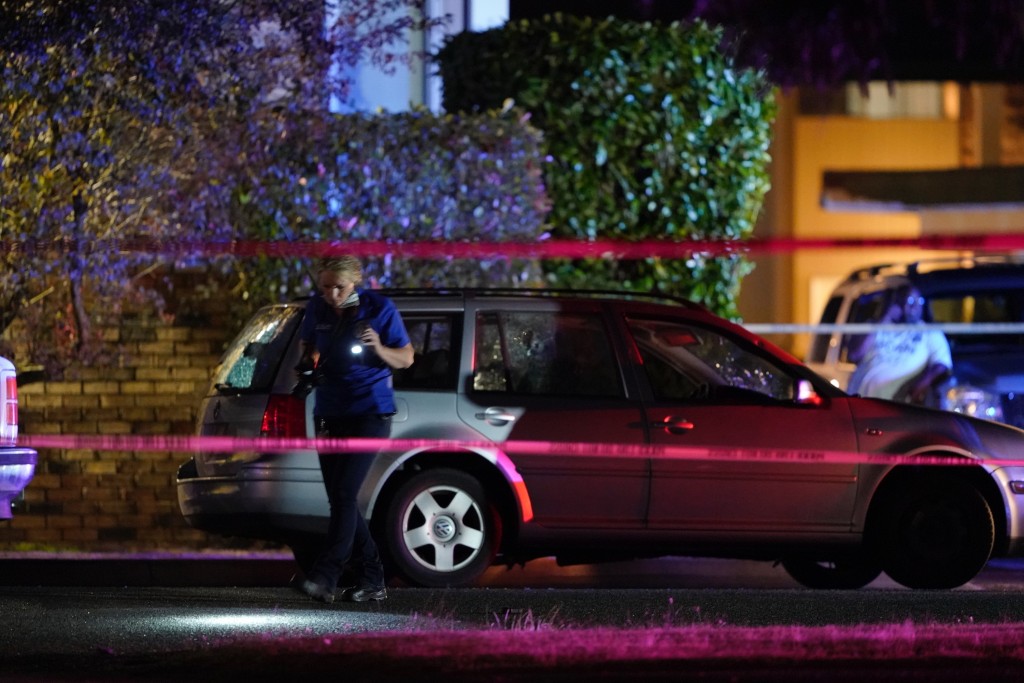 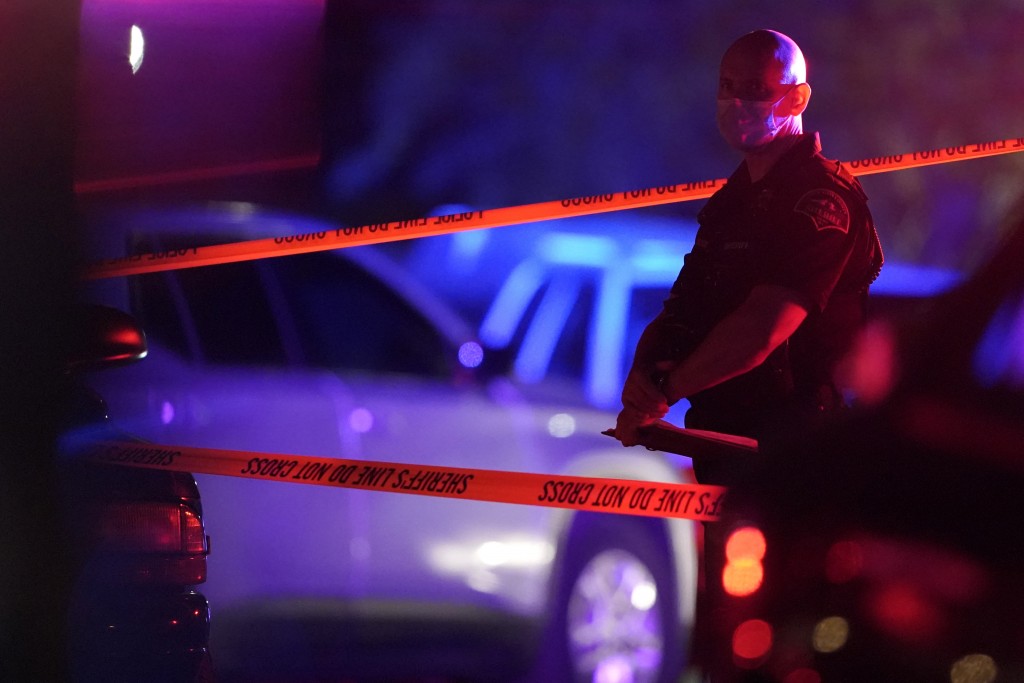 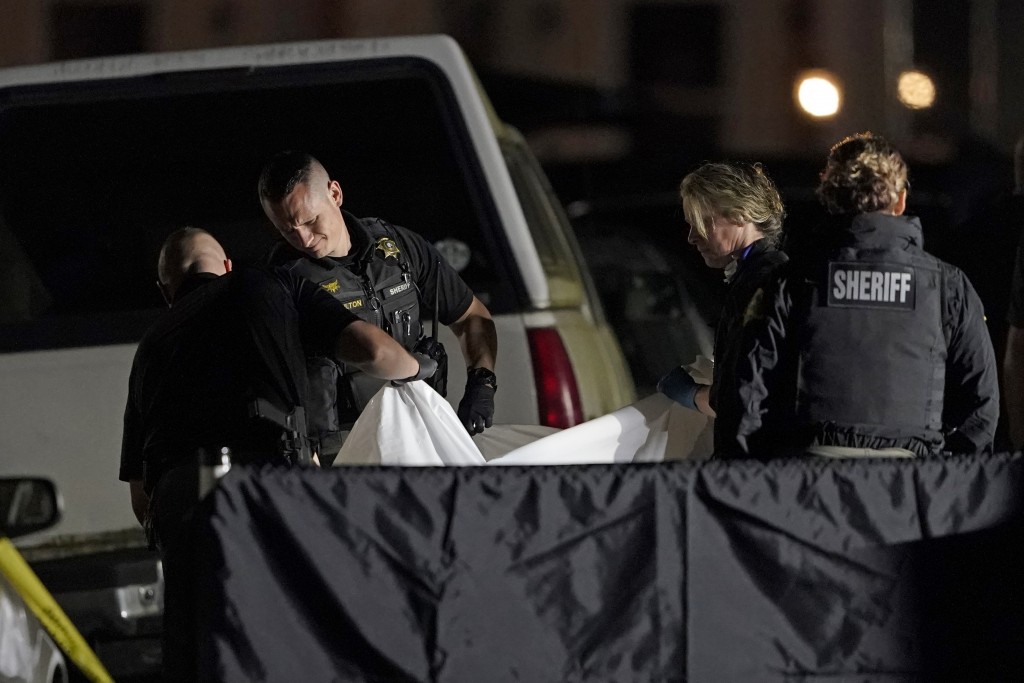 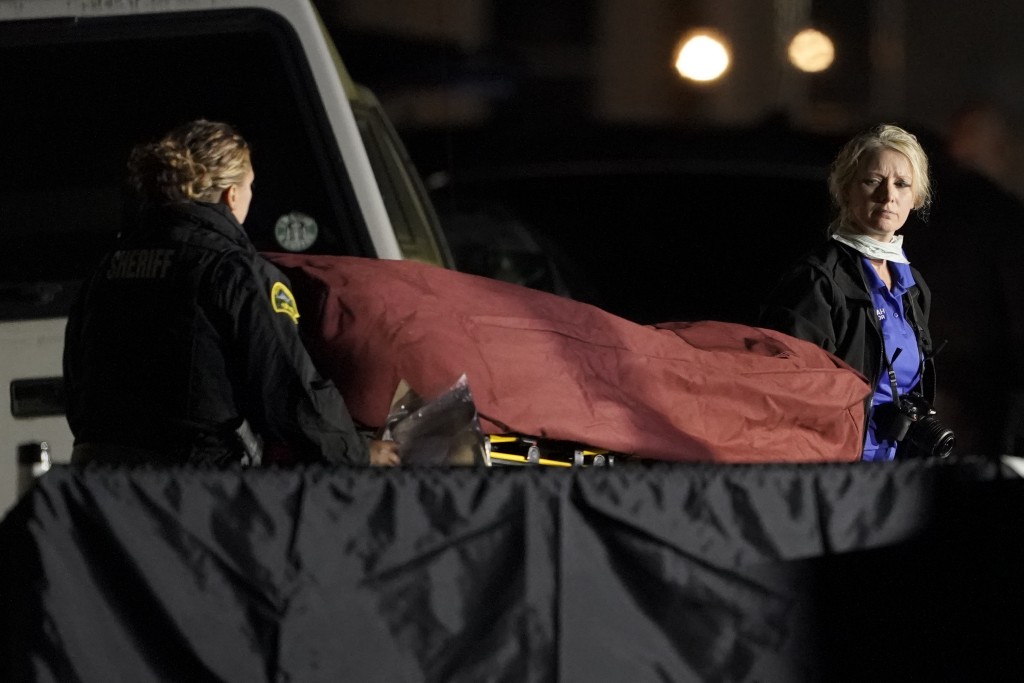 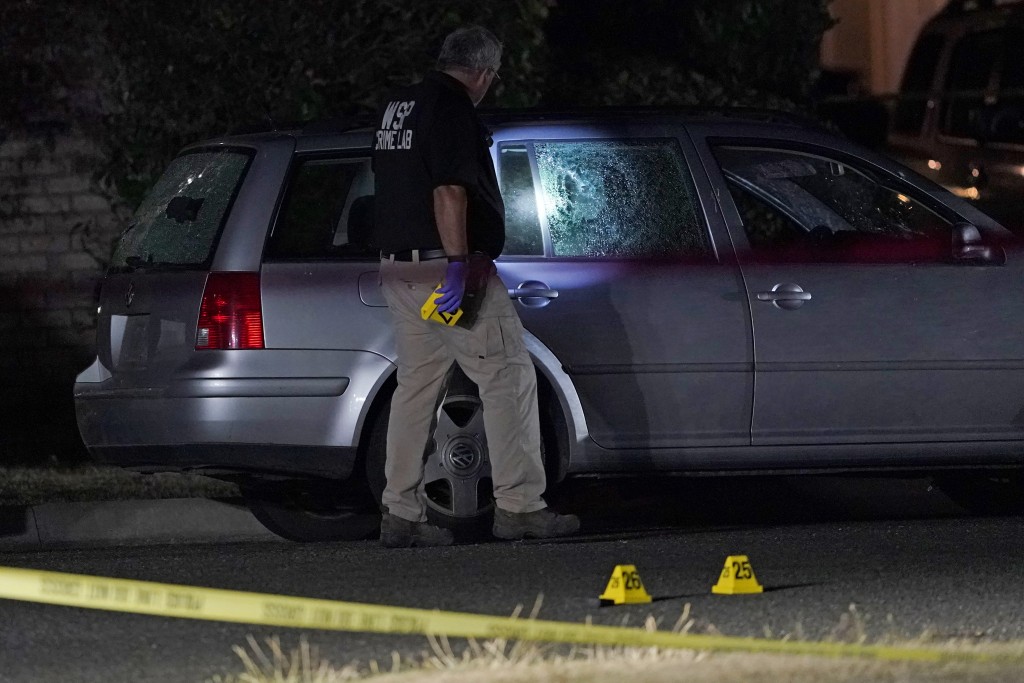 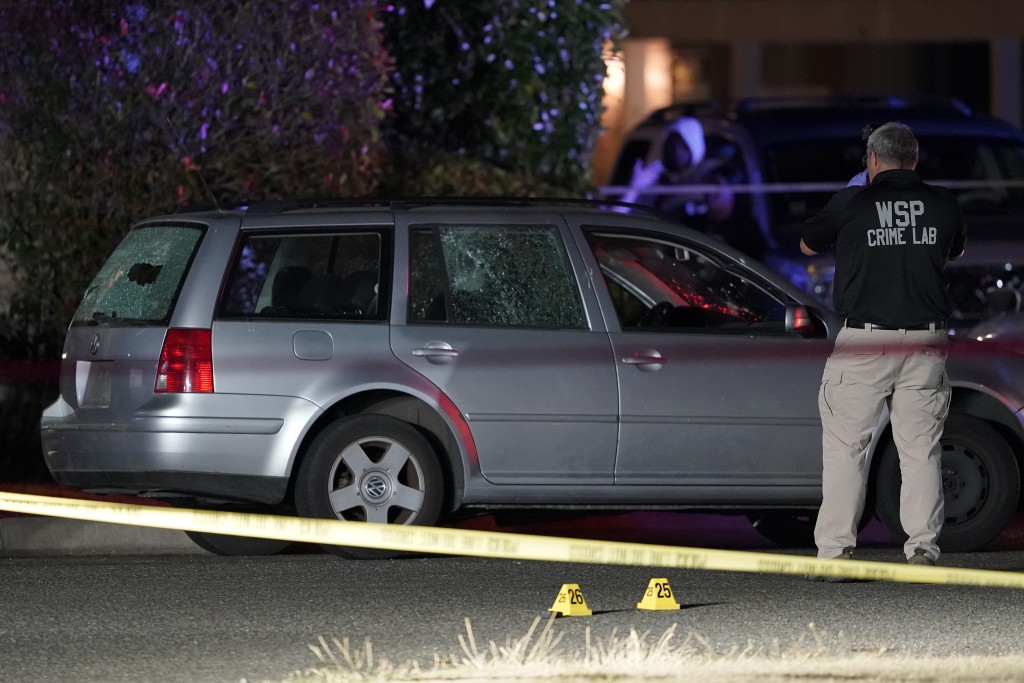 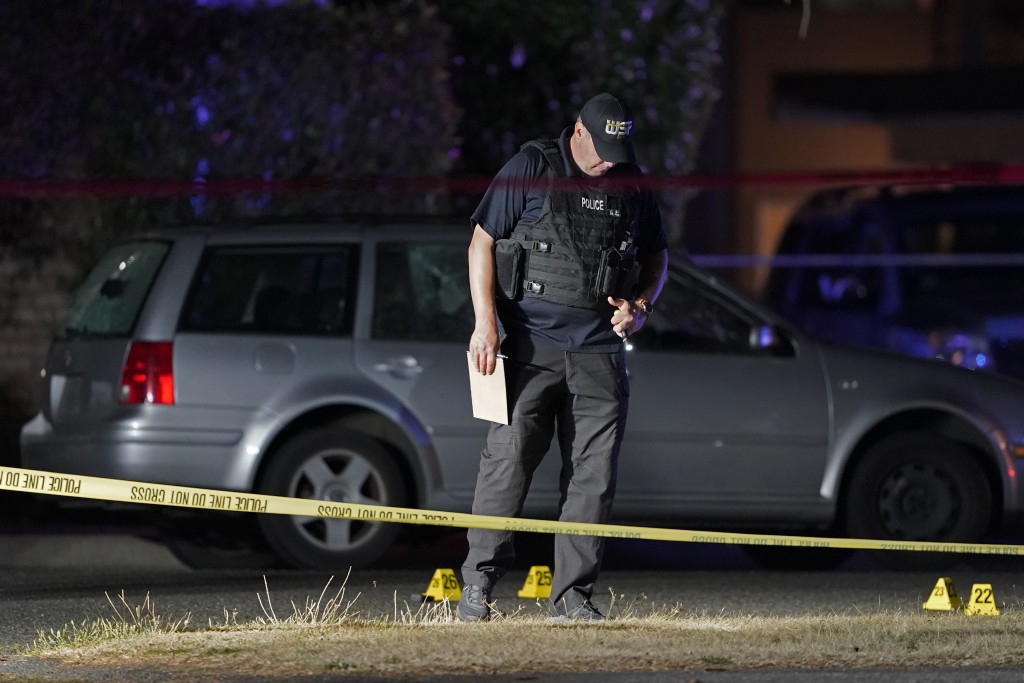 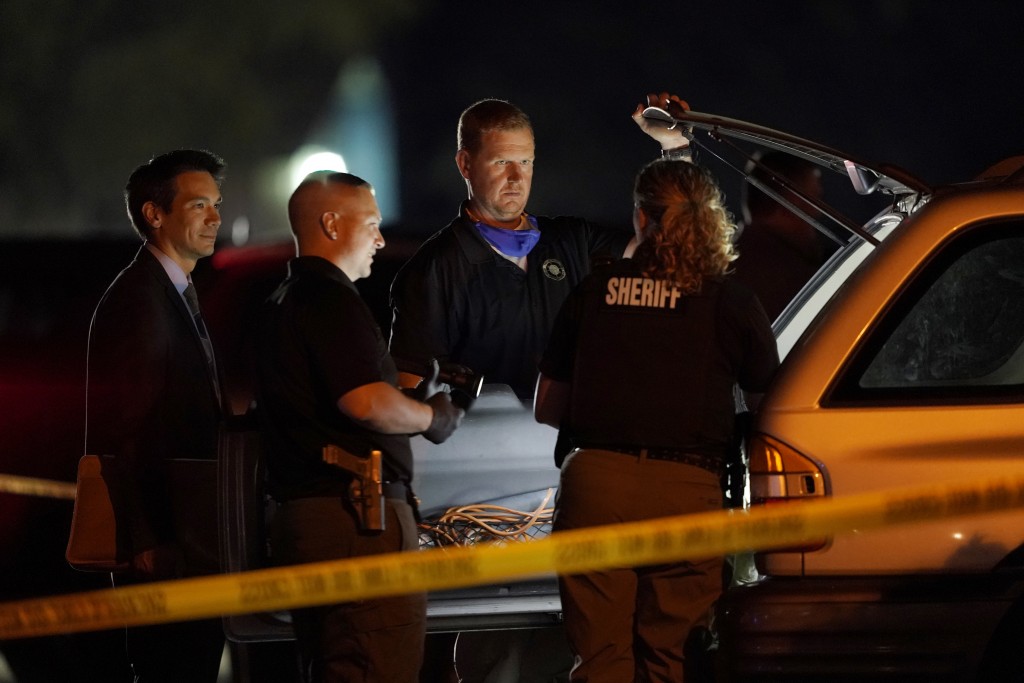 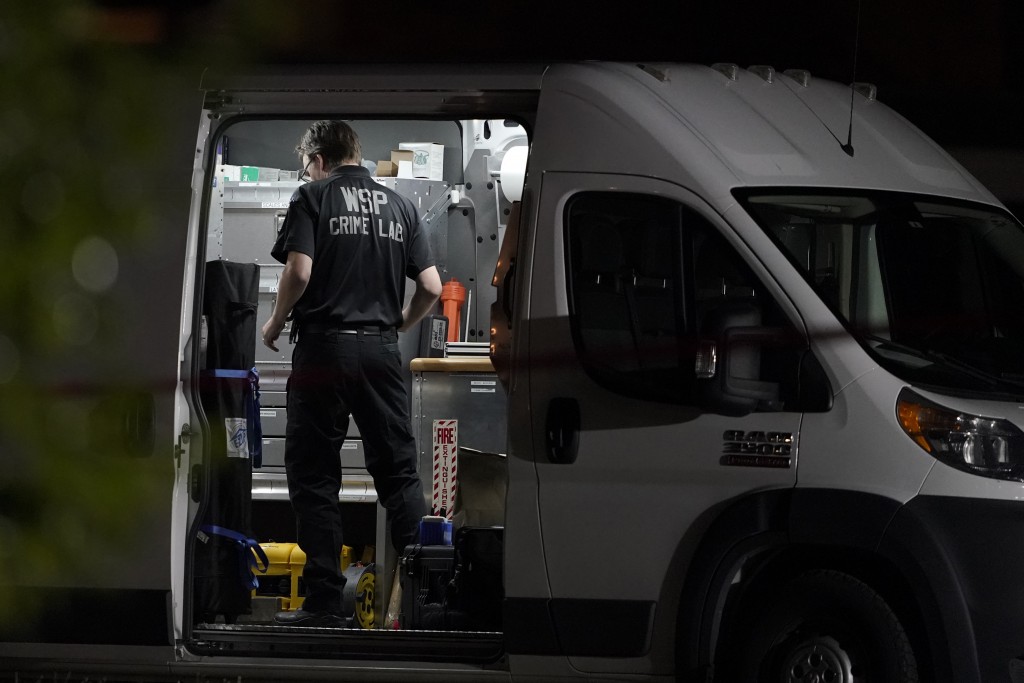 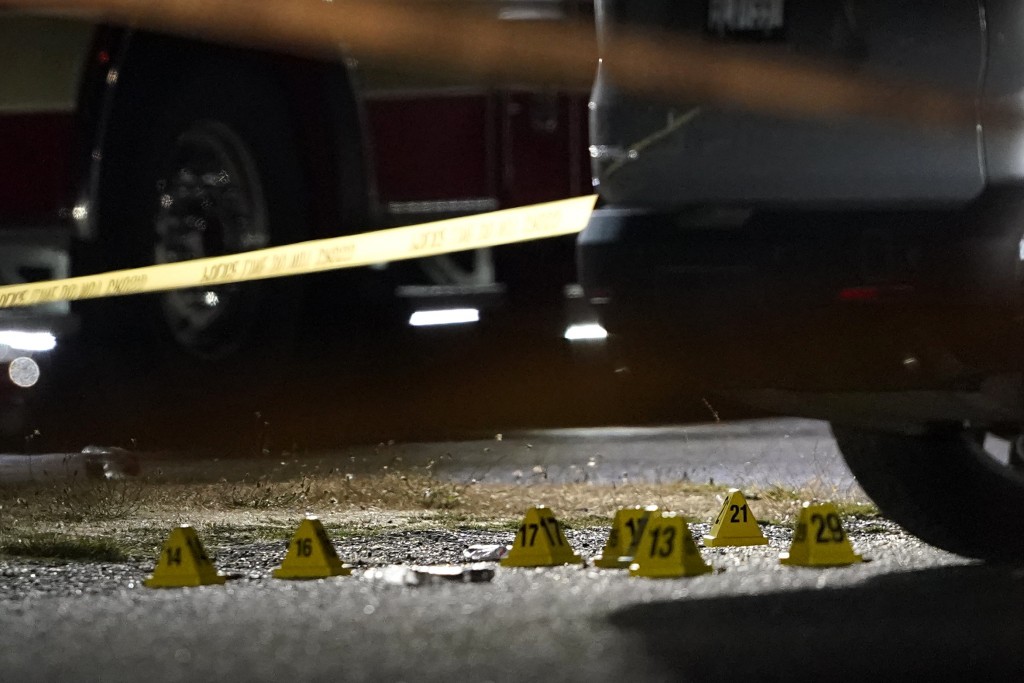 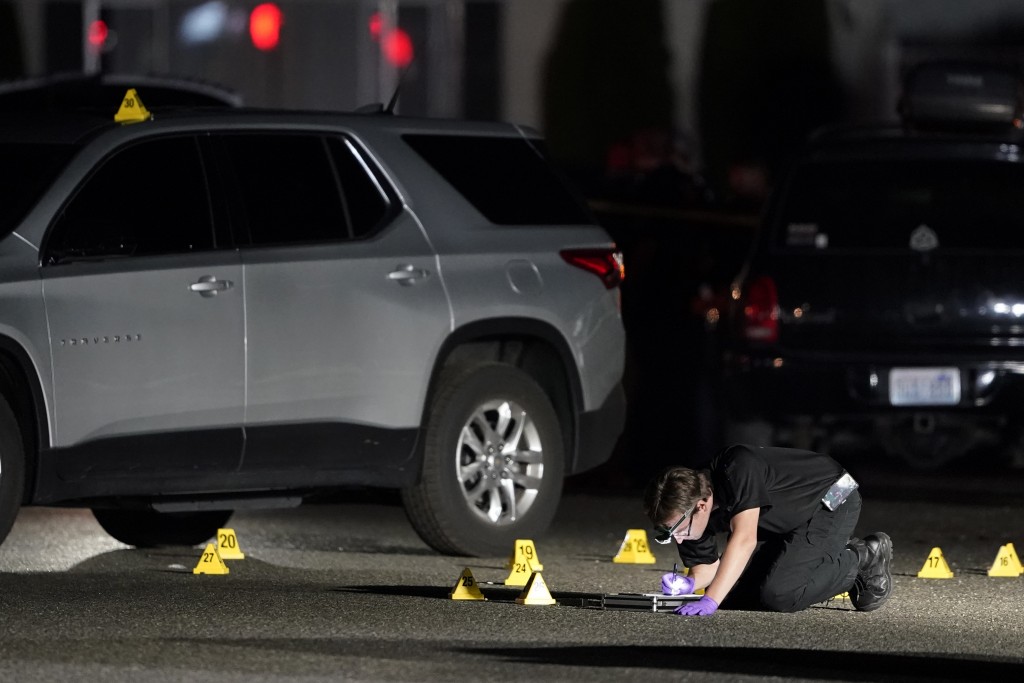 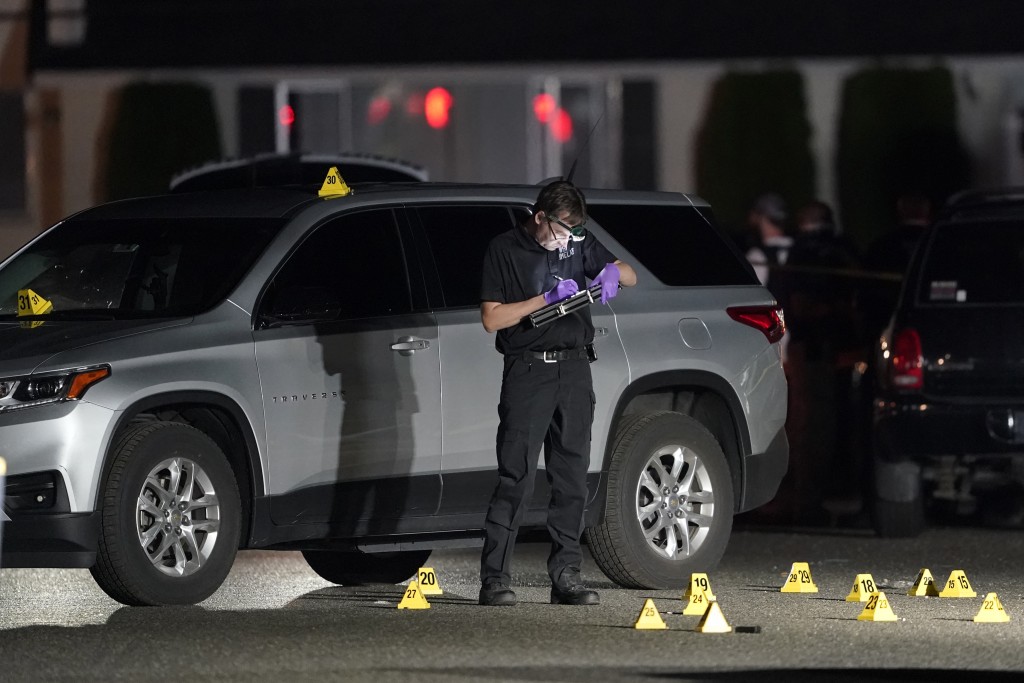 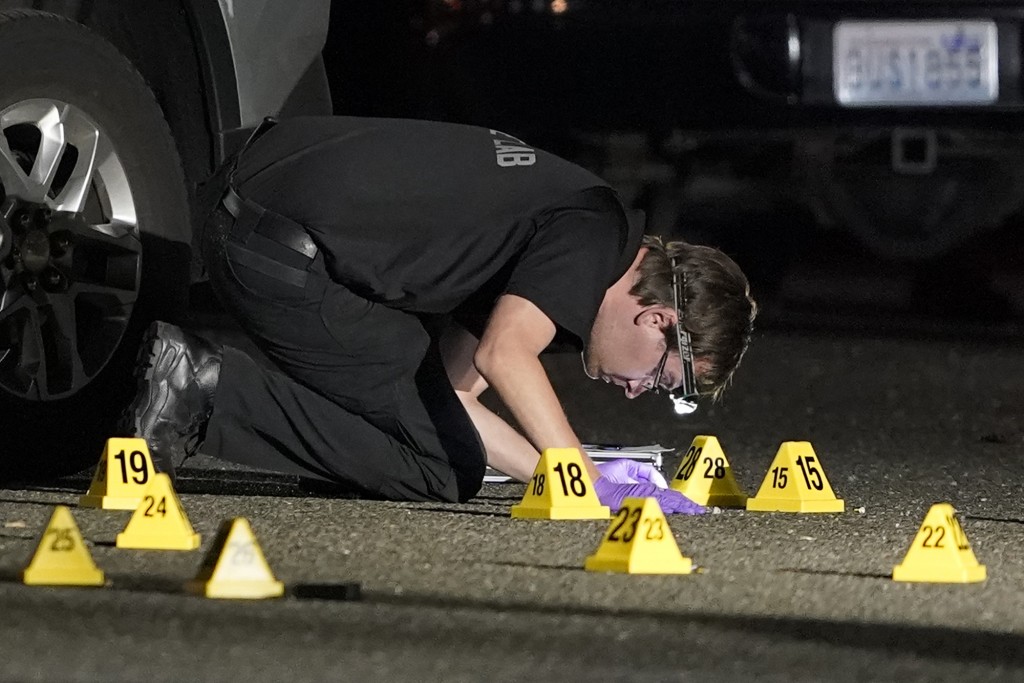 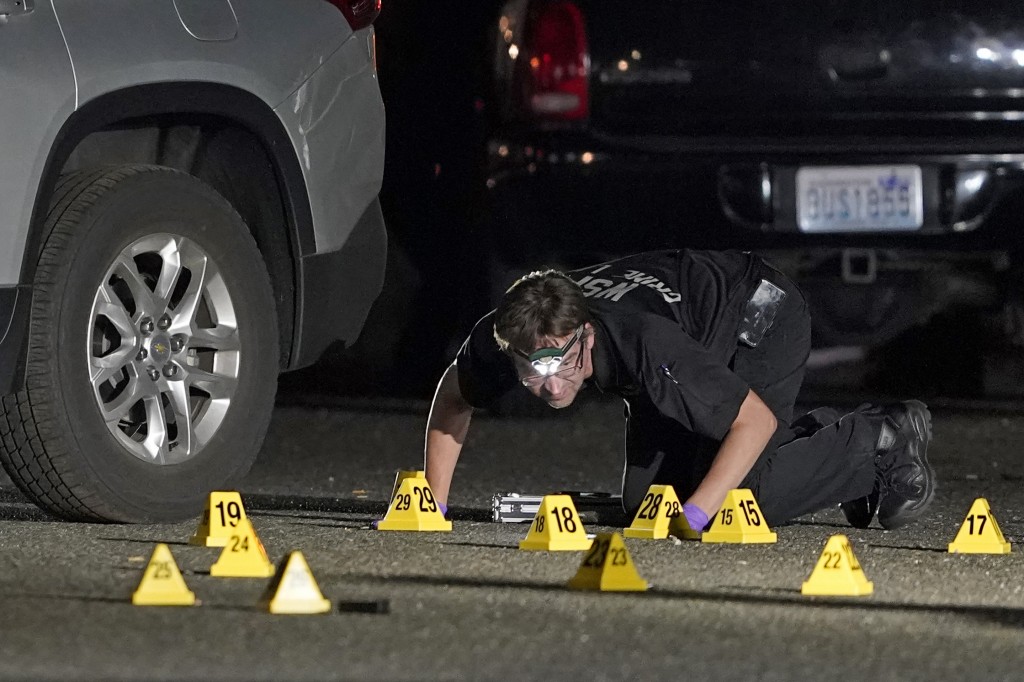 LACEY, Wash. (AP) — A man who said he believed a civil war was coming to America and was suspected of killing a right-wing protester in Portland, Oregon, died in a hail of police gunfire in neighboring Washington state, officials and witnesses said.

The killing of Michael Forest Reinoehl shook a quiet suburb of Olympia, Washington Thursday evening, with bystanders ducking for cover behind automobiles from dozens of gunshots as four agents serving on a U.S. Marshals Service task force opened fire at Reinoehl.

Reinoehl, 48, was armed with a semi-automatic handgun but authorities have not determined if he fired any shots, said Lt. Ray Brady of the Thurston County Sheriff’s Department.

A video shot during the immediate aftermath showed a man lying motionless on a street next to a row of mailboxes with law enforcement officers in tactical gear and automatic rifles milling around. After a couple of minutes, one man performed chest compressions on Reinoehl.

“Yeah, I don't think he's going to make it,” Jashon Spencer narrated on the video that he posted on Facebook showing the scene that unfolded in front of a small apartment complex.

Brady said he did not believe the officers involved in the shooting had body cameras or dashboard cameras on their vehicles.

In a videotaped interview broadcast the evening of his death by Vice News, Reinoehl came close to admitting he shot Aaron “Jay” Danielson, a supporter of a right-wing group, on Aug. 29 after a caravan of President Donald Trump backers drove their pickup trucks through downtown Portland.

Reinoehl said he “had no choice” but to do what he did because he thought he and a friend were about to be stabbed.

“I hate to say it, but I see a civil war right around the corner,” Reinoehl, with a partially covered tattoo of a raised fist on the right side of his neck, said in the interview.

He told Vice News he was an anti-fascist but was not a member of antifa, an umbrella description for far-left-leaning militant groups that resist neo-Nazis and white supremacists at demonstrations and other events.

It was not immediately clear where Reinoehl hid out in the five days that elapsed since shooting in Portland.

Brady said the “suspect” who was killed — he declined to name him as Reinoehl — left an apartment shortly around 7 p.m. Thursday, got into a vehicle, and was confronted by the task force members. They fired into the vehicle, Reinoehl got out and ran and was shot, Brady said.

Federal agents from the FBI and the U.S. Marshals Service had located Reinoehl on Thursday after a warrant was issued for his arrest and Reinoehl pulled a gun during the encounter, a senior Justice Department official in Washington said. The official wasn't authorized to discuss the matter publicly and spoke to the AP on condition of anonymity.

"Initial reports indicate the suspect produced a firearm, threatening the lives of law enforcement officers. Task force members responded to the threat and struck the suspect who was pronounced dead at the scene,” the statement said.

U.S. Marshals Service fugitive task forces — comprised of deputy marshals, other federal agents and local law enforcement officers from a variety of agencies — are responsible for apprehending violent felons and other wanted suspects.

Brady said the four task force members who fired their weapons were two Pierce County Sheriff’s deputies, a police officer from the Washington city of Lakewood and Washington State Department of Corrections officer.

Brady said investigators haven’t yet determined how many rounds were fired but witnesses Chad Smith and Chase Cutler, who were working on cars nearby, told The News Tribune they saw two SUVs converge on a man in a vehicle at the apartment complex. They said they heard 40 to 50 shots, the Tacoma, Washington, newspaper reported.

Brady said he doesn’t think the suspect lived at the address where he was shot, and that it was not clear what brought him to Lacey, on the outskirts of Olympia, the state capital.

Barr called the tracking down of Reinoehl "a significant accomplishment in the ongoing effort to restore law and order to Portland and other cities.” Trump in his re-election campaign has embraced a law-and-order theme.

Records show that police in Portland cited Reinoehl on July 5 on allegations of possessing a loaded gun in a public place, resisting arrest and interfering with police.

On July 26, Reinoehl was shot near his elbow after he got involved in a scuffle in the city between an armed white man and a group of young people of color.

Reinoehl also was wanted on an eastern Oregon warrant, where court records show he skipped a hearing related to a June case in which he was charged with driving under the influence of controlled substances, reckless driving, reckless endangerment and unlawful possession of a firearm.

Police said he drove on an interstate at up to 111 mph (179 kph), with his daughter in the car, while racing his 17-year-old son, who was in a different vehicle.

With unruly demonstrations in Portland nearing the 100-day mark this weekend, Oregon Gov. Kate Brown and other Democratic leaders on Thursday called for an end to violence, even as federal agents were continuing to arrest protesters who allegedly assaulted law enforcement officers.

“The violence must stop,” Brown wrote. “There is no place for white supremacy or vigilantism in Oregon. All who perpetrate violent crimes must be held equally accountable.”

Brown’s condemnation of violence was also signed by almost two-dozen state and local politicians, a host of organizations including the local NAACP chapter, and the city’s professional sports teams: the Trailblazers NBA team, the Timbers soccer team and the Thorns women’s soccer squad.

A vehicle drove through the protest, “narrowly missing people in the group,” a police statement said. The driver was later stopped and cited; police additionally arrested two protesters. Support vehicles that police said were used to block traffic were cited and one was towed.