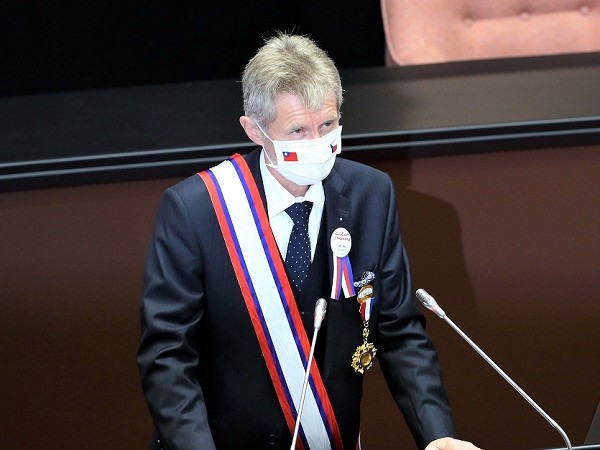 Czech Senate President Miloš Vystrčil has admitted he felt "scared" by the threats from Chinese Foreign Minister Wang Yi (王毅) over his Taiwan trip but stressed that courage is about "overcoming fears."

"Yes, naturally, I am afraid and I do have some concerns. But courage is not about not having fear and concerns," Vystrčil told CNA in an exclusive interview Friday. "Courage is about overcoming these fears and concerns." He was responding to questions from CNA about the threat made by Chinese Foreign Minister Wang Yi (王毅) in Germany on Aug. 31 that Vystrčil will pay a "heavy price" for visiting Taiwan.

Saying that Wang's warning was not a pleasant one, Vystrčil reiterated that his visit to Taiwan was not meant as taking a stance against China.
"After all, Taiwan and the People's Republic of China, they have really tight economic connections," he said. Vystrčil, the second highest ranking official in the Czech Republic, said he was not against the Czech Republic doing business with China on an equal basis, but what was not acceptable was "any subordination to or dependency on" China.

Asked whether he was confident that his visit to Taiwan will change the perceptions of governments in Europe and that of the Czech government toward Taiwan and China, Vystrčil said that was not the main goal of the visit. But Vystrčil acknowledged that "it might be the case," judging from reactions in Germany and France.

On Monday, Czech Foreign Minister Tomáš Petříček tweeted that Wang's comments were "over the edge" and "do not belong in the relations between the two sovereign countries."

French Foreign Ministry spokesperson Agnes von der Muhll on Sept. 1 said Europe-China relations should be based on mutual respect and threats targeted at any European Union member state were unacceptable. German Foreign Minister Heiko Maas said the same day that threats have no place in Europe.