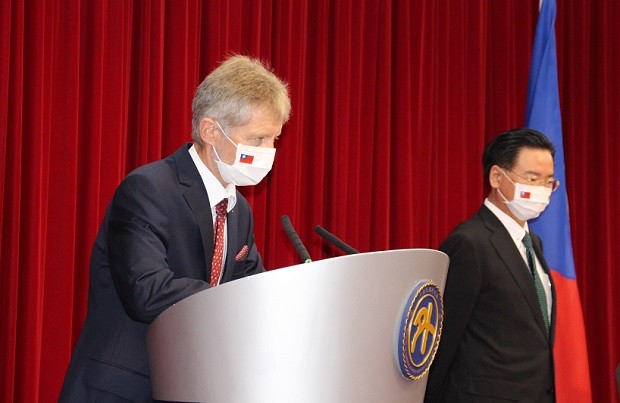 TAIPEI (Taiwan News) — Czech Senate President Milos Vystrcil, who is leading an 89-member delegation of Czech political, business, and cultural leaders to Taiwan, on Thursday (Sept. 3) said the group had largely achieved its goals of securing economic and business partnerships, educational exchanges, and solidarity with a fellow democracy.

Vystrcil, who is the second-most powerful politician in the Central European country, spoke at a press conference at the Ministry of Foreign Affairs. Legislative Yuan President You Si-kun (游錫堃), Minister of Foreign Affairs Joseph Wu (吳釗燮), and the head of the Czech-Taiwanese Business Chamber, Pavel Divis, also delivered their views on the progress made over the week.

Speaking first, You pointed out that Vystrcil had come at his invitation. He contrasted the Vystrcil speech at the legislature on Tuesday (Sept. 1), which was "like spring sunshine touching the hearts of the Taiwanese people," with Chinese Foreign Minister Wang Yi's recent threatening remarks about the Czech leader, which You said, "were like the cold winter winds."

The Chinese diplomat on Monday (Aug. 31) said Vystrcil had "crossed a red line" and warned that those who flout the "one China policy" will "pay a heavy price." His words drew criticism from several European countries, including France and Germany, to whom the comment crossed a line in diplomatic etiquette.

"In international society, you cannot win respect through bullying — only democracy and freedom can," You said. Closing he expressed hope that other countries would follow Vystrcil's support of the country and hinted at his own trip to Prague in the near future. Foreign Minister Wu in his remarks said that the Czech group's visit had resulted in "more than 20 tangible results in just a few days." One of these is a new direct flight from Prague to its sister city of Taipei to be operated by Taiwanese carrier China Airlines once the pandemic winds down.

Regarding partnerships in education, he mentioned that three Taiwanese colleges had signed memoranda of understanding (MOU) with the University of Chemistry and Technology, Prague. In addition, the Taiwanese government has agreed to offer 50 Czech students Huayu enrichment scholarships to study Mandarin in the country.

In the cultural arena, the Prague Philharmonia now plans to perform in Taiwan sometime in the next year.

Wu said the "multi-level, multi-channel" cooperation proves that the countries' bilateral relations had matured into a "comprehensive partnership." He reiterated Vystrcil's statement that the trip had been undertaken to carry on former Czech President Havel's tradition of "working with other democracies regardless of opposition in order to safeguard the values of liberty and democracy."

Expressing gratitude for the many messages of support he has received for the Taiwan trip, Vystrcil said he believed the delegation had for the most part met its goals. He then proceeded to summarize what the group had accomplished during their time in Taiwan. On the economic front, he announced plans for a parliamentary working group, led by Foreign Affairs Committee Chairman Pavel Fischer and two other senators, to handle potential Taiwanese direct investment as well as security. There is also the possibility of a working group tasked with cooperating with the East Asian partner on healthcare, which he noted is also a security matter — particularly during the coronavirus pandemic.

On capital and direct investment from Taiwan, the Senate speaker said the Czech Republic would focus on high-value-added industries. He predicted that between its scientific capabilities and Taiwan's high-tech know-how, such a collaboration would reap dividends for both sides.

He mentioned that one of the final meetings left for delegation members before they return home on Friday (Sept. 4) is with a Taiwanese bank interested in facilitating investment in the Central European nation.

As for education, Vystrcil touted what he called a longstanding tradition of Czech-Taiwanese exchanges in science and academia. He said relevant members of the delegation would try to convince the Czech education ministry to commit to ramping up the exchange of high school students as well as instructors.

Vystrcil said the third major mission of the trip — reinforcing the relationship between two democracies — had been accomplished as well, and he welcomed his Taiwanese counterpart You to make a visit to the Czech Parliament. He remarked that while there is not enough political support in Czechia to make it an official visit, this would not prevent them from working together. The Senate president closed by saying, "We truly found real friends here." Recalling an old saying, he added: "There was a will, and we found the way."

Czech-Taiwanese Business Chamber President Pavel Divis, commented in his statement on the flurry of meetings that have taken place since the delegation arrived on Sunday (Aug. 30), counting "122 hours and 5 minutes in your beautiful country" and the exchange of nearly 1,000 business cards.

Divis, who is leading the business side of the delegation, said the group had visited a number of businesses and industries, such as the Industrial Technology Research Institute (ITRI) and that they were tired but pleased to be leaving with "tangible results."