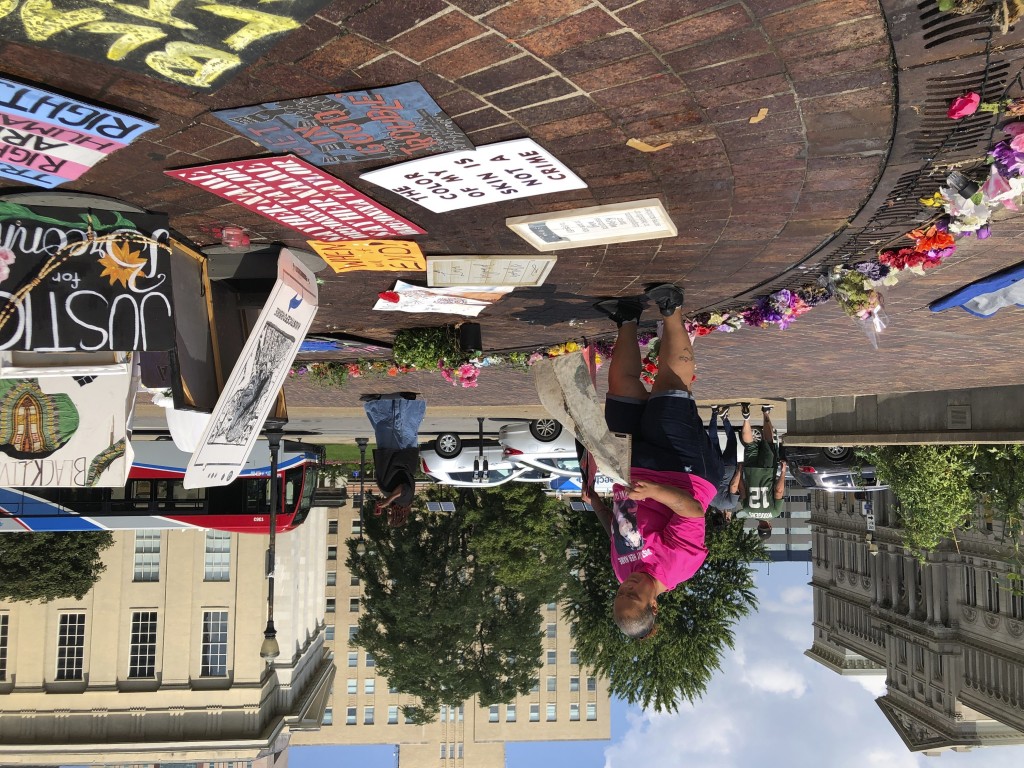 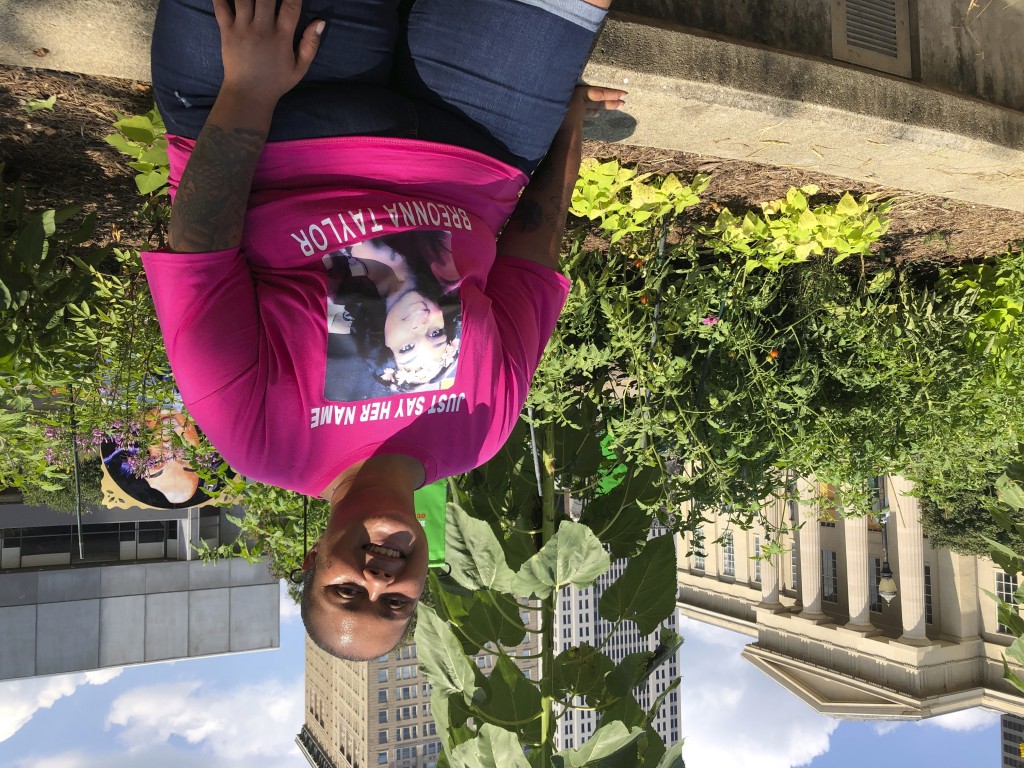 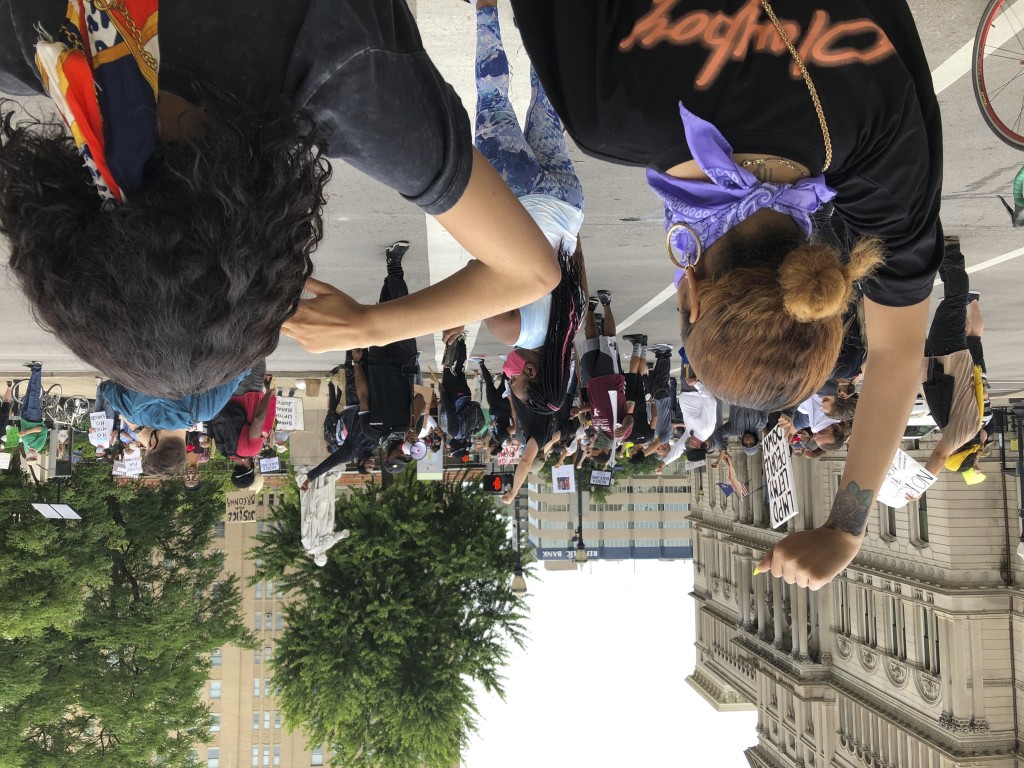 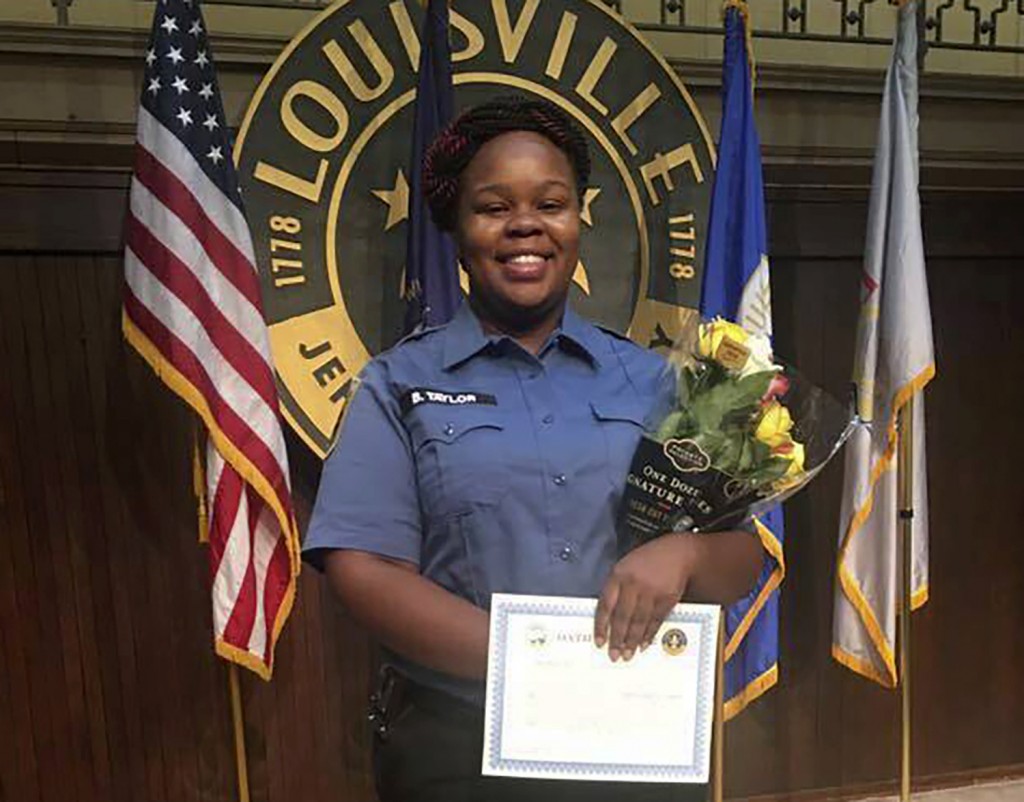 LOUISVILLE, Ky. (AP) — Amber Brown had climbed into a city bus before dawn, had driven her eight-hour shift, and she was tired. But she knew she couldn’t go home.

Instead she headed down to “Injustice Square” -- a single city block that was until a few months ago an unremarkable Louisville park. Now it is the nucleus of the nation’s rage over the police killing of 26-year-old Breonna Taylor, an emergency medical technician shot dead when police burst into her home in the middle of the night.

“This is where I’ve got to be,” said Brown, part of a group that has kept vigil here every day for three months. “This is my moment, this is my space.”

They were here in this square before Oprah erected billboards all over town, before Taylor graced the cover of Vanity Fair magazine, before her name was proclaimed by the most famous celebrities and athletes and politicians in the world.

They arrived months ago to join the tens of thousands who took to the streets across the country to demand justice for Taylor and George Floyd, whose death under the knee of a Minneapolis police officer was captured on video and shocked the world. They were strangers to each other then, faces in a sea of humanity, unaware that their devotion to this square would soon tether them together.

The crowds dwindled, until about 50 people were coming to this park day after day: bus drivers, pastors, grocery store workers, retirees. Together, they have been tear-gassed and sprayed with pepper bullets by police in riot gear. They witnessed a killing. They’ve received death threats.

Some jolt out of bed with nightmares. Brown rarely takes the pistol off her hip. Still they show up each day because they say this movement has given them a sense of community and purpose greater than any they’ve known before.

Brown set up a table with snacks and hand sanitizer. She said hello to the man who showed up one day, started cleaning up trash and has swept the park every day since. And to the women tending to the tomato plants and watermelons they’re growing in a circle around the memorial to Taylor. She chatted with volunteer security about the right-wing militia gathering a couple miles away carrying AR-15s -- an occurrence so common now that it doesn't draw much alarm.

Brown never expected to become a central figure in a protest movement; she had thought she would drive a bus for 30 years, keep her head down and retire happily, with a pension. Now some call her the “park mom,” because she tries to solve people’s problems and scolds them when they step out of line.

Her primary rules: no spray-painting, fighting, breaking windows or any kind of troublemaking around this square. Any of that could draw police, the last people she wants here.

The protests in Louisville, as in many cities, included flashes of violence for several days when they began in late May. But for the three months since, it has been a mostly peaceful occupation with occasional flare-ups of lawlessness; there was the time a few weeks ago when marchers went to an entertainment strip, flipped tables over and set trash cans on fire.

However peaceful they’ve been, protesters have been arrested by the dozens, mostly for blocking roadways or refusing to leave when police ordered them away.

For blocks in every direction, windows are boarded up, and some see Brown and her fellow demonstrators as agitators destroying downtown. Brown said she sees power in the fear those boards represent: The protesters can upend the heart of a city until they get what they want -- and what she wants is bigger now than when they started.

It began with a demand that the police officers who killed Taylor be prosecuted. Had that been met quickly they would have probably gone home, Brown said. But months later, the investigation into the incident continues, no charges have been filed, and so here they are.

The rage that fueled the first days morphed into purpose, she said, and now justice for Taylor alone will no longer be enough to convince them to leave. They want to dismantle the policing system that has left so many Black people dead -- and funnel much of the policing budget into what they see as more constructive crime prevention, such as addiction treatment, mental health care and housing.

“The system is broken,” Brown said. “It’s like you keep trying to fix an engine that keeps blowing up. How many times is it going to catch fire before you’re just like, ‘you know what, maybe we just need a whole new car.’”

She believes the evolution of life in this square shows that is possible. The die-hards have settled into roles -- gardeners, janitors, security -- and hers is social work. She and others here connect people to housing and health care, sort through clothing donations, put out calls for food and water so everyone who passes through gets fed. That includes the city’s homeless population, many of whom have been drawn to the resources now suddenly available here.

Brown hasn’t seen her biological family in months. She has two nephews she adores, but she knows she’s risking exposing herself to coronavirus by being around so many people, so she stays away. The sacrifice is worth it, she said. Those nephews are Black children who will grow up to be Black men, and she wants the country to be safer for them.

“When I come out here, it’s like finding a whole new family,” she said. She calls Travis Nagdy her “new little brother.” The 21-year-old grew up cycling through foster homes and battled drug addiction until he detoxed in jail. In this square full of people who were strangers to him a few months ago, he feels a sense of family greater than ever before in his life.

He had been adrift, he said, until he realized he was good at things: leading chants, making up rhymes. People followed his lead.

Brown also spent part of her childhood in foster care. It left her closed off and guarded, she said, and she struggled to connect with most people on a deeper level.

“I didn’t have that sense of community and I really didn’t want it. I don’t know my neighbors. I don’t have a whole lot of people in my life that I consider to be close,” she said.

But something changed her here. She has gone through things with people that make the surface-level relationships she’s used to no longer possible.

On June 27, about a month into the protest, a man opened fire in the square. A photographer, 27-year-old Tyler Gerth, well-known and well-loved by the protesters, was shot and killed. The alleged gunman had been a regular at the park, but other protesters kicked him out for misbehavior and they’d worried he was mentally unstable. He came back and fired into the square.

Brown, not far from the shooter, threw her body on top of a fellow protester to shield them from the bullets.

Millicent Cahoon, a local therapist, put out a call to her network that day and a contingent of mental health counselors arrived at the square. Dozens of protesters have since sought help to deal with Gerth’s death, and all the other traumas of this occupation, which, especially in the beginning, routinely collided with an aggressive police response. People have described having nightmares and panic attacks, she said. They can’t focus, they dissociate from their family and friends, constantly recreating in their minds all they’ve seen.

Chris Will, a prominent local activist, said on the worst days, early on, tear gas canisters felt like they were raining on them. The air was so thick with gas, he couldn’t see right in front of him.

“I thought we were going to die,” he said. “You couldn’t see, you couldn’t breathe.”

He could barely sleep because of the dreams. He asked around the park, and everyone told him they felt it, too.

“I wanted to give up a whole lot of times,” said Rose Henderson, who everyone calls “Mama Rose.” “There’s days I come home crying. I’m tired, I’m worn out.”

Yet she said she feels called by God to come back every day, often from before noon until after midnight. Her job here is to tend to the growing memorial, she said, so that when the families of both Taylor and Gerth come by it will be pretty for them. She talked to the local artist who was working on a portrait of Taylor to stand as a centerpiece in the square.

“I told him to make it as big as he could, big and beautiful, to remind people why we’re here,” she said. Now that portrait stands nearly 8 feet tall, circled in gold and surrounded by paintings and posters others made for her. It had rained for days, so they had stacked them all up and covered them with a tarp.

But the sun was coming out, so Brown and others began unpacking them.

She set up a black-and-white painting of Taylor, and remarked how beautiful she looked in it.

Taylor, though absent, is part of this community, too. Brown tries not to spend much time thinking about the life she might have led. It’s just too overwhelming to contemplate.

“Why did she have to die?” she asked. “All of these problems existed before Breonna Taylor died. Why couldn’t she have been part of this movement alive? Instead of the name that we’re chanting.”