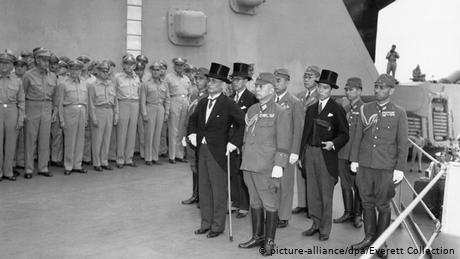 When exactly did World War II end in the Pacific? Russia now has a different answer to that question than the West.

In mid-April, Russia's parliament voted to move the day commemorating the end of World War II in Asia from September 2 to 3, arguing they wanted to do the few veterans still alive a favor. After the end of the war, they had been awarded medals engraved with the words "For the victory over Japan" and the date September 3.

In Asia, World War II ended 75 years ago with the capitulation of the Japanese Empire on August 15, 1945. On September 2, a document was formally signed aboard the USS Missouri. Moscow only entered the war against Japan on August 8, 1945 in a move that scrapped the 1941 Japanese-Soviet Neutrality Pact. At the Yalta Conference in February 1945, Josef Stalin had agreed the Soviet Union would join the Allies — the United States and Britain — in the war against Japan. About 1.5 million Red Army soldiers fought against Japanese troops in Manchuria in northeastern China. More than 12,000 Red Army soldiers died in a battle that lasted only a few days.

Read more: The Yalta Conference, where the postwar world began

It came as a "real shock" to Japan when the Soviets joined the war, Takuma Melber of the Heidelberg Center for Transcultural Studies told DW. The historian agreed with his US colleague Tsuyoshi Hasegawa that most likely the Soviet declaration of war was "ultimately more decisive for Japan's capitulation" than the two nuclear bombs the US dropped on Japan on August 6 and 9, 1945. By then, the Japanese military was "finished" anyway, and Russia, Melber said, simply sped up the surrender.

The consequences of the Soviet-Japanese war continue to shape relations between the two countries to this day. At the time, the Soviet Union expanded its territory in the Far East, to the southern part of Sakhalin Island and the Kuril Islands. Japan does not recognize four of the islands as Russian territory and would like to negotiate their return — to no avail. A peace treaty has yet to be signed.

Renunciation of the West, move towards China

During the Soviet era, memories of the Pacific War were overshadowed by the Great Patriotic War, the term Russia used for the fight against Nazi Germany. September 3, the day of victory over Japan, was added to the list of public holidays in 1945, but it was removed again in 1947 and forgotten.

In the mid-1990s, September 2 was officially listed as the end of the Second World War in a law on Russian memorial days. At that time, Russia formally held the same view as the West. Russia was in fact very pro-Western back then. That has long since changed. Under President Vladimir Putin, the Stalin cult has experienced a new heyday. "This is about a further dismantling of the symbolic legacy of the 1990s," says DW columnist Konstantin Eggert.

On the one hand, moving the date back is "a demonstration of power and a pointer for Tokyo concerning the dispute over the Kuril Islands and the question of dominance in the Asia-Pacific region," said Takuma Melber. On the other hand, Putin deliberately brings into play a Stalinist tradition of remembrance by commemorating and celebrating the victory on September 3, he added. The move can also be interpreted as Russia turning its back on the West, above all the US, and moving closer to China, which also celebrates the end of the war on September 3. According to Melber, Russia now to a certain degree "matches China in terms of memory policy and symbolism."

Russia's history policy under Putin may be one of the reasons for Moscow's decision. Second World War remembrance has been turned into a key factor to shape identity. Victory Day on May 9 is considered the most important national holiday.

The new date has been criticized because it stands for another event in recent Russian history, the Beslan school hostage crisis. On September 1, 2004, Chechen rebels took hostage an entire school in Beslan, a city in the Russian constituent Republic of North Ossetia-Alania. More than 330 people, most of them children, died in an attempted rescue operation on September 3. Since then, Russia has celebrated solidarity in the fight against terrorism on this date and commemorated the victims.

The Mothers of Beslan nongovernmental organization has appealed to Putin to refrain from the change, arguing the conflict between a joyful and a sad event is obvious. The North Ossetia authorities said they fully understood people celebrating in other regions but did not want to participate and would prefer to keep alive the memory of the Beslan victims. Even the Russian president's Human Rights Council urged rethinking moving the the Second World War commemoration to the day of the Beslan tragedy. The appeals went unheard.