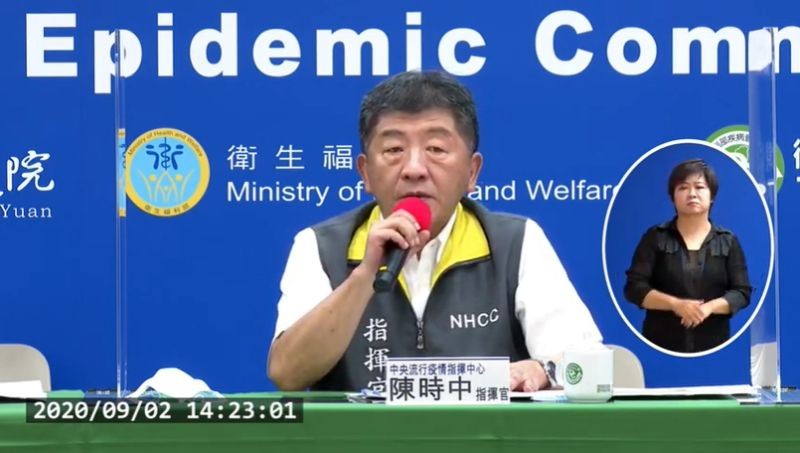 During his weekly press conference on Wednesday, Health Minister and CECC head Chen Shih-chung (陳時中) announced that one new coronavirus case had been imported from Indonesia, bringing the total number of cases in Taiwan to 489. No. 489 is an Indonesian crew member of a ship in his 40s.

When the man first arrived in Taiwan on Aug. 16, he began 14 days of quarantine. As he was scheduled to leave Taiwan on Sept. 2 for work reasons, he paid for an additional test, which came back positive.

The CECC said that case No. 489 tested negative for the disease three days before he was due to board a flight. Thus far, the man has not exhibited any symptoms of the disease.

After re-entering Taiwan on Aug. 16, the man was transported directly to a hotel to undergo a two-week quarantine. As he was originally scheduled to leave the country on Sept. 2, he arranged to take an epidemic prevention taxi to the hospital for an additional test at his own expense on Aug. 31.

His cycle threshold (Ct) value was 34, while his Immunoglobulin M (IgM) and Immunoglobulin G (IgG) antibody tests were all positive. He was confirmed to have the disease on Sept. 2 and is undergoing treatment in a hospital isolation ward.

The health department has identified a total of 35 persons who came in contact with the man in Taiwan, two of whom are drivers of epidemic prevention taxis. The remaining 33 are people who took the same taxis and have been told to begin home isolation.

The CECC on Wednesday did not announce any new reports of people with suspected symptoms. Since the outbreak began, Taiwan has carried out 87,646 COVID-19 tests, with 86,602 coming back negative.

Out of the 489 confirmed cases, 397 were imported, 55 were local, 36 came from the Navy's "Goodwill Fleet," and one was the undetermined case of a Belgian engineer who arrived in early May to work on a wind farm project in Changhua County. Up until now, seven individuals have succumbed to the disease, while 471 have been released from hospital isolation, leaving 11 patients still undergoing treatment in Taiwan.