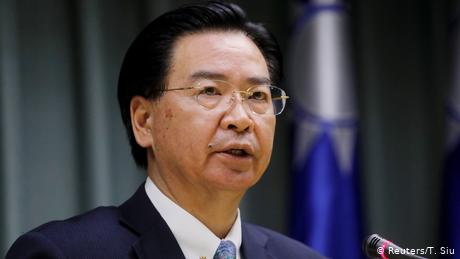 Two high-level diplomatic visits between Taiwan and allied democracies come as China is ratcheting up military pressure on the self-ruled island. Now Taipei is looking to its informal network of international allies for support.

Two weeks ago, the United States sent its highest-level delegation to Taiwan since Washington broke off formal diplomatic ties with the island in 1979. On Tuesday, a delegation from the Czech Republic visited Taiwan, which is seen in Taipei as a positive signal of stronger ties with the European Union.

"The exchanges between Taiwan and European countries have been getting deeper, and we cover a wider spectrum of issues, including human rights and even security issues," Taiwan Foreign Minister Joseph Wu told DW, adding that the Czech delegation's visit would "set a very good example to other countries in Europe that they can do the same."

"Whatever they will do to improve relations with Taiwan, be it cultural, economic or political exchanges, they will all be welcomed by Taiwan," said Wu.

However, direct diplomatic engagement by western countries is seen as an affront in Beijing, as China's Communist Party leadership considers Taiwan to be a renegade province that should be reunited with mainland China.

Wang described the Czech visit as a "provocation" and reiterated Beijing's stance that Taiwan is an inseparable part of China.

Amid this series of high-level foreign visits to Taiwan, China has been increasing its military bluster towards the island over the last few weeks.

The growing military movement around Taiwan has raised concerns that the island could get caught up in a regional strategic rivalry between Washington and Beijing.

Joseph Wu told DW that Beijing has being threatening military force against Taiwan for decades, and Taiwan has always taken the threat seriously.

"We have been under threat for decades, and we watch out for Chinese military action against Taiwan," Wu said. "Our military has also tried to prepare for a possible conflict."

However, Wu warned that military conflict between Taiwan and China is in no one's interest, as it would destroy the cross-Strait status quo that has maintained long-term peace and stability.

"If China destroys the status quo, I'm sure it would not be in the interest of everyone who has a stake in the peace and stability across the Taiwan Strait."

To increase its defense capabilities, Taiwan is modernizing its weaponry and reassessing military strategies, according to Wu.

In the latest sign of Washington's military support, Taiwan opened a maintenance center for its fleet of upgraded American F-16 fighter jets on August 28. This comes after the US approved an $8 billion (€6.68 billion) sale of F-16 fighter jets to Taiwan, increasing its fleet to more than 200.

"It takes solid defense capability, not bowing and cringing, to defend the sovereignty of the Republic of China [Taiwan] and maintain regional peace and stability," said President Tsai Ing-Wen on August 28.

Since the Chinese government imposed a national security law on Hong Kong in July, an increasing number of Hong Kongers have fled to Taiwan.

More than 200 Hong Kong protesters have sought refuge in Taiwan since 2019, and last week, 12 activists were caught by Chinese coast guards as they tried to flee to the island by boat.

Joseph Wu reiterated Taiwan's support for Hong Kongers, describing the situation in the semi-autonomous Chinese territory as a "tragedy."

"As long as they can reach Taiwan, we will try to provide them with safety," Wu said.

"If they want to move on to other countries, we would also try to speak with other countries in providing them with necessary help. But at this moment, we are doing whatever we can to help the Hong Kongers who are willing to come to Taiwan."

Taiwan is also renewing calls to be included as a member of the United Nations, a move which is bitterly opposed by Beijing.

"We understand that this is a long shot, but Taiwan is determined to be able to play a role in international organizations, whether it's in the UN or in the WHO," said Wu.

"We are just making donations, and we are not asking for political conditions. We just want to help."

Read more: How has Taiwan kept its coronavirus infection rate so low?

Wu is also aware of the likelihood that China will mobilize its allies to block any discussion about Taiwan's inclusion to the UN.

Rather than protest against Beijing's efforts to marginalize Taiwan, Wu thinks it's more important to let the international community understand that Taiwan is not part of China.

"Taiwan is just Taiwan, and it is a democracy that is envied by many countries in the world," Wu said.

"Taiwanese people have the same rights as citizens from other countries. I would ask members of the international organizations to look at Taiwan's role as a positive one, and to consider including Taiwan."