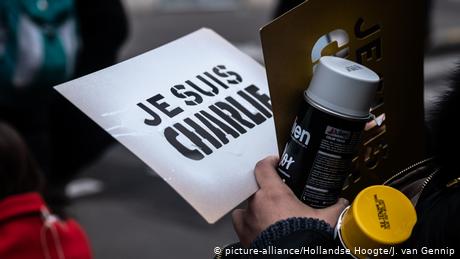 The French satirical magazine Charlie Hebdo said Tuesday it would republish controversial cartoons of the Muslim Prophet Mohammed to mark the beginning of a highly-anticipated trial stemming from the massacre committed at its Paris offices in 2015.

"We will never live down. We will never give up," Charlie Hebdo director Laurent "Riss" Sourisseau wrote in the latest edition of the magazine.

On Wednesday, a Paris court will open the trial of 13 men and a woman accused of providing the assailants with material and logistical support in the run-up to the attack. The edition with the Prophet Mohammed cartoons is also due to go on sale on Wednesday.

Waiting for the right moment

The cartoons were originally published in 2005 by Danish newspaper Jyllands-Posten. They were reprinted a year later by the French satirical publication, triggering widespread anger in the Muslim world.

Read more: Charlie Hebdo and the demise of caricature

"We have often been asked since January 2015 to print other caricatures of Mohammed," said a Charlie Hebdo editorial published in this week's edition.

"We have always refused to do so, not because it is prohibited — the law allows us to do so — but because there was a need for a good reason to do it, a reason which has meaning and which brings something to the debate."

Brothers Cherif and Said Kouachi claimed the attack in the name of al-Qaeda, describing it as vengeance for the publication of the controversial caricatures. Twelve people were killed in the initial attack, including some of France's most celebrated cartoonists. As the brothers left the offices, they cried out: "We have avenged the Prophet."

This week's front cover displayed several of the cartoons with the headline: "All of that, just for this."

In the wake of the 2015 attacks, Charlie Hebdo published an image of the Prophet Mohammed holding a placard that said "Je suis Charlie" — French for "I am Charlie" — beneath the headline: "Everything is forgiven."

"Rare are those who, five years later, dare oppose the demands that are still so pressing from religions in general, and some in particular," wrote Sourisseau in the latest publication.