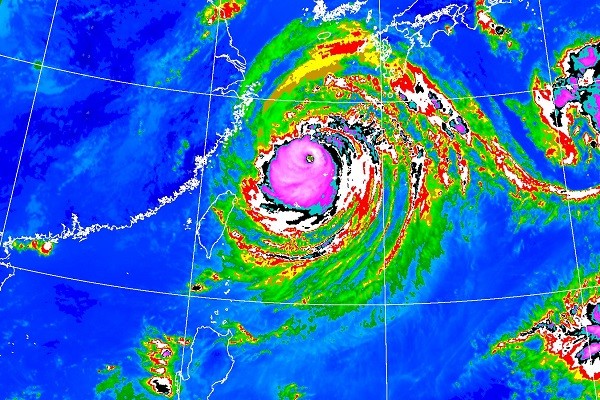 TAIPEI (Taiwan News) — Residents of northern Taiwan were warned today (Sept.1) by the Central Weather Bureau (CWB) to be advised of sudden downpours, flash floods, lightning strikes, and strong wind gusts as Typhoon Maysak (梅莎) delivers one final glancing blow as it plows north and away from the country.

As of 2 a.m. this morning, the center of Typhoon Maysak was 500 kilometers to the northeast of Taiwan moving north-northwest at a speed of 19 kilometers per hour (kph), according to the CWB. Maysak has a radius of 220 kilometers and is packing maximum sustained winds of 162 kph with gusts of up to 198 kph.

At 8:40 a.m., the CWB issued a heavy rain advisory covering Keelung City, Taipei City, New Taipei City, and Taoyuan City. The weather bureau said that Maysak's periphery will continue to affect northern and northeastern Taiwan with intermittent showers and possible heavy localized rainfall, while other areas will see cloudy skies with the possibility of brief thunderstorms in the afternoon.

As for temperatures, highs across Taiwan will range between 33 and 35 degrees Celsius. Eastern Taiwan and Kinmen could see the mercury climb above 36 degrees.

In addition, strong wind gusts and large waves are possible on the north coast of Keelung, eastern Taiwan (including Green Island and Orchid Island), coastal areas of the Hengchun Peninsula, and Matsu. People visiting coastal areas or going to sea for work or recreation are advised to take precautions for sudden gusts and waves.

The CWB predicts that rainfall will diminish in the afternoon as Typhoon Maysak shifts north. However, a new tropical depression, which has formed to the southeast of Japan, could intensify into the 10th tropical storm of the year today.

It is predicted that the storm could impact Japan's main island by Sunday (Sept. 6), but it is not currently expected to affect Taiwan directly.