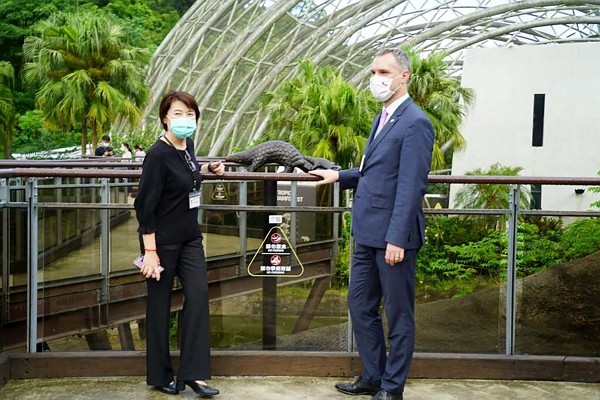 The Taipei Zoo will send two pangolins as gifts to the Prague Zoo as part of an animal exchange agreement between the two cities, which forged sisterhood ties earlier this year, a spokesman for the zoo said Monday (Aug. 31).

The zoo has chosen a female pangolin named Jun Hou Tang (潤喉糖) and a male named Kuo Pao (果寶) from among its 10-plus pangolins to send to the Prague Zoo in the near future after animal quarantine issues are resolved, said Taipei Zoo spokesperson Eric Tsao (曹先紹).

Once it receives the animals, the zoo in the Czech Republic's capital city will be the second in Europe to have pangolins from the Taipei Zoo, according to Tsao. The first was the Leipzig Zoo in Germany.

Pangolins are considered hard to breed, but the Taipei Zoo hasextensive experience with the animals, he said.

The animal exchange agreement was signed between the sister cities last year, and as part of the deal, Taipei Zoo is also planning to send a certain number of Przewalski's Horses to the zoo in Prague, he said.

Tsao talked about the exchange after Prague Mayor Zdenek Hřib got a one-hour private tour of the zoo on Monday afternoon and saw the two pangolins that will be sent to the Czech capital.

According to the zoo, Mayor Hřib had previously told Taipei Mayor Ko Wen-je (柯文哲) during the latter's visit to Prague last year that he saw some photographs of pangolins when he was a child and fell in love with the animal.

Taipei and Prague signed a sisterhood pact in January 2020.

Hřib is visiting Taiwan as part of an 89-member delegation led by Czech Senate President Miloš Vystrčil. It arrived Sunday and will stay in Taiwan until Sept. 4.

Meanwhile, another member of the Czech delegation, Rector Pavel Matějka of the University of Chemistry and Technology (UCT) in Prague, signed an agreement on academic cooperation Monday with Wang Sea-fue (王錫福), president of National Taipei University of Technology (NTUT).

The deal is expected to facilitate academic and student exchanges between the two universities, according to NTUT.

UCT is the second university in the Czech Republic with which the university has signed a cooperation agreement.

It previously signed a similar deal with Czech Technical University in Prague (CTU) in 2007.