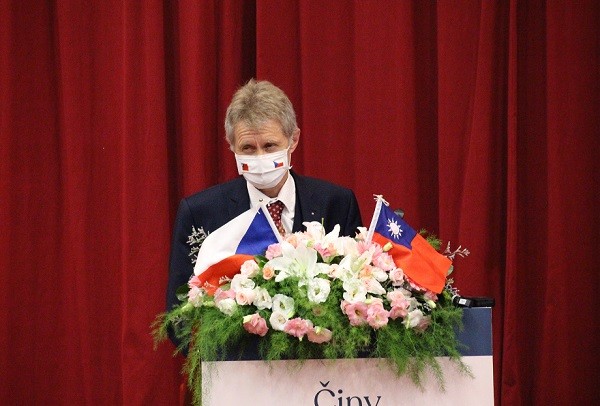 TAIPEI (Taiwan News) — The president of the Czech Senate on Monday (Aug. 31) gave a speech at one of Taiwan’s top universities in which he highlighted what he views as important values shared by Taiwan and the Czech Republic as well as historical parallels in the development of the countries' democracies.

At 2 p.m. on Monday, the second day of the 89-person Czech delegation’s Taiwan visit, Czech Senate leader Milos Vystrcil was invited to Taipei’s National Chengchi University (NCCU) to give a speech on Taiwan-Czech ties. The event included members of Taiwan’s Ministry of Foreign Affairs, Czech politicians accompanying the legislator on his trip, several Taiwanese students, and Czech and local media.

Vystrcil took the podium after welcome speeches by NCCU President Kuo Ming-cheng (郭明政) and Minister of Foreign Affairs Joseph Wu (吳釗燮), who both spoke on their feelings of kinship with the central European country as a fellow democracy that emerged from a not-so-distant authoritarian past. The Senate president pointed out that the Czech administration had advised against making the trip, which Beijing says violates its "one China policy." Remarking on Taiwan's election in January, he said he was glad the Taiwanese people had re-elected a president who collaborates with other democratic countries, paving the way for his visit; he added that protecting democracy requires courage, and pain is part of the process.

Vystrcil also stressed the similarities of each country on the eve of democracy, noting that it was students who were the driving force in both the Czech Republic's Velvet Revolution of 1989 and Taiwan's Wild Lily movement the following year. Since then, he said, Taiwan and the Czech Republic have demonstrated the importance they place on democracy and freedom, calling this their biggest advantage. The politician also said the Czech public had taken note of Taiwan's successes against the coronavirus pandemic. He also spoke of the natural beauty of Taiwan, quipping that the Portuguese had got it right when they dubbed it "Isla Formosa."

As he concluded his remarks, Vystrcil emphasized his desire to see Taiwanese society continue along its current trajectory. Zdenek Hrib, mayor of Taipei's sister city of Prague, spoke with Taiwan News after the event, laying out his three primary goals for the visit.

First, he said he is meeting leaders of Taipei to come up with potential areas of technical collaboration, such as on smart city projects. Second, he stated he is involved in ongoing talks with Taiwanese carrier China Airlines on the possibility of a direct Prague-Taipei flight.

Lastly, he mentioned that he is looking into changes in supply chains "because a lot of people realize that it's not a good idea to be strategically dependent on Mainland China in the case of crises — like the coronavirus crisis for example."

The mayor has been a vocal critic of Beijing's behavior in the Czech capital, from its pressure last year to disinvite the Taiwanese representative from a meeting to its insistence that the sister city agreement with Beijing be altered to emphasize the "one China policy" — a move that resulted in Prague leaders severing ties with the Chinese city in favor of Taipei.