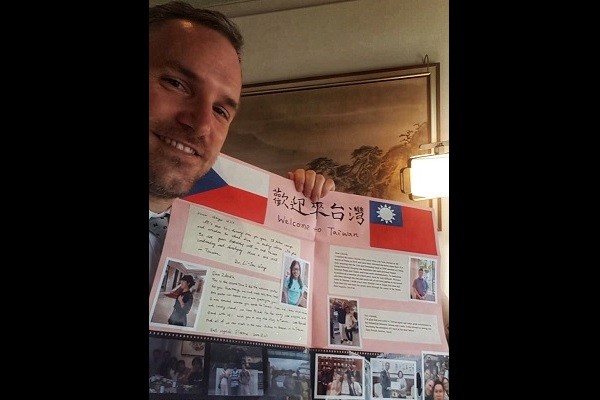 TAIPEI (Taiwan News) — As Czech Senate Speaker Milos Vystrcil leads a delegation of 89 participants to Taiwan, a photo by Prague Mayor Zdenek Hrib posing with a welcome card given him by former Taiwanese classmates has gone viral.

As part of Vystrcil's delegation, which arrived in Taiwan on Sunday (Aug. 30), the pro-Taiwan mayor Hrib is also visiting Taiwan for six days. After arriving in Taiwan that day, he wrote on Facebook that the next six days are fully booked with events.

He will not only meet with President Tsai Ing-wen (蔡英文), Premier Su Tseng-chang (蘇貞昌), and sister city Mayor Ko Wen-je (柯文哲) but also attend a Taiwan-Czech investment forum and a business matchmaking meeting. On Sunday evening, Hrib posted photos from his first day in Taipei, including he and Vystrcil posing with Ke Liang-ruey (柯良叡), the head of Taiwan's representative office in the Czech Republic, his meeting with Taiwan's Foreign Minister Joseph Wu (吳釗燮), and a greeting card gifted to him by his former classmates in Taiwan.

Hrib wrote that during the reception held by Wu, he received a card from his former classmates during a two-month Taiwan study abroad program he had taken part in 15 years ago. He said that each classmate wrote a message and included a photo of themselves which "made me happy."

He pointed out that in the next few days, he will join the delegation to participate in business matchmaking events such as the Taiwan Electronic Equipment Industry Association (TEEIA) and Taiwan-Czech investment forum, hoping that Prague can participate in Taiwan's production chain in the future. In addition, he will attend a symposium held at National Chengchi University and a reception held by the Czech community in Taiwan.

He also mentioned that he hoped that there would be direct flights between Prague and Taipei. Therefore, he would also hold talks with China Airlines (CAL) Chairman Hsieh Shih-chien (謝世謙), before meeting with Tsai and Su. Since Taipei and Prague are sister cities, he will also meet with Ko.

According to the Ministry of Economic Affairs, the Czech Republic is Taiwan's fourth-largest European investor, trailing only Germany, the Netherlands, and the United Kingdom. 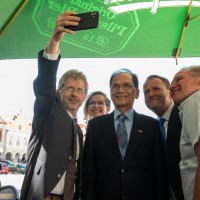 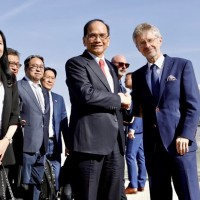 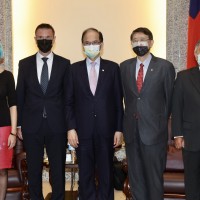 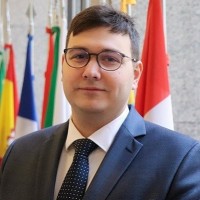