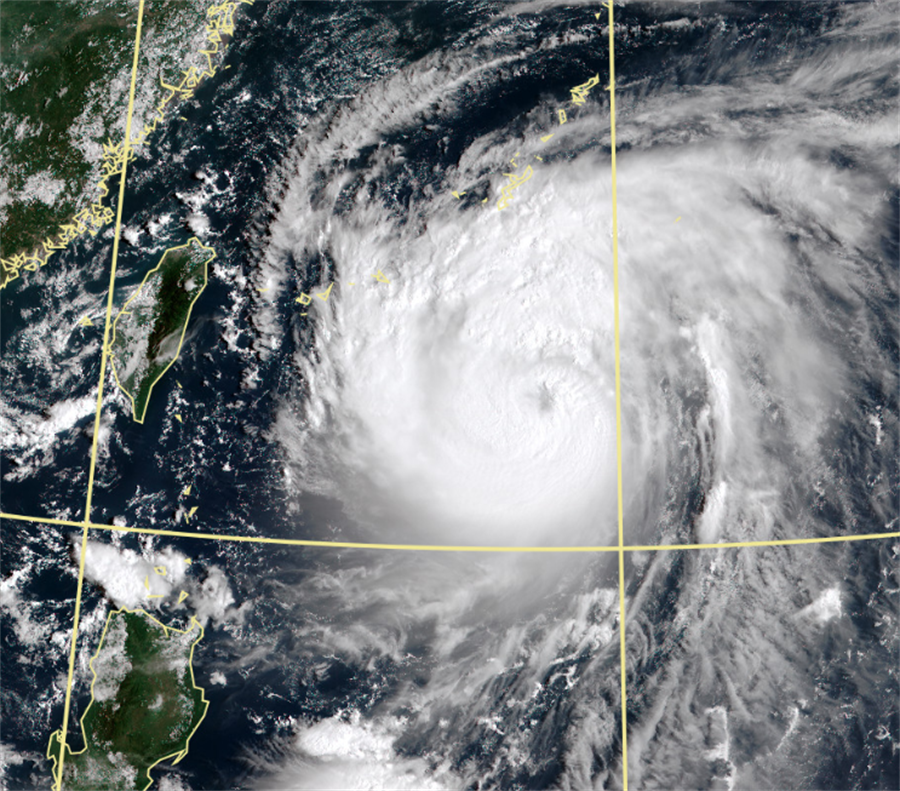 TAIPEI (Taiwan News) — Typhoon Maysak (梅莎) is predicted to come closest to Taiwan today (Aug. 31) and Tuesday (Sept. 1), with its periphery likely leading to rain and thunderstorms across much of Taiwan over the coming two days.

As of 2 a.m. this morning, Typhoon Maysak was located 870 kilometers east of Taiwan's southernmost tip of Eluanbi moving north-northwest at a speed of 31 kilometers per hour (kph), according to the CWB. Maysak has a radius of 80 kilometers and is packing maximum sustained winds of 162 kph with gusts of up to 198 kph.

CWB forecaster Liu Pei-teng (劉沛滕) predicts that the typhoon's periphery will bring sporadic rain to northern Taiwan and Yilan County as well as southern and central coastal areas. In addition, Liu said that thunderstorms are likely in the afternoon, especially in the central, southern, and eastern parts of the country. As for today's daytime highs, Liu said temperatures will range between 32 and 34 degrees Celsius. Liu said Taiwan will continue to be affected by the storm's periphery on Tuesday, seeing intermittent rainfall throughout the day.

Even after the typhoon leaves, Liu said that a relatively low-pressure zone will be left in its wake. By Wednesday (Sept. 2), Liu predicts that thunderstorms will likely return, while winds will shift from a southwesterly to an easterly or southeasterly direction.

Liu predicted that sporadic rainfall will continue to be likely along the coast on Wednesday. He advised the public to beware of large waves on the north coast of Keelung these two days and exercise extra caution when engaging in seaside activities in general over the next three days.

Typhoon Maysak will also bring strong gusts to Taiwan today and Tuesday. Beachgoers are advised to be on the alert for large waves on the north coast of Keelung, eastern Taiwan (including Green Island and Orchid Island), coastal areas of the Heng Chun Peninsula, and Matsu.

WeatherRisk Explore Inc. President Peng Chi-ming (彭啟明) predicts that Maysak will come closest to Taiwan from the second half of today to Tuesday morning, but because the center of the storm will probably not come nearer than 500 kilometers from the coast, a sea warning is unlikely. Models by the CWB and Joint Typhoon Warning Center (JTWC) put the typhoon at its closest today and slightly to the northeast of the country by Tuesday.

Due to the proximity of the storm's periphery, the CWB has issued a special report for strong winds at sea. The average wind force in the northern part of the Taiwan Strait could reach Level 6 on the Beaufort scale, with gusts climbing to Level 9.

The bureau predicts that on Tuesday, the average force of surface winds in northern Taiwan could range between Level 7 and 8, with maximum gusts rising to Level 10. However, as the storm starts to shift away from Taiwan, the average wind force could gradually weaken by Tuesday before ultimately heading due north towards the Korean Peninsula.