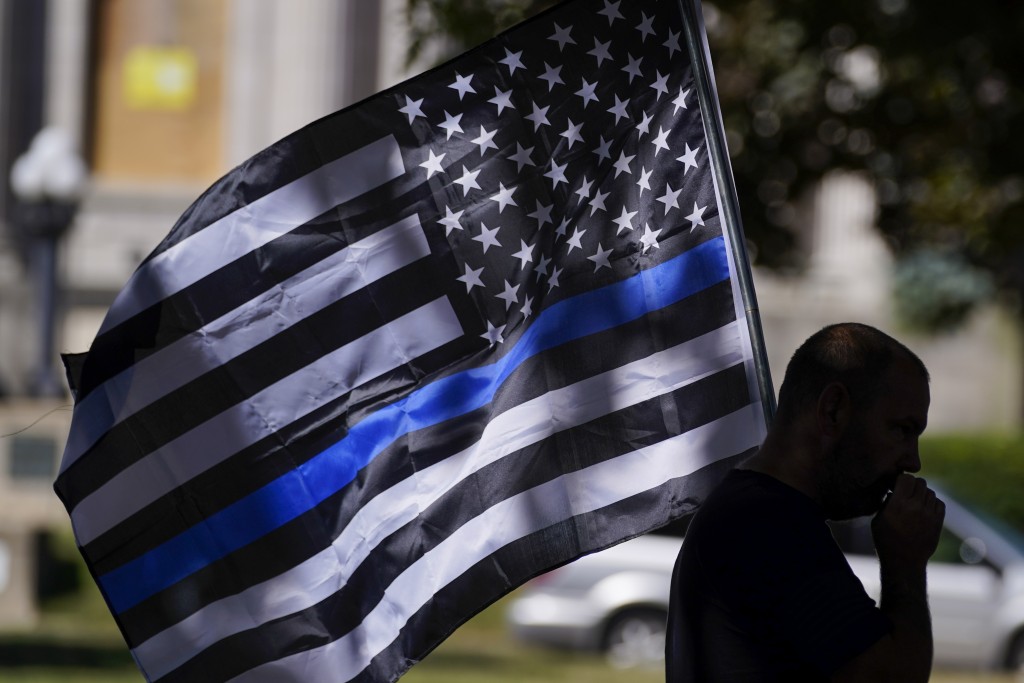 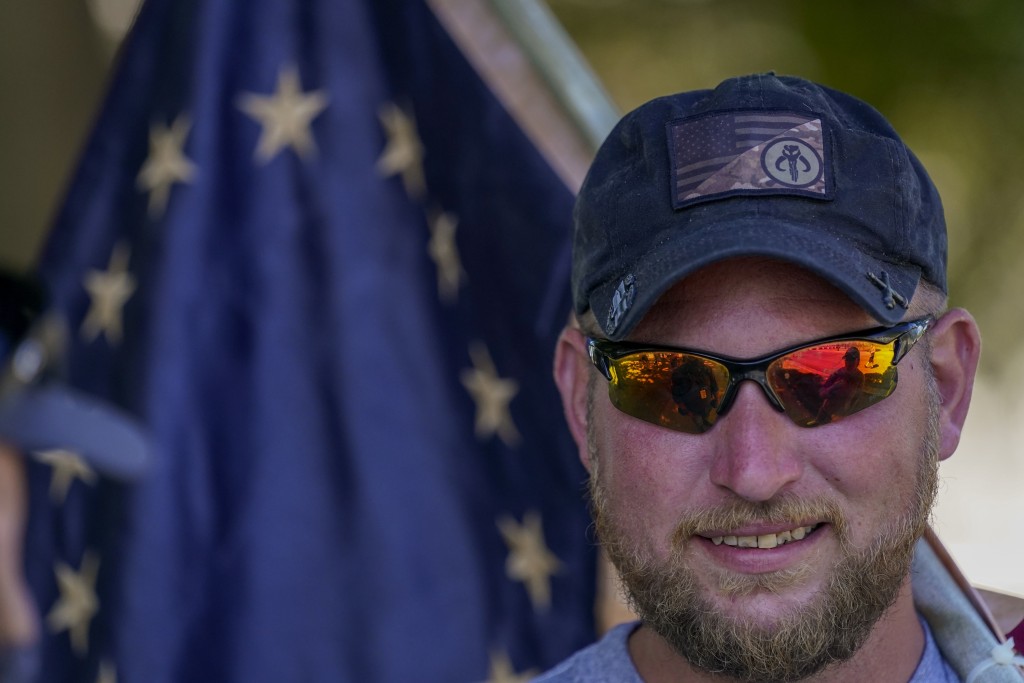 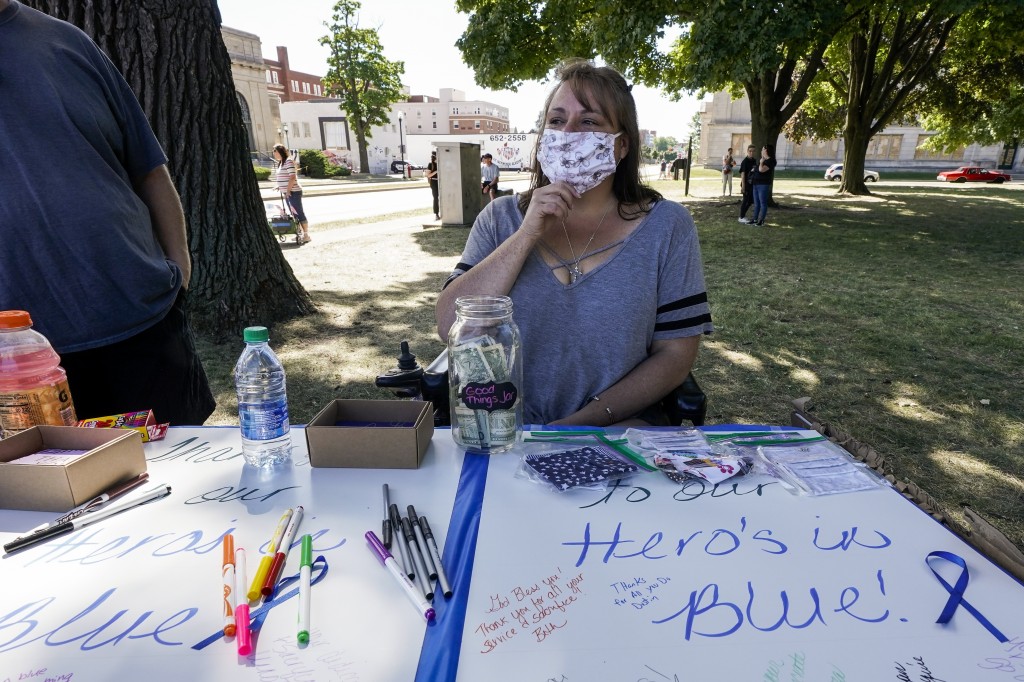 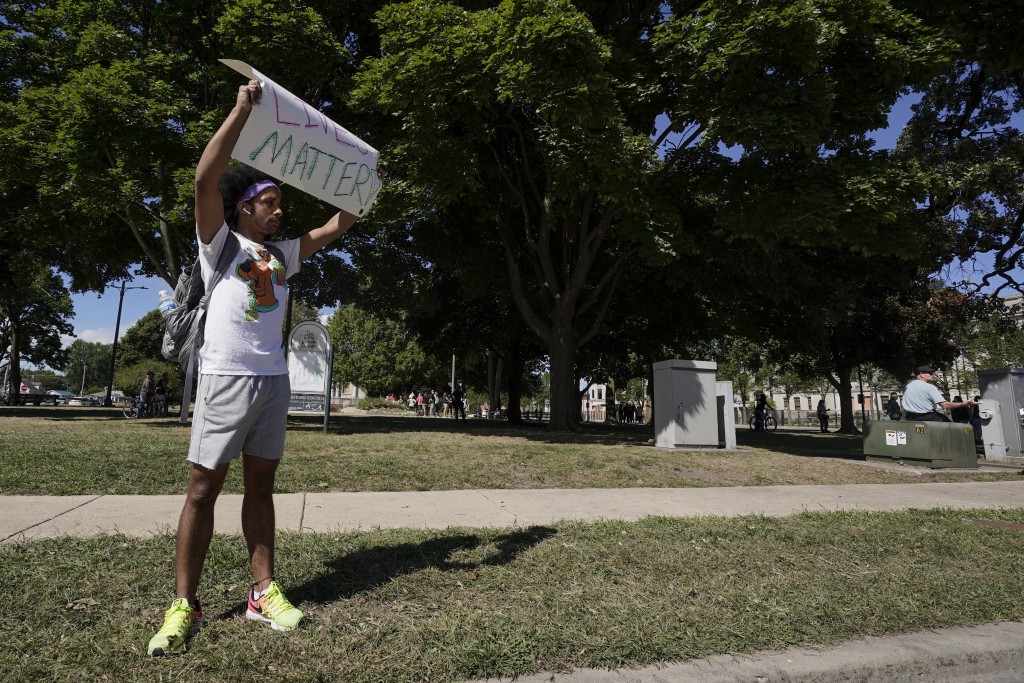 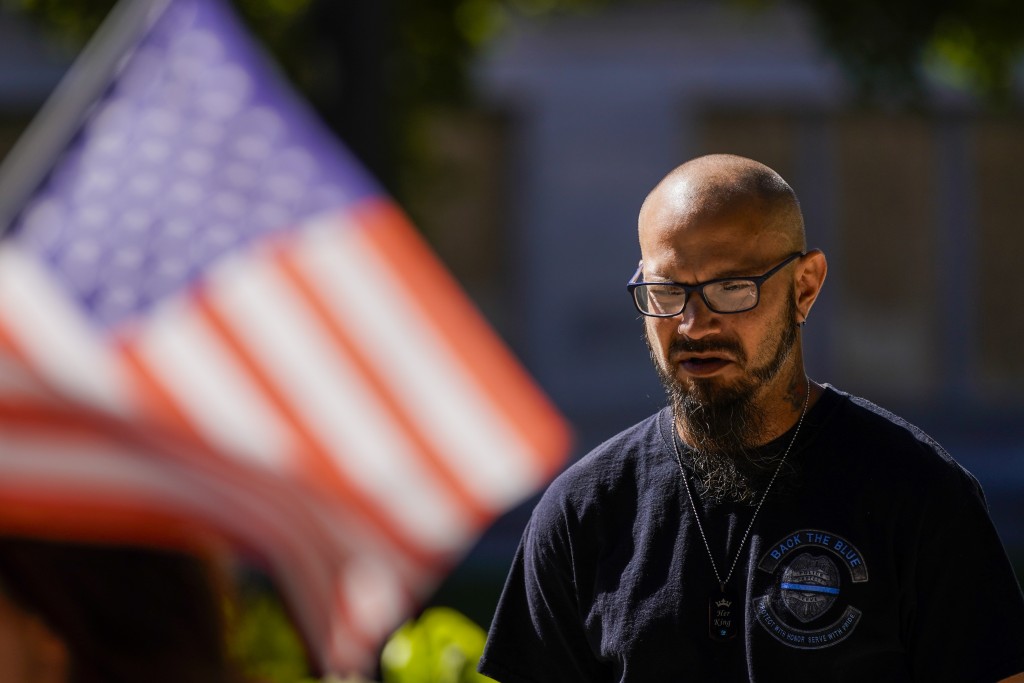 KENOSHA, Wis. (AP) — Scores of police supporters gathered Sunday in downtown Kenosha where protesters have been demonstrating against police brutality since the shooting of Jacob Blake last weekend.

Some attending the rally in the Wisconsin city wore “back the blue” shirts. Others carried American flags. They applauded when law enforcement vehicles rolled by.

“With the things that they face on a daily basis, they need that little extra push of love and to show that they are needed,” said Jennifer Peyton, 44, who attended the rally. “I mean, if you went in to work every day, and you were told that you were bad or had things thrown at you, I think it would weigh on your psyche a little bit, too.”

A Kenosha police officer shot Blake in the back Aug. 23, leaving the 29-year-old Black man paralyzed.

Protesters have marched in Kenosha every night since Blake’s shooting, with some protests devolving into unrest that damaged buildings and vehicles. Authorities say a teenager from northern Illinois shot and killed two protesters in Kenosha on Tuesday night.

Floyd, another Black man, was handcuffed and died after a Minneapolis officer pressed his knee into Floyd’s neck.

Blake was shot after three Kenosha officers responded to a domestic dispute call.

In cellphone video recorded by a bystander, Blake walks from the sidewalk around the front of an SUV to his driver-side door as officers follow him with their guns drawn and shout at him. As Blake opens the door and leans into the SUV, an officer grabs his shirt from behind and opens fire. Three of Blake’s children were in the vehicle.

City officials have identified Rusten Sheskey as the officer who shot Blake.

The Kenosha police union said Blake had a knife and fought with officers. State investigators have said only that officers found a knife on the floor of the car.

Blake is being treated in a hospital. His father, Jacob Blake Sr., said he’s paralyzed from the waist down.

Ben Crump, an attorney for the family, told CBS’ “Face the Nation” on Sunday that the younger Blake suffered “catastrophic injuries” that include a pierced spinal cord and shattered vertebrae. He has lost his colon and most of his intestine, Crump said.

Like Floyd’s death, Blake’s shooting has fueled a national movement against police brutality and the slayings of Black people by law enforcement officers.

The movement has further exposed deep divisions in the country.

Some people at Sunday’s rally signed petitions urging the recall of Gov. Tony Evers and Lt. Gov. Mandela Barnes, both Democrats, and added messages of support on handwritten posters thanking police as heroes.

The city’s mayor, John Antaramian, said Sunday that he will ask the state for $30 million to rebuild parts of Kenosha destroyed or damaged by the violence, according to the Kenosha News.

President Donald Trump has spoken out against the summer-long protests. He is expected to visit Kenosha on Tuesday to meet with law enforcement and survey damage from the demonstrations. Barnes indicated that Trump may not be welcome.

“I don’t know how, given any of the previous statements that the President made, that he intends to come here to be helpful and we absolutely don’t need that right now.” Barnes told CNN on Sunday.

Crump said the Blake family “has not been contacted at this time” by Trump.

On Sunday, some Kenosha residents gathered around a Family Dollar as volunteers passed out donations and painted messages of peace on boarded up buildings. A DJ played house music and hip-hop while volunteers danced, wearing masks to protect against the coronavirus.

“I needed this today,” said David Sanchez, 66, who is retired. “I went to church this morning and it was all about Jacob Blake and his family. It’s 100% positive.”

Sanchez said the Blake shooting forced Kenosha to “come out of the closet."

“There’s been a lot of prejudice here, for years,” said Sanchez, whose family relocated to San Antonio, Texas, in the 1950s. “We need to confront it.”