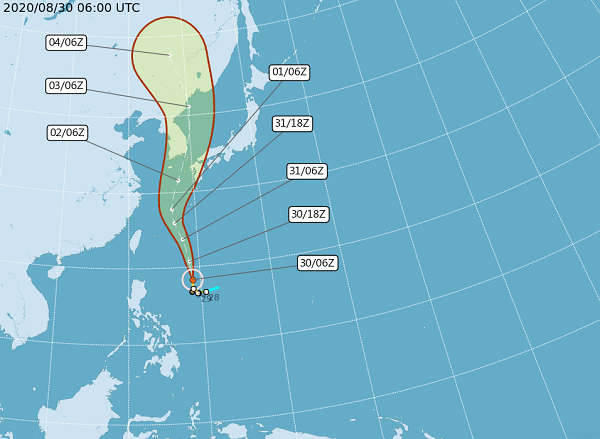 TAIPEI (Taiwan News) — Meteorologist Daniel Wu (吳德榮) predicted on Sunday (Aug. 30) that Typhoon Maysak, which has the potential to develop into the strongest typhoon so far this year, will not directly impact Taiwan, but its periphery will bring rain and cause temperatures to drop in the northern part of the country.

Wu said he expects the typhoon to pass through the Ryukyu Islands, Miyako Island, and the East China Sea before moving north-northeast towards South Korea, according to CNA.

Wu pointed out that Typhoon Maysak will intensify quickly after passing through the warm surface of the ocean and said it has the potential to grow stronger than Typhoon Bavi and Typhoon Vongfong.

Even though Typhoon Maysak will not make landfall in Taiwan, the north and northeast coast may see scattered showers starting Sunday night, the meteorologist said.

Wu also said he expects the outer system of the typhoon to bring rain and cool temperatures to northern Taiwan on Monday (Aug. 31) and Tuesday (Sept. 1). Central and southern Taiwan will be less affected, but there will be a chance of scattered showers or thunderstorms in those regions in the afternoon, the meteorologist said. He also predicted there will be storm surges on the coast around Taiwan and warned people to be cautious about engaging in beachside activities.

Northeasterly winds will arrive Thursday (Sept. 3) to Saturday (Sept. 5), increasing the chance of showers and thunderstorms and reducing temperatures across the island, Wu forecast, adding that the cooldown will be more notable in northern Taiwan.