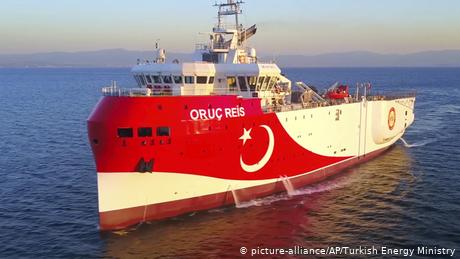 As if the decades-long conflicts between Greece and Turkey over Cyprus and the Aegean Sea Continental Shelf were not enough, now this: Both NATO partners are fighting over maritime territorial rights in the eastern Mediterranean. Both see the contested area as their own exclusive economic zone, which they alone are entitled to exploit as they see fit.

This most recent conflict was sparked by a Turkish ship exploring the disputed waters in a search for natural gas deposits, which it found. In this case, it is clear that Turkish President Recep Tayyip Erdogan wants sole possession of the promising find and the economic windfall it could bring.

Legal disputes in such complex cases are weighed in accordance with the United Nations Convention on the Law of the Sea (UNCLOS), a treaty defining rights on the world's oceans. Turkey was not a signatory when it was ratified in 1982. Nevertheless, legal experts are virtually unanimous in the belief that the treaty's rules reflect standing international law, and thus bind all nations to abide by them.

But Turkey isn't interested in any of that. Rather, Ankara is using a bilateral agreement signed with Libya as justification for its right to drill for natural gas off the coasts of Cyprus and Crete.

That cannot be. They are a clear example of an international agreement that is "injurious to a third party." These are the kinds of treaties that leave the door open to military aggression and conjure images from the darkest chapters of 20th century European history.

The international community cannot and must not accept Turkey's behavior. So what to do? First, further aggression and naval provocations must be put to an end — if possible through talks, when necessary through smart sanctions. The idea of a war in the Mediterranean — and between NATO partners to boot — seems utterly absurd. The problem is, however, that a lot of absurd things happen in this corner of the world nevertheless.

Both sides have to budge

Ideally, the International Court of Justice (ICJ) in The Hague in the Netherlands would mediate between the conflicting parties, provided both recognize the court's jurisdiction and declare themselves willing to accept its decision. Things came almost this far around the turn of the millennium, but Athens backed down in 2004, when it seems the newly elected conservatives feared the court may not decide in a way wholly to Greece's liking.

That example alone shows that Athens will have to relinquish one or the other of its ideals — one may be the concept that the entire Aegean Sea is a closed maritime area belonging exclusively to Greece.