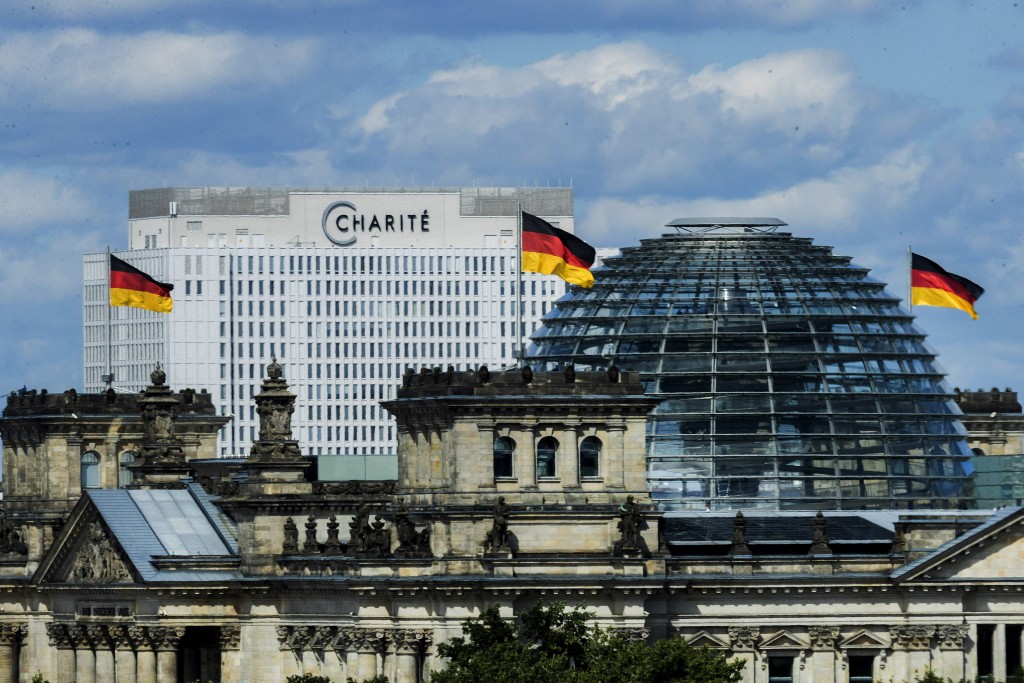 BERLIN (AP) — German doctors treating Russian opposition leader Alexei Navalny for a suspected poisoning said Friday the dissident is still in an induced coma but his condition is stable and his symptoms are improving.

Navalny, a politician and corruption investigator who is one of Russian President Vladimir Putin’s fiercest critics, fell ill on a flight back to Moscow from Siberia about a week ago and was taken to a hospital in the Siberian city of Omsk after the plane made an emergency landing.

Last weekend, he was transferred to the Charité hospital in Berlin, where doctors found indications of “cholinesterase inhibitors” in his system.

Found in some drugs, pesticides and chemical nerve agents, cholinesterase inhibitors block the breakdown of a key chemical in the body, acetycholine, that transmits signals between nerve cells.

Navalny, 44, is being treated with the antidote atropine. Charité said “there has been some improvement in the symptoms caused by the inhibition of cholinesterase activity.”

“While his condition remains serious, there is no immediate danger to his life,” the hospital said. “However, due to the severity of the patient’s poisoning, it remains too early to gauge potential long-term effects.”

Navalny’s allies insist he was deliberately poisoned and say the Kremlin was behind it, accusations that Russian officials rejected as “empty noise.”

Western experts have cautioned that it is far too early to draw any conclusions about what may have caused Navalny's condition, but note that Novichok, the Soviet-era nerve agent used to poison former Russian spy Sergei Skripal and his daughter in Britain, was a cholinesterase inhibitor.

The Russian doctors who treated Navalny in Siberia have repeatedly contested the German hospital’s conclusion, saying they had ruled out poisoning as a diagnosis and that their tests for cholinesterase inhibitors came back negative.

Many countries have pushed Russia to investigate the case, something that German Chancellor Angela Merkel said Friday should be done in “full transparency.”

Navalny was brought to Germany for treatment after Merkel personally offered the possibility of him being treated in Berlin.

“We have an obligation to do everything so that this can be cleared up,” Merkel told reporters at her annual summer news conference. “It was right and good that Germany said we were prepared ... to take in Mr. Navalny. And now we will try to get this cleared up with the possibilities we have, which are indeed limited.”

When there is more clarity about what happened, Germany will try to ensure a “European reaction” to the case, Merkel said. She cited the poisoning of Skripal and his daughter in Britain two years ago, which prompted many European countries to expel Russian diplomats.

So far, Russian authorities appear reluctant to investigate the politician’s condition. Navalny’s team submitted a request last week to Russia’s Investigative Committee, demanding authorities launch a criminal probe on charges of an attempt on the life of a public figure and attempted murder, but said there was no reaction.

Kremlin spokesman Dmitry Peskov said he saw no grounds for a criminal case until the cause of the politician’s condition was fully established. Russia’s Prosecutor General’s office said Thursday that a preliminary inquiry launched last week hasn’t found any indication of “deliberate criminal acts committed against” Navalny.

Geir Moulson contributed to this story. Litvinova reported from Moscow