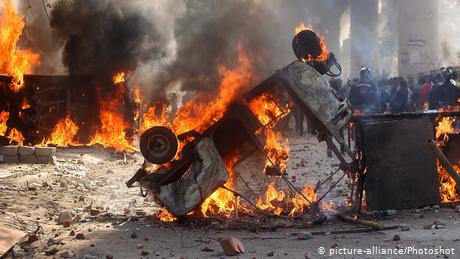 Police in the Indian metropolitan area of Delhi should be investigated for alleged human rights abuses committed during riots that followed protests against a new citizenship law at the end of February, Amnesty International (AI) said on Friday.

More than 50 people, most of them Muslims, died in the riots in the northeast district of Delhi, and more than 500 were injured.

It also spoke of speeches made by political leaders, including Kapil Mishra, leader of the ruling Bharatiya Janata Party (BJP), which it said helped fuel division. On February 23, it said, Mishra had given police a three-day ultimatum to remove protesters that was followed by widespread violence.

Speaking of the fact that there had so far been no investigation, Kumar said a message of non-accountability had been sent.

"This impunity sends the message to the politicians and police who advocate for violence in their speeches and fail to prevent the violence that follows that they can get away with committing grave human rights violations. This impunity needs to, and must, end in order to bring justice to the victims and their family member," he said.

When looking into allegations of police brutality, AI used its Citizen Evidence Lab, which ascertains the veracity of social media footage captured by normal citizens.

It said one such video showed Delhi police hitting and kicking a group of five injured men on February 24. The police are seen asking the men to sing the Indian national anthem before arresting them, it said.

India's Citizenship Amendment Act, which was passed in December last year, offers easier citizenship options to non-Muslims fleeing religious persecution from three nearby countries: Afghanistan, Pakistan and Bangladesh. Critics say the law marginalizes India's Muslim minority, and its passing triggered outrage and protests across the country. The law is the first time religion has openly been made a criterion for citizenship in India.