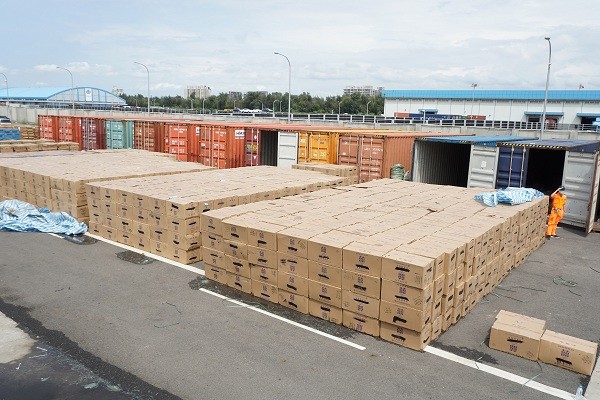 TAIPEI (Taiwan News) — Taiwan’s Coast Guard on Tuesday (Aug. 25) seized 5,525,000 packs of smuggled cigarettes with a market value of more than NT$500 million (US$16.7 million) from a foreign cargo ship in Taichung Harbor, the largest seizure of its kind in the harbor’s history.

Acting on a tip-off that smugglers were attempting to run cigarettes from a cargo ship by tenders before the Mid-Autumn Festival, the Coast Guard raided the Sierra Leone-flagged vessel as it was anchored at the harbor's No. 18 pier on Tuesday, according to CNA.

An investigation launched after the seizure found that the cargo ship had applied to enter the harbor on the grounds that it was in distress, claiming its main engine was in need of repairs.

When investigators eventually boarded the ship and inspected the containers, they found that 13 of them contained a total of over 5 million packs of untaxed cigarettes labeled as from China and South Korea.

There were more than 20 Indonesian and Chinese crew members on the ship, and apparently eight of the Indonesians wanted to disembark after they found out they had been working aboard a smuggling vessel. However, the Taiwanese captain forbade them from doing so and withheld two months’ wages.

The ship docked in Taichung Harbor on Aug. 23. Soon after, Indonesian sailors from the crew contacted a priest in Kaohsiung, who made calls to friends who in turn tipped off the Coast Guard.