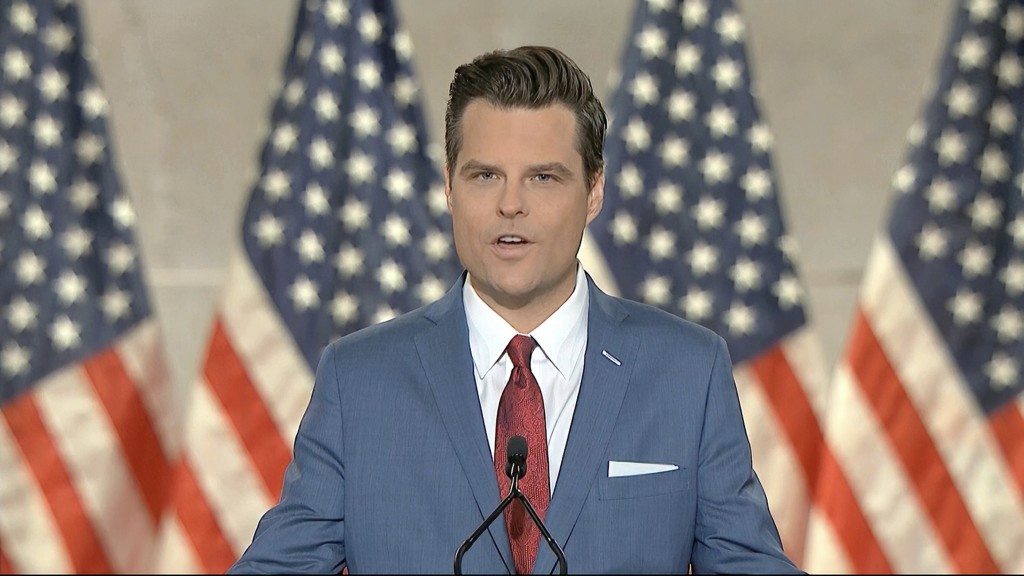 WASHINGTON (AP) — President Donald Trump aggressively asserted control over the Republican National Convention on Monday, overshadowing the prime-time speakers, as he made clear he wants voters to focus on him.

Here are key takeaways from the first night of the convention:

Never one to shy away from the spotlight, Trump showed he will be omnipresent at the convention, appearing every night and sure to dominate the proceedings.

He made certain he was highly visible Monday with some preliminary appearances and a spasm of tweets.

Traditionally, the presidential nominee — including Democrat Joe Biden last week — makes a fleeting convention appearance or two early in the week but largely stays on the sidelines, building anticipation for the acceptance speech on the final night.

Trump has tossed that conventions' convention aside.

He is expected to appear every night, potentially joining First Lady Melania Trump and Vice President Mike Pence at their prime-time speeches.

To Trump, the answer to nearly any crisis is almost always more Trump.

Some Republican operatives have expressed private worry that America is suffering from Trump fatigue.

But the president is not one to cede the stage. On Monday, he soaked in gauzy homage from supporters. And he’ll be joined by several others who share his last name: four of his adult children and a daughter-in-law will also speak.

BE AFRAID. BE VERY AFRAID

Trump complained last week that Democrats “held the darkest and angriest and gloomiest convention in American history.” But on opening night of their convention, Republicans are doing their share, spreading fear of a Biden victory on Nov. 3.

“Make no mistake: No matter where you live, your family will not be safe in the radical Democrats’ America,” Mark and Patricia McCloskey, the St. Louis couple who pointed firearms at Black Lives Matter protesters outside their house in June, were to say.

Conservative activist Charlie Kirk warned the convention that a Trump victory was imperative to “ensure that our kids are raised to love America, not taught to hate our beautiful country.”

Trump, he added, "is the bodyguard of Western civilization.”

South Carolina Sen. Tim Scott was to argue Democrats are campaigning on a “cultural revolution” for a “fundamentally different America.”

The apocalyptic messaging comes as Trump’s campaign strategists are aiming to motivate their own base with dire warnings of a Biden win — and to do their best to depress votes for the Democratic ticket from moderate voters who aren’t sold on Trump either.

VIRUS IN REMISSION AT RNC

The Republican National Convention is a testament to the campaign Trump wishes he could run.

For nearly six months, the coronavirus pandemic has upended every aspect of American society and scuttled the type of campaign — full of packed rallies and combustible issues — that Trump wanted to steer.

But the lineup and themes of the convention beginning Monday made mentions of the COVID-19 pandemic only in the context of what were portrayed of Trump's successes, with scant attention to the more than 175,000 Americans who have died, or the fact that Americans overwhelmingly give the president low marks for his handling of the crisis.

Trump made an appearance at the White House with everyday Americans, without recommended social distancing and with no one wearing a mask.

Even the setting of the program is meant as a rebuke to the virus. While the Democrats held a virtual convention out of respect for social distancing and public health guidelines, the president has insisted on the trappings of a convention, including in-person, live speeches and a crowd of up to 1,000 people on the White House South Lawn to hear his acceptance speech Thursday night.

AN EXTENDED VERSION OF ‘FOX & FRIENDS’

Republicans turned to a familiar crop of well-known conservative personalities and elected officials as they sought to engage their base to reelect the president.

The speaker ranks on opening night featured familiar Trump validators often featured on his favored cable network, Fox News Channel. From the president’s son Donald Trump Jr. and his girlfriend, Kimberly Guilfoyle, to firebrand Florida Rep. Matt Gaetz, the GOP demonstrated that the convention was aimed at the Trump zealots already converted to his cause, not those still on the fence.

The red-meat-delivering line-up reflected Trump’s wager in his campaign against Biden: that he can win with a motivated and organized minority of voters.