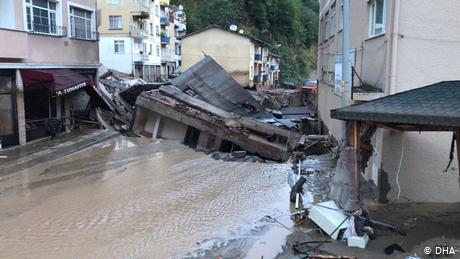 "This is the first time I've seen such a natural disaster," said Pakdemirli referring to Dereli's damage. The weekend rain had exceeded Giresun region's August monthly average by 1.5 times, he added.

The flooding Saturday-into-early Sunday had cut off access to 98 villages in the Giresun province, said interior minister Suleyman Soylu, speaking from the disaster scene in Dereli — a town of about 2,000 people.

"Not a single shop is left standing in this area. We will stand by our citizens and do everything to heal their wounds and rebuild," said Soylu, according to Turkish TRT media.

One of the five known dead was a police officer whose vehicle was swept away, said multiple reports.

Among those still missing were four colleagues and a mechanical digger operator.

Giresun province's governor, Enver Unlu, also cited by TRT, said people left stranded had included some at a Dereli wedding hall and others on a highway.

From Istanbul on Sunday, President Recep Tayyip Erdogan vowed: "We will quickly overcome the destruction" as Turkey's defense ministry said an A400M aircraft would deliver rescue equipment and personnel.

Turkey's Humanitarian Relief Foundation (IHH) said it had sent a team for search and rescue operations, adding access via the main road to Giresun's Dereli district was broken.

Meteorologists had forecast more heavy downpours for Sunday in the provinces of Trabzon and Rize — to the east along the Black Sea coastline.