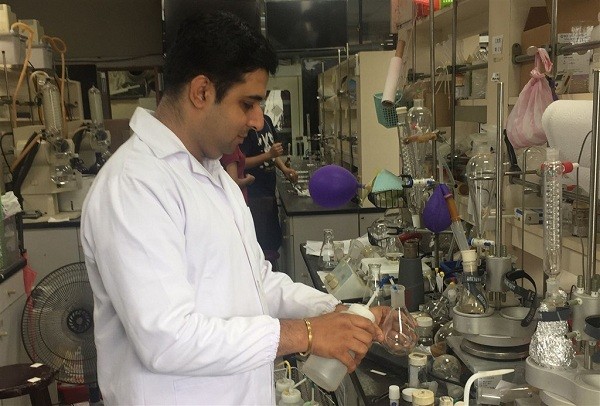 Kunal Nepali, a pharmaceutical scientist from India, recently obtained special permanent residency in Taiwan with the award of the Plum Blossom Card, based on his research on treatments for cancer, gout and hyperuricemia, the National Immigration Agency (NIA) said Sunday.

The card is given to foreign nationals who have made special contributions to Taiwan, have high-level professional or technical skills needed by Taiwan, or have invested over NT$15 million (US$504,150) in the country.

Card holders are granted permanent residency and are also eligible to pursue a simplified application process for Taiwanese citizenship, according to the NIA.

Nepali, 35, is one of only 119 foreign nationals who have been awarded the Plum Blossom Card since it was introduced in 2009, according to the NIA.

Currently an assistant professor at Taipei Medical University (TMU), Nepali was inspired to move to Taiwan because of the research work of TMU professor Liou Jing-ping (劉景平), the NIA said in a statement. In 2014, Nepali decided to come to Taiwan to join Liou's research on cancer treatments, the NIA said.

Since then, Nepali has developed drugs for the treatment of cancer, gout and hyperuricemia, which has been beneficial to patients and researchers, according to the NIA.

He has also received outstanding contribution awards from international scientific journals, including Bioorganic & Medicinal Chemistry Letters and the European Journal of Medicinal Chemistry, for his work as a reviewer, the NIA said.

Nepali's wife, Ritu Ojha, also studied at TMU and received a PhD in pharmaceutical sciences in 2018, the NIA said, adding that the couple and their child plan to apply for Republic of China (Taiwan) citizenship in the future.