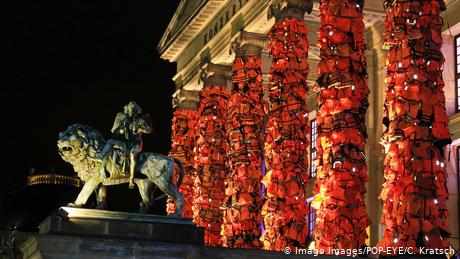 Russian dissident politician Alexei Navalny was flown from Omsk to Berlin for medical treatment on Saturday aboard a plane arranged by the Cinema for Peace Foundation.

The 44-year-old was in a coma after a suspected poisoning, although Russian doctors put his illness down to a possible blood sugar disorder.

The founder of the NGO behind his evacuation, Jaka Bizilj, said private donations had paid for the flight — a Bombardier Challenger chartered by a Nuremburg-based firm — as well as for the medical staff on board.

Bizilj told DW that plans for the evacuation were set in motion on Thursday after members of the Russian punk band Pussy Riot Nadya Tolokonnikova and Pyotr Verzilov appealed to the NGO for help.

"I got a call from Nadia Tolokonnikova from Los Angeles, from Pussy Riot, and from Pyotr from Moscow, asking me if we could help a dear friend, Alexei, who'd got poisoned too," Bizilj told DW in an interview. The foundation had flown Verzilov himself to Berlin in 2018 after he was poisoned and fell ill.

Dizilj stressed that although the governments of Germany's Angela Merkel and France's Emmanuel Macron had been briefed, Navalny's airlift to Berlin had been a "private" activity.

"It was very expensive to do it in at very short notice, but in the end, during the process, without having to think much about it, private persons came forward and took over [costs]," he said, adding that the charter flight would not burden taxpayers.

Born in Slovenia in 1971, Dizilj is a film and show producer with a list of connections that reads like a who's who of Hollywood and world diplomacy — including names like Mikhail Gorbachev, Sharon Stone and Ai Weiwei.

He launched the Cinema for Peace Foundation in 2002 to "influence through films the perception and resolution of global social, political, and humanitarian challenges of our time — and especially to oppose war and terror," according to the organization's website.

Its Genocide Film Library includes material on the 1992-95 Bosnia-Herzegovina conflict. The NGO also runs screenings for schools and students, including films such as South Africa's "Themba — a Boy Called Hope," about a football novice who loses his mother to HIV/AIDS.

Since its founding, the NGO has held an annual fundraising and awards gala to coincide with the Berlin Film Festival. The event often draws Hollywood stars and prominent political figures — last year actor Charlize Theron and former German Chancellor Gerhard Schröder were among the guests.

Rock star and rights activist Bob Geldof was once quoted as describing the foundation's galas, which aim to showcase work dedicated to peace and justice, as an "Oscars with brain."

But former Berlin Film Festival chief Dieter Kosslick wasn't convinced. According to media in Berlin, he called the gala evenings "absurd events," and also accused the organization of not being transparent with its funds.

Berlin's Tagesspiegel newspaper wrote in 2010 of the annual gala that "some 600 guests came, tickets cost upwards of €1,000. A law firm is scrutinizing the Cinema for Peace's revenue. Up until last year it was almost €2.5 million."

The foundation has been criticized for not publishing an annual report detailing its expenses and donations on its website. Bizilj has repeatedly pledged that external auditors would monitor the legal use of donations received.