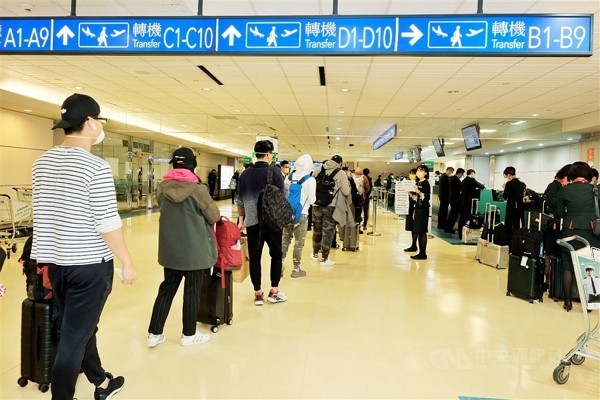 Border controls resulting from the COVID-19 pandemic caused Taiwan's travel income and expenses to plunge for the second quarter of this year to a new low since the data started to be collated in 1984, according to the central bank.

In the April-June period, travel income fell from US$1.435 billion in the first quarter to a new low of US$94 million, while travel expenses also dropped from the first quarter's US$2.253 billion to a record low of US$193 million, data released on Thursday (Aug. 20) by the central bank showed.

Fears over the COVID-19 spread brought the global tourism industry to a virtual standstill, the central bank said, so that Taiwan posted a travel service deficit of about US$100 million in travel services, the smallest deficit since the first quarter of 2016, when the figure stood at NT$342 million.

Due to the border controls imposed in mid-March, the number of outbound travelers from Taiwan plunged by 98.9 percent from a quarter earlier to only 47,000, while the number of travelers to Taiwan also tumbled by 99.6 percent to about 13,000, the central bank said.

The second quarter's service surplus -- part of the country's current account -- stood at US$750 million, it said.

The current account mainly measures a country's merchandise and service exports and imports.

The increase in merchandise trade surplus came after solid global demand for emerging technologies such as 5G applications and high- performance computing (HPC) devices, which helped the local electronics sector generate more sales in the world market, according to the data.

However, non-residents' portfolio investments in the financial account recorded a net fall of US$3.38 billion in the second quarter as foreign institutional investors cut their holdings in local shares.

The aggregate net outflow over the past 40 quarters was US$498.79 billion, raising concerns over continued fund outflows from Taiwan.

However, the central bank dismissed the concerns, saying that net financial account outflows are common among countries such as Taiwan, Japan, South Korea, Thailand and Germany, all of which have long-term current account surpluses.