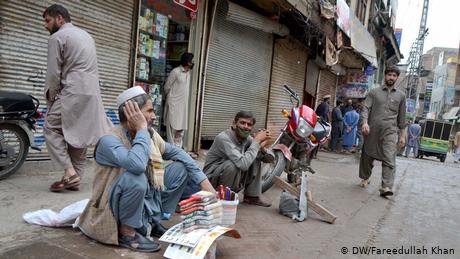 Soon after the COVID-19 pandemic hit Pakistan, the government imposed a partial lockdown in most parts of the country, shutting down businesses and public places. Authorities started easing restrictions in May and by the end of July, the lockdown was mostly lifted.

As of Wednesday, Pakistan has registered over 290,000 COVID-19 cases and more than 6,000 related deaths. The relative low number of cases could be a result of a significant fall in coronavirus tests, at least since early July, according to health experts.

Prime Minister Imran Khan's government now faces a huge challenge to revive the country's economy. Months of economic inactivity have rendered millions of people jobless, with the pandemic taking a heavy toll on the lives of informal workers.

Read more: How the COVID-19 crisis is affecting Pakistan's economy

Awais Ahmed, 27, moved to Karachi, Pakistan's economic hub, a year ago from a village in Sindh province. He told DW that prior to the coronavirus outbreak, he was earning around 27,000 rupees (€134, $160) per month, which was enough to support his wife and kid.

"The pandemic changed everything. I was working in a garment factory, but on March 29, the owners fired me and some 700 other workers because of the COVID-19 lockdown. My financial situation deteriorated and I had to borrow money from friends and relatives," Ahmed said. "Finally, I returned to my village totally broke," he added.

"No help came from the government. Now I am working in the construction sector in Larkana city but I hardly get work on a regular basis."

Amber Shahid, 42, used to work for a telecommunication company. She, too, lost her job because of the pandemic. "I was terminated in February along with hundreds of other employees without any notice. I have been jobless since then, facing financial hardships. Despite clear orders from the government to not sack workers, thousands of them have lost employment during the pandemic," Shahid told DW.

Nasir Mansoor, a Karachi-based trade unionist, told DW that factory owners secured loans from the government on low interest rates, but instead of supporting workers they fired them without any notice.

"Most workers in informal sectors have not received direct help from the government. It is unfortunate that the government did not act against factory owners who laid off their workers," Mansoor said.

The government says it is doing its best to support workers. "We gave cash to over a million laborers. We also opened the construction industry earlier despite opposition and have now fully restored industries and businesses to make things easier for them. I believe that the situation will get better in coming months as the economy is likely to bounce back," Muhammad Iqbal Khan, a ruling party lawmaker, told DW.

Contrary to the positive projection of GDP growth rate of 2.3% by the Pakistani government, the World Bank has projected 1 percent GDP contraction for the country in the fiscal year 2020-21.

"I do not see any chance of improvement," Qaiser Ahmed Shaikh, a prominent industrialist and member of parliament's finance committee, told DW, adding that the global economy is facing recession due to coronavirus. "All we can do is wait for the coronavirus vaccine and the normalization of economic activities around the globe."

Salman Shah, a former finance minister and current adviser to Punjab province's chief minister on economic affairs, admits "more than 20 million people have lost their jobs" due to the health crisis.

"Only 2.5% of GDP is being spent on providing social safety to the working class; it should be 10% at least. We want to increase it but the International Monetary Fund's conditions don't allow us to do that," Shah underlined.

In May, Planning and Development Minister Asad Umar said that around 18 million people in Pakistan could lose their jobs because of the pandemic, whereas 20 to 70 million people might fall below the poverty line this year.