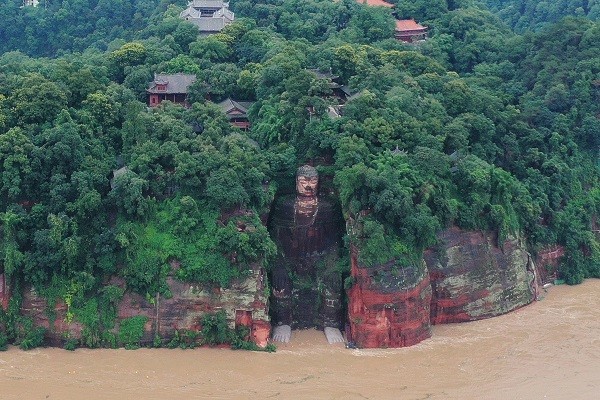 TAIPEI (Taiwan News) — The torrential rainfall that has lashed Sichuan Province over the past week has resulted in a flood so massive that 100,000 people have been evacuated, World Heritage Sites are under threat, and the beleaguered Three Gorges Dam is facing the largest inflow in its history.

Since the start of June, tremendous flooding has hammered the Yangtze River, Yellow River, and Huai River basins, affecting some 63.5 million people in 27 provinces and inflicting 178.96 billion Chinese yuan in economic losses, according to Beijing's state-run media outlet China News. On Monday (Aug. 17), Sichuan Province, which sits on the upper reaches of the Yangtze River, saw the formation of the "No. 5 Flood," just days after the "No. 4 Flood" passed through the Three Gorges Dam.

According to a report by the Sichuan Provincial Meteorological Service released on Tuesday (Aug. 18), from 8 p.m. on Aug. 14 to 8 a.m. on Aug. 18, Sichuan experienced continuous heavy rains, mainly concentrated in the western reaches of the Sichuan Basin, the Western Sichuan Plateau, and the Panxi region. As for total precipitation during this period, 1,198 weather stations in Sichuan reported 100 to 249 millimeters of rain, 637 reported 250 to 399 mm, and 166 reported 400 to 600 mm, with the maximum amount of accumulated rainfall being 865 mm in Huangxuzhen in Deyang City's Jingyang District.

The engorged rivers have inundated urban sections of the cities of Ya'an and Leshan, forcing authorities to evacuate over 100,000 people. The state-run outlet stated that the Ya'an section of the Qingyi River has been struck by the biggest flood in 100 years.

Meanwhile, water levels in the Qingyi River basin and at the lower reaches of the Dadu and Min rivers are expected to exceed warning levels. In the city of Leshan, firefighters were dispatched via helicopter and speed boat to rescue 1,020 stranded on Fengzhou Island.

Both the UNESCO World Heritage sites of Jiuzhaigou National Park and the Leshan Giant Buddha have been closed off to the public due to safety concerns. Floodwaters have now reached the feet of the 71-meter, 1,200-year-old statue for the first time since 1949, according to Xinhua.

On Monday evening, local police and park staff piled sandbags on the platform below the Buddha's feet in order to construct a dam-like barrier to shield the Tang Dynasty statue. However, as of 10 a.m. on Tuesday, the floodwaters had risen past the barrier and began to cover the statue's toes.

In Sichuan's neighboring megacity of Chongqing, which is also on the upper reaches of the Yangtze, local authorities on Tuesday upgraded the flood-control response to Level I, according to Beijing's state-run voicebox the China Daily. Municipal water resources authorities predict that the flood will impact the city from Tuesday to Thursday (Aug. 20).

Meanwhile, downstream, the Changjiang Water Resources Commission declared a red alert on Tuesday. It stated that the water at some of its monitoring stations was expected to surpass the "guaranteed" flood protection level by more than 5 meters.

As for the vaunted Three Gorges Dam, the peak inflow is expected to reach 74,000 cubic meters per second on Thursday (Aug. 20), per the Ministry of Water Resources. According to China's state-run TV news station CGTN, the dam has already opened 10 of its gates in preparation for the influx of still more floodwater.

China: Heavy rains, floods in Chengdu, Sichuan, heavy losses in Jintang County, and the major roads in Chengdu where one can swim. 16-08-2020 pic.twitter.com/EnV21gQtd2

Toes of the Leshan Giant Buddha (a large Statue of Buddha) were almost submerged in the city of Leshan after severe flooding pic.twitter.com/fJDNxPr0GN