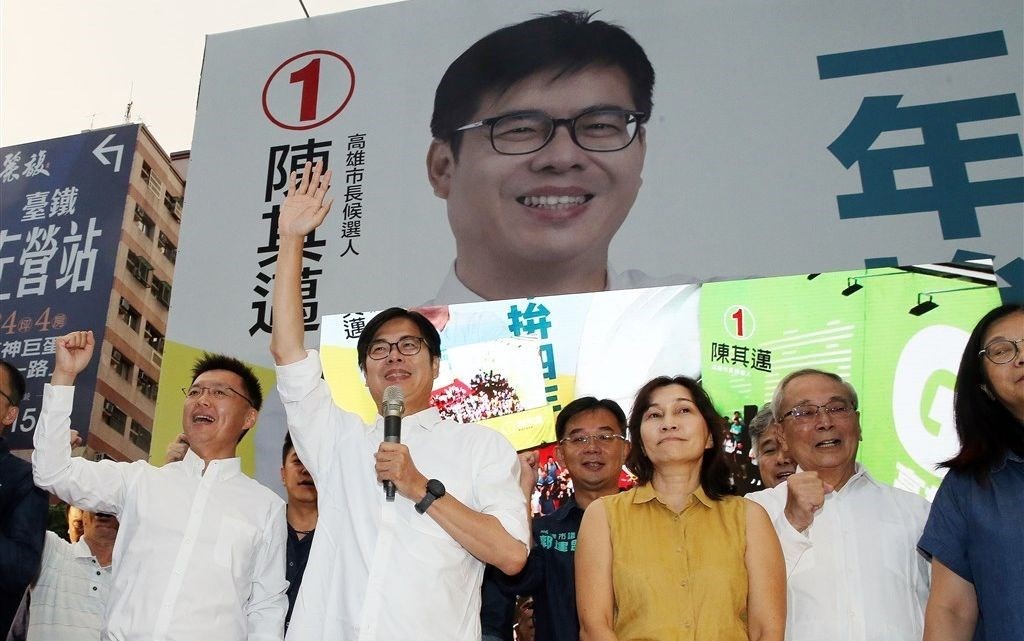 KAOHSIUNG (Taiwan News) — The political currents swirling around the office of mayor in Kaohsiung have involved high drama and hyperbole as the Han Kuo-yu (韓國瑜) era came and — not a moment too soon — went.

With his full-time replacement formally elected last weekend, the main takeaway from the election was just how little interest there was from both the media and the people of Kaohsiung. Why? The finger of blame has to be pointed squarely at the two main candidates.

The DPP candidate and eventual winner, Chen Chi-mai (陳其邁), is a deeply uninspiring career politician whose lack of appeal and poor campaign were big factors in Han Kuo-yu’s victory in 2018. Chen's KMT opponent, Li Mei-jhen (李眉蓁), was even less impressive and ran a risible campaign beset by scandal and incompetence from start to finish.

Back in June, when Chen’s candidacy was announced, I wrote that the KMT had a decent chance of retaining Kaohsiung if it could pick the right candidate, a person with “character and personality, a strong public speaker and debater, with decent local roots.” They didn’t, and they were humiliated.

Han’s catastrophic year and a half in office was hugely destructive for the KMT in the southern port city. His bungled presidential bid and overt backing of China did him and his party no favors.

No doubt the KMT will hold an autopsy after this latest humiliation at the ballot boxes. A number of public figures from within the party, including former Chairman Eric Chu (朱立倫) and KMT caucus whip Lin Wei-chou (林為洲) are calling for reform.

Nothing more, nothing less

But if their review of this election tells them anything, it should be that nothing less than fundamentally changing the KMT and what it stands for is going to make them electable again.

While it is easy to dwell on Li Mei-jhen’s awful numbers, we shouldn’t overlook the fact that votes for Chen Chi-mai were well down too. In 2018, he secured 742,239 votes in finishing runner-up to Han. Last weekend, only 671,804 people voted for him.

The lack of a credible opponent is likely to have been one factor, with many voters choosing not to bother turning out in a by-election that was very much a foregone conclusion.

But there is no doubt that many people in Kaohsiung are far from happy that such a weak and uninspiring candidate has been foisted upon them again. Chen had already lost one mayoral election and been removed from office — having briefly been acting mayor in 2005.

Chen faces an uphill struggle to win over supporters, with many factions already promising to scrutinize him as much as they did Han. He has two years to prove his worth, and if he has failed to do so by the 2022 mayoral election, any half-decent candidate will have a good shot at winning Kaohsiung.

The other big takeaway from last weekend’s election was the lack of any obvious interference from the Chinese Communist Party (CCP).

In 2018, fake news and online influence campaigns from the CCP played a big part in getting their man Han elected. But this time, there was none of this.

There was very little pro-KMT material doing the rounds on the CCP-controlled LINE groups and Facebook pages that Han supporters have been glued to for the past few years. They are instead focusing on spinning the CCP’s annexation of Hong Kong and attacking the U.S.

In some ways, this is good news. After all, no one wants a foreign totalitarian regime trying to meddle in Taiwanese democracy.

But it could be ominous too. Why hasn’t the CCP tried to influence this election as they have pretty much every other election over the past 25 years?

It is possible that they too were so unimpressed with Li and so sure her campaign was doomed from the start that they decided to wait for the next one?.

But it is also possible they decided not to bother wasting time influencing Taiwanese elections because they are planning to use a more aggressive military approach to dictate Taiwan’s future. This is something the Taiwanese government needs to be acutely aware of.

The main democratic triumph of this by-election was the ousting of Han, a mayor who lied throughout his campaign and fundamentally failed to deliver during his short spell in office.

The election of his replacement has been something of a damp squib. Anyone is better than Han, but Chen Chi-mai is far from the inspirational leader the people of Kaohsiung really wanted, and it remains to be seen whether he gets much longer in office than his predecessor.