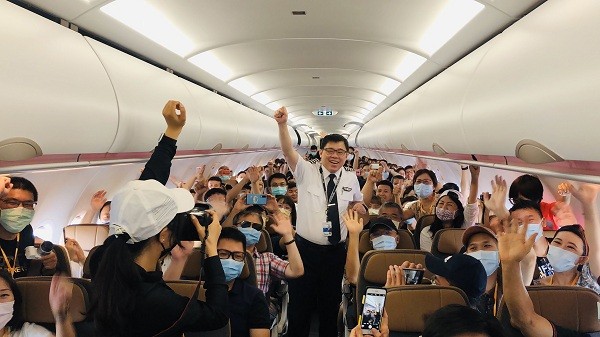 TAIPEI (Taiwan News) — Starlux Airlines Chairman Chang Kuo-wei (張國煒) on Sunday took the company’s employees and fans for a four-hour pleasure flight to Taiwan’s northern and southernmost points with him at the controls.

The special pleasure flight was a gift the company offered to its employees and their relatives, in addition to 40 fans of the airline. The flight essentially followed the same route as the commercial pleasure cruise that took place on Aug. 7, with the exception of a flyover of the Diaoyu Islands, according to a CNA report.

Due to the limited number of passengers, 40 fans were selected from a draw conducted by the airline on Facebook, and the employees were drawn from those who had signed up for the flight.

The special flight, which used an A321neo jet, took off at 11 a.m. from Taoyuan International Airport and landed at 2:40 p.m. The plane flew over the Diaoyu Islands, then along eastern Taiwan’s coastline, passing Turtle Island, Dongao Bay, Qingshui Cliff, East Rift Valley, Hengchun Peninsula, and the Dongsha Islands (東沙群島, Pratas Islands), where the plane turned back and flew the same route back to Taoyuan, according to Chang; when the plane hovered over Taitung, passengers were able to see Green Island and Orchid Island, the captain added.

Chang also walked around in the cabin, greeting the passengers and taking photos with them before taking off.

Due to border restrictions enforced by most of the world amid the Wuhan coronavirus (COVID-19) pandemic, it is hard for Taiwanese to travel abroad. In order to capitalize on growing demand, airlines in Taiwan have come up with the idea of taking passengers around the nation for several hours before landing; these special domestic flights have sold out immediately right after they went up for sale.