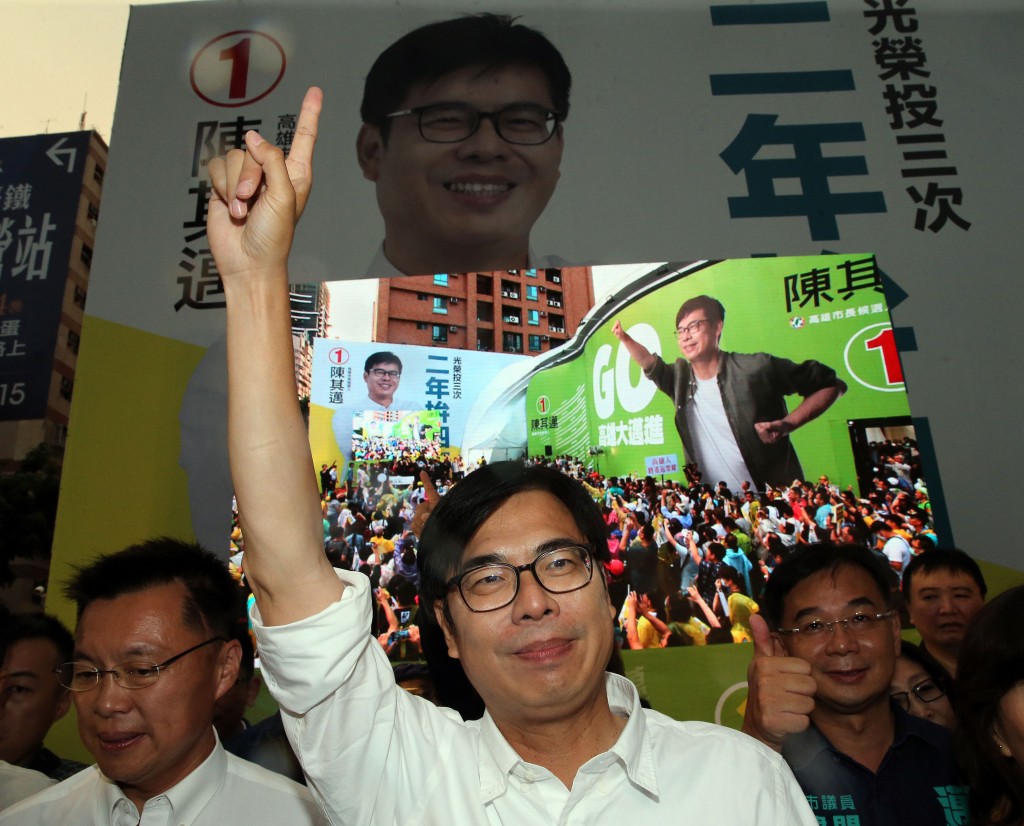 Opposition Kuomintang (KMT) Chairman Johnny Chiang (江啟臣) on Saturday vowed to bring his party back to power in Kaohsiung in 2022, following a crushing defeat for the KMT in the mayoral by-election in the southern city that day.

"Today's election results should not be seen as a rejection by Kaohsiung citizens of the KMT, but as them urging us to work harder," Chiang said at a press conference in which KMT's mayoral candidate, Li Mei-jhen (李眉蓁), conceded defeat to Chen Chi-mai (陳其邁) of the ruling Democratic Progressive Party (DPP). He said the KMT should stand firm in its reforms and learn from its mistakes.

"We will take action to win back the support of Kaohsiung's citizens and win back Kaohsiung in [the] 2022 [local government elections]," he said.
Chen won Saturday's election by a wide margin over his rivals, garnering 671,804 votes, or 70.03 percent of the total against Li and the Taiwan People's Party's (TPP's) Wu Yi-jheng (吳益政), who won 25.90 percent and 4.06 percent of the vote, respectively.

Among the 38 electoral districts in Kaohsiung, Chen scored an overwhelming victory against his rivals in 35 of them, including several in which the KMT used to have a strong foothold, according to data released by the Central Election Commission. The data also indicated that Chen accounted for 68.19 percent and 71.74 percent, respectively, of the total votes cast in Fongshan and Sanmin, the city's two largest districts in the city, which helped him gain the upper hand in the election.

Following the defeat in the mayoral election—the first major test for Chiang in his capacity as KMT chairman after assuming the position in March, some KMT sources said he could face challenges from other contenders who are also eyeing the position in the upcoming KMT chairmanship election scheduled for May 2021, since he failed to help Li secure the support she should have had from the party. The sources said former KMT Chairman and New Taipei Mayor Eric Chu (朱立倫) and even Han Kuo-yu (韓國瑜), who was removed in a recall vote as Kaohsiung mayor in June, could become formidable contenders against Chiang in the KMT chairmanship vote.

Saturday's mayoral by-election was held after Han's recall, as his decision to enter the 2020 race for the presidency just months after taking office in the southern city and his own missteps fed persistent efforts by DPP city councilors and others displeased by his actions to bring him down. Chiang is expected to come up with measures to reform the KMT at the party's national congress set for September, but the sources said he is likely to face rejection by the party's members at that time, which will serve as a no-confidence vote for him.

KMT legislative caucus whip Lin Wei-chou (林為洲), meanwhile, said that several factors contributed to the KMT's loss, including the party's lack of understanding of Kaohsiung's political culture and the short campaign period, which resulted in Li being unprepared as a candidate. Saturday's election results showed that the KMT has yet to overcome its lowest ebb, Lin told CNA, adding that the KMT will have to face the loss head-on and be bold in its reforms.

For the DPP, meanwhile, the victory paves the way for the ruling party to score a bigger victory in the 2022 local government elections, political observers said.
DPP sources said that if Chen can deliver on his promises to improve Kaohsiung after he takes office, he is expected to win a second term. In his acceptance speech, Chen outlined four priorities for Kaohsiung -- upgrading the city's industries, creating new jobs, improving transportation infrastructure and ensuring cleaner air.

Echoing the DPP sources, Shen Yu-chung (沈有忠), a political science professor at Soochow University, said that as long as the DPP is able to successfully boost the economy—which has been hurt by the COVID-19 pandemic—the party could extend its momentum into the 2022 local government elections.
However, he also said that although the DPP is the ruling party of Keelung, Taoyuan and Hsinchu cities in northern Taiwan, it remains to be seen whether the party will win again in 2022, as the KMT still has strong support in those three cities.

Meanwhile, Saturday's vote represented a setback for Taipei Mayor Ko Wen-je (柯文哲), chairman of the TPP, as the party's candidate won only 4.06 percent of the total votes cast, less than half of the 8.51 percent of votes the party won in the legislative elections held in January, political observers said. They said Saturday's by-election showed that Ko's influences are fading, so the poor performance of the TPP could become a hurdle for the Taipei mayor in the 2024 presidential election, in which he is expected to run.