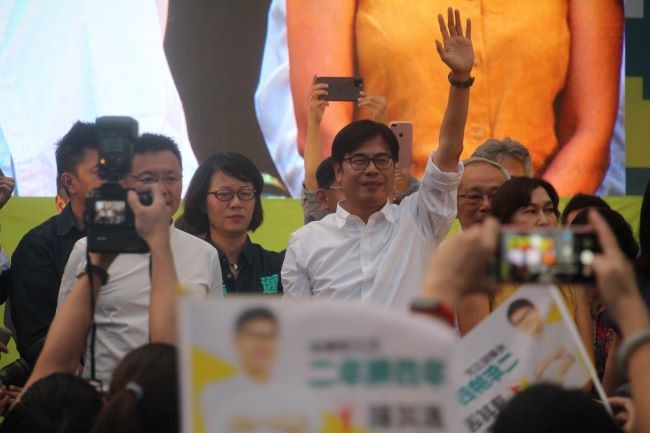 Chen lost his first mayoral bid to former mayor Han Kuo-yu (韓國瑜), the populist KMT candidate who swept to an upset victory in the traditionally deep green metropolis in 2018. Han, who mounted an unsuccessful bid for Taiwanese president less than a year after being elected mayor, was voted out of office in June in the country's first-ever mayoral recall. After casting his vote at a polling site on Gushan District's Meishu E. 2nd Road, a doctor in his 30s surnamed Lin (林) said he hopes the new mayor will be more proactive than his predecessor in further developing the city on the environmental, economic, and medical fronts. He stated that "The last mayor — he could do almost nothing in his job, so I want to choose another one who can perform his duties."

After Chen's victory rally, a Kaohsiung couple in their 30s, surnamed Liu (劉), expressed hopes that the incoming administration will see to the city's transportation infrastructure and industry. In particular, Mrs. Liu said she would like the MRT system to be expanded beyond the existing Red and Orange lines and Circular light rail, while her husband added that he hopes the Ciaotou Science and Technology Park will be developed further. One woman in her 20s surnamed Chang (張), a Taichung native working in the bio-medical industry, told Taiwan News that the election had buoyed her hopes. Chang was a volunteer in the lead-up to the referendum in 2018, when the DPP was handed devastating losses and Han defeated Chen.

She said that at the time, this led her to wonder if Taiwanese had chosen to embrace traditional values and that after Han's victory, and she lost hope about the country's future. She said she has gradually seen a sea change among the Taiwanese public during Hong Kong's anti-extradition protests last year, which were widely attributed with helping President Tsai Ing-wen (蔡英文) secure her second term in the January election.