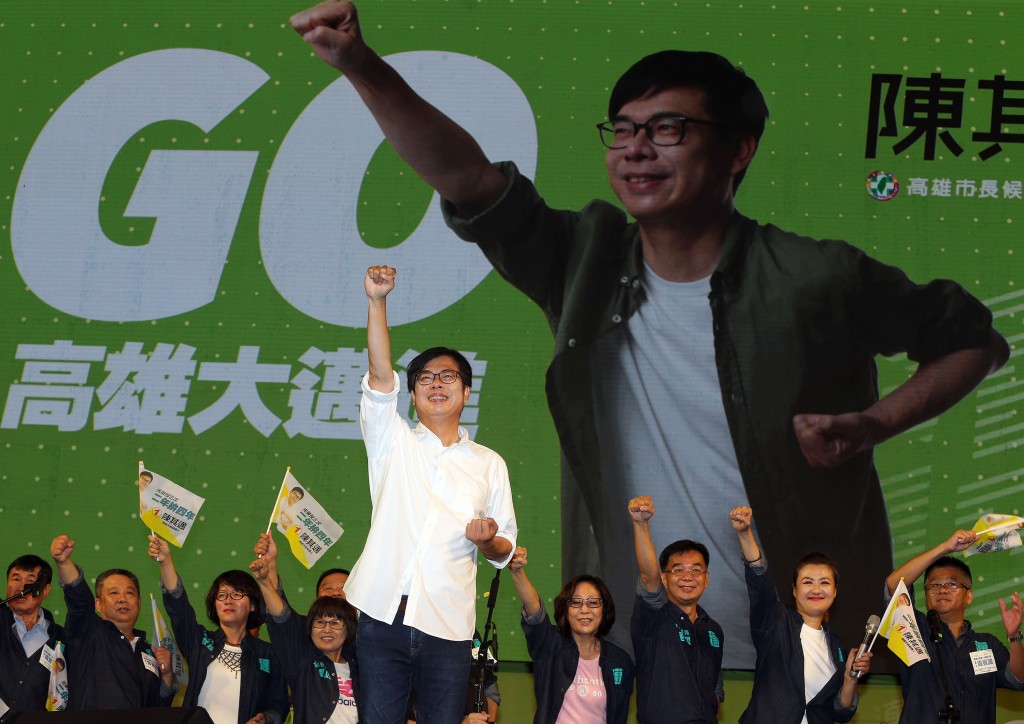 TAIPEI (Taiwan News) – Former Vice Premier Chen Chi-mai (陳其邁) of the Democratic Progressive Party (DPP) won the mayoral by-election in Kaohsiung by a record landslide Saturday (Aug. 15), ending an intermezzo of less than two years during which the Kuomintang (KMT) ruled the city.

Chen’s percentage in the vote was the highest for Kaohsiung mayoral elections in the period since 1994, overtaking DPP Mayor Chen Chu’s (陳菊) 68.08 percent in the 2014 polls.

Throughout most of the early evening, Chen Chi-mai maintained a three-to-one lead over Li in the ballot counting. By 5 p.m., one hour after counting started, Chen had received more than 300,000 votes, while Li Mei-jhen trailed with about 100,000, and Wu came a distant third with about 16,000 votes. Wu acknowledged his defeat at 5:45 p.m., congratulating Chen on his imminent win.

In his victory speech, the mayor-elect emphasized the four key issues he wanted to work on: economic transformation, employment, transportation and the fight against air pollution. Saturday’s result was a victory for democracy and for Kaohsiung, he said.

The DPP controlled the southern industrial port city from 1998 until the surprising 2018 defeat by Chen to populist KMT candidate Han Kuo-yu (韓國瑜). However, the new mayor’s grandiose promises and controversial statements soon lost him popularity, accelerating after his defeat in the Jan. 11 presidential election.

He was trounced in a recall vote on June 6 which necessitated the organization of the by-election, in which he was not allowed to participate. It was only on the final day of campaigning, on Friday (Aug. 14), that Han appeared at a rally to express his support for Li.

Chen is expected to be sworn in as mayor by the end of August, and will serve out the remainder of Han’s term, until Dec. 25, 2022. On the opposition side, Li’s failure to win one third of the vote could also have consequences for KMT Chairman Johnny Chiang (江啟臣), potentially encouraging challengers to threaten his grip on the party, reports said.

Kaohsiung City has 2.3 million eligible voters, with the DPP camp estimating early on that about 42 percent of those voters had turned out to cast a ballot Saturday, cable station TVBS reported.