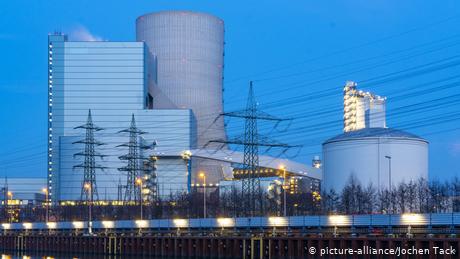 In parallel acts Friday, Germany's BUND branch of Friends of the Earth handed over a 41,500-person petition to the Finnish embassy in Berlin, while alongside the plant itself protesters in canoes paddled the adjacent Dortmund-Ems canal.

The petition called on Finnish Prime Minister Sanna Marin to quickly decommission the plant, which only went online in May. BUND's Antje von Broock describing Datteln as "superfluous," given Germany and Finland's policies on climate warming.

Despite recent booms in renewable energy sources such as wind and solar power generation, coal still covers about a quarter of Germany's energy usage.

The federal and regional NRW governments argue that Datteln's combustion efficiency enables the decommissioning of older plants as part of Berlin's plan to exit coal-generated power by 2038.

Read more: Germany and hydrogen — €9 billion to spend as strategy is revealed

"If the railways were to stop consumption of the dirty coal-fired power, this could mean the end of the power plant responsible for excessive energy supply.''

Both are leading figures in the Fridays for Future movement.