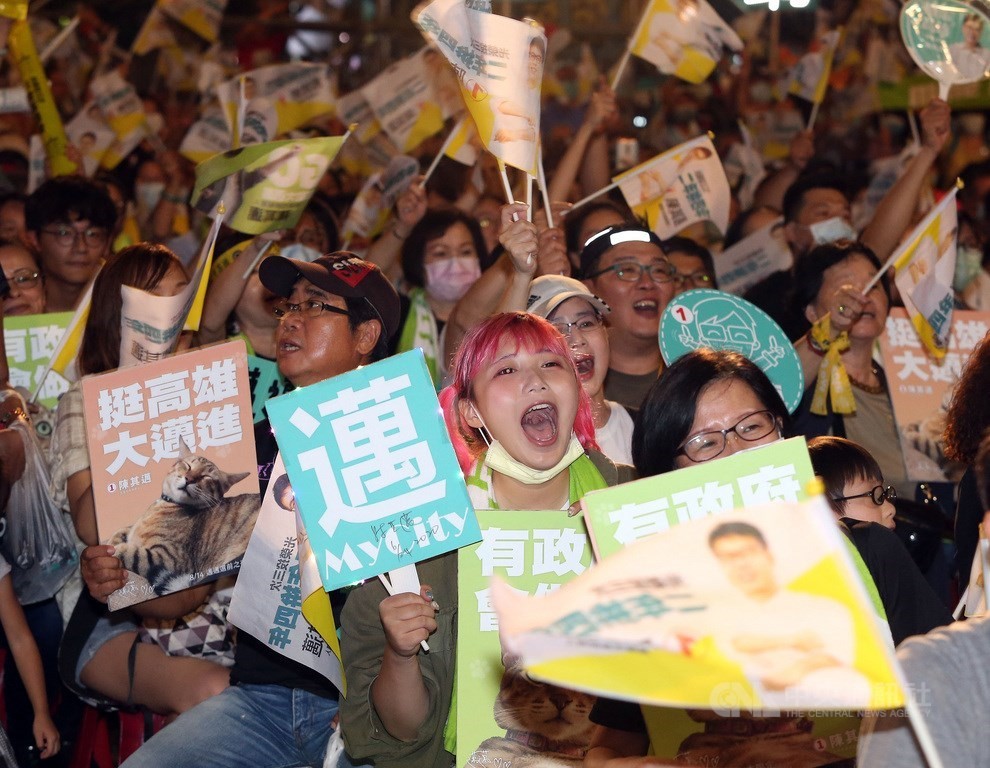 The final campaign rallies of the main candidates in Saturday's mayoral by-election in Kaohsiung drew big crowds Friday night even though the outcome in the minds of many is a foregone conclusion.

The by-election is being held to fill the vacancy left by the KMT's Han Kuo-yu (韓國瑜), who was recalled and removed from the post in June after being elected in November 2018.

Chen, who lost the 2018 race by a 9 percent margin to Han, is widely viewed as the overwhelming favorite in Kaohsiung -- a stronghold of the DPP, which had ruled the southern port city for 20 years before Han's election.

If elected, Chen will serve out the remainder of the term Han initially won that ends in December 2022.An estimated 100,000 people attended Chen's rally, at which President Tsai Ing-wen (蔡英文), Vice President Lai Ching-te (賴清德), and Premier Su Tseng-chang (蘇貞昌) all made appearances.

Praising Chen as the right person to "bring life back to Kaohsiung," Tsai said Chen wanted to prove that recalling Han was right, and that he was committed to changing the future of the city.

Tsai urged Chen's backers to vote for him and help him get more than the 890,000 votes that Han garnered in the 2018 Kaohsiung mayoral election. Meanwhile, KMT Chairman Johnny Chiang (江啟臣), former President Ma Ying-jeou (馬英九) and Han attended Li's rally in hopes of cementing support for her.

In his first public appearance since being recalled, Han urged the public to back Li, help Li become mayor of Kaohsiung and help Chen to become premier to take the place of Su for the sake of Kaohsiung.

Pointing out that Kaohsiung has built up debts of more than NT$300 billion (US$10 billion), Han said Kaohsiung needs a premier who really loves the city.
Although Su said the Executive Yuan would grant NT$400 billion in subsidies to Kaohsiung, Han said "we don't want any favors from Su, because we want Chen to be premier to help out Kaohsiung directly." Speaking before a motorcade to rally support earlier in the day, Wu called on voters to break free from political partisanship. Wu said he could not tell how many votes he will get but said he has been getting better feedback than expected in recent days after presenting his policies in the Aug. 1 policy presentation event.

Wu did not hold a rally Friday evening but still felt hopeful he could come from behind quickly enough to win the by-election as the situation was changing.