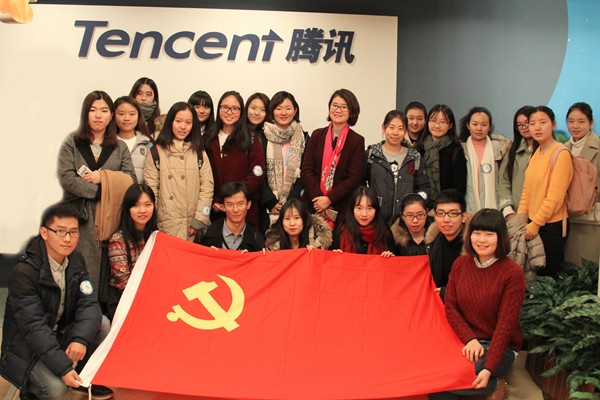 TAIPEI (Taiwan News) — As a Trump ban on transactions by WeChat is set to take effect on Sept. 15, a photo has surfaced showing top executives posing with party members and a communist flag inside the headquarters of its parent company Tencent in Beijing — making the close ties between the corporation and the Chinese Communist Party (CCP) abundantly clear.

On Aug. 8, human rights activist Jennifer Zeng posted on Twitter a photo of a CCP event held inside the corporate headquarters of Tencent in Beijing's Haidian District, showing employees and CCP members holding a communist banner. The photo originates from a report on a CCP event held at the headquarters in 2016.

The event was organized by a branch of the CCP of Beijing Normal University's School of Journalism and Communications and held inside Tencent's corporate headquarters in the Zhongguancun technology hub in Haidian in late December of that year.

Titled "Entering Tencent to Acquire Wisdom of Party Building," the event was attended by 50 students, academics, and members of the CCP. Without mentioning their name, the article states that the CCP member in charge of party affairs for Tencent's Beijing office explained the party's operations inside the tech giant to the guests.

All Chinese companies, public or private, are required to have a member of the CCP on staff to hand down official party edicts. In addition, many companies have an internal CCP committee that comprises part of the governance structure.

According to the report, when Tencent's party branch was upgraded to a party committee in 2011, it had a total of 5,593 party members inside the corporation. The report then stated that Tencent upgrades and adjusts the party organization structure to follow the company's business development and organizational structure reforms. It added that it "flexibly establishes" new party organizations within the company based on the number of party members, regional distribution, product lines, and business divisions. The article boasted that Tencent, China's leading network platform, "firmly conveys the voice of the party and the government" and sings "patriotism, dedication, and harmony" as its "main online melody."

In an article published in 2017, the CCP recognized 11 members of an "outstanding party branch" within Tencent. The report points out that the 11 members of the CCP branch are all company executives or heads of major business departments.

It then listed Senior Vice President of Tencent Holdings Ltd., Guo Kaitian (郭凯天), as the secretary of the party committee. The propaganda piece mentioned that three deputy secretaries in the committee are in charge of the company's information security management, network, media, and public policy.

The seven other committee members were said to be part of a management team responsible for important business units. Having such high-level executives in key committee positions enables the party "to deeply integrate with the enterprise strategy and corporate culture, and make fertile soil for mutual promotion and progress, enabling Tencent to have a firm foothold in the ideological struggle," boasted the author.

According to the report, Tencent that year had 7,915 employees who were CCP members. The company's committee is divided into 12 general party branches and 116 local branches, located in Shenzhen, Beijing, Shanghai, Guangzhou, and Chengdu.

The article then boasted that 23 percent of the company's employees are CCP members. Among the "newly developed party leaders" more than 80 percent are team leaders and key technical personnel.

As for new recruits, it wrote that out of 1,800 college graduates who joined the firm in 2017, 1,200 were CCP members, indicating that the party aggressively seeks to raise the percentage of party members in the corporation.