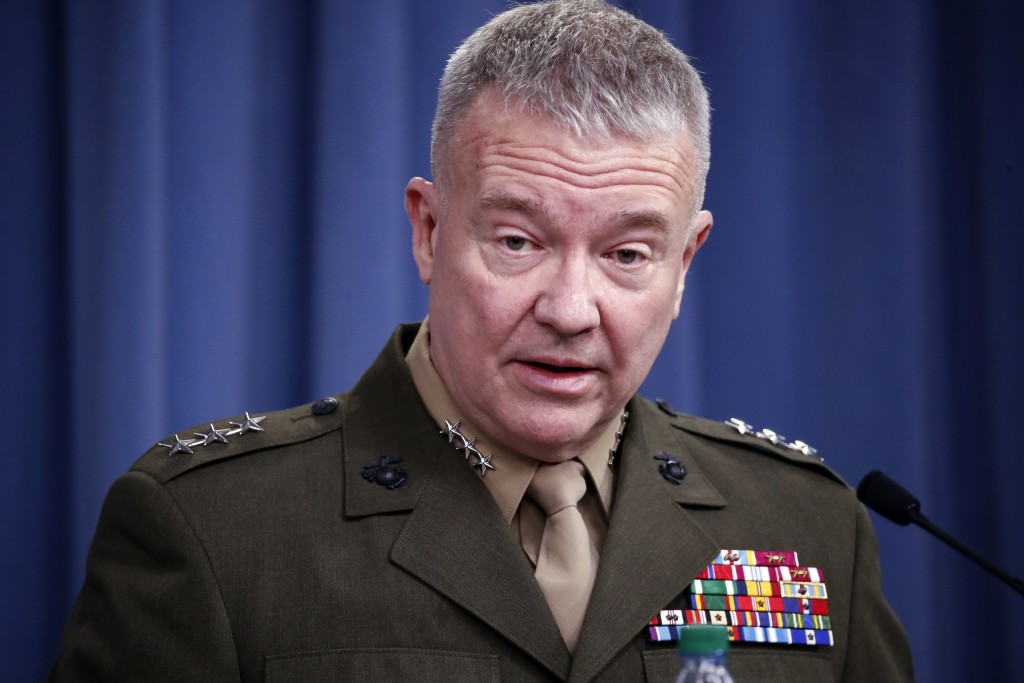 WASHINGTON (AP) — Elements of the Islamic State group are working to rebuild in western Syria, where the U.S. has little visibility or presence, the top U.S. commander for the Middle East warned on Wednesday.

In the region west of the Euphrates River where the Syrian regime is in control “conditions are as bad or worse” than they were leading up to the rise of the Islamic State, said Gen. Frank McKenzie. "We should all be concerned about that.”

McKenzie said insurgents are operating with some degree of freedom, and he said the U.S. and its allies have little hope the Syrian regime will do anything to tamp down the group there.

Speaking online to a United States Institute of Peace from his U.S. Central Command office in Tampa, McKenzie said that the slow-moving effort to transfer people out of Syrian refugee camps has been further complicated and delayed by the coronavirus pandemic. And that, he said, fuels concerns about the radicalization of people — particularly the youth — in the camps, which officials worry are breeding grounds for IS insurgents.

The al-Hol camp in northeastern Syria is home to as many as 70,000 people — mostly women and children — who were displaced by the ongoing civil war in Syria and the battle against IS. Many fled as the U.S.-backed Syrian Democratic Forces cleared out the last pockets of land held by IS last year.

Leanne Erdberg Steadman, the USIP director for countering violent extremism, said getting people out of the camps is key to having them abandon violence and secure a new future. Officials said that there have now been the first few reported cases of COVID-19 at al-Hol.

McKenzie said concerns about blocking the spread of the virus among European allies and other nations in the region has complicated efforts to repatriate camp residents to their home nations.

Repatriation is the key to clearing out the refugee camps, and the U.S. has aggressively pushed to get allies to take their own citizens back. Most nations, however, are reluctant to take in potential IS insurgents. And the potential spread of COVID-19 is now an added fear.

Humanitarian groups say many of the women and children are not risks, but officials also note that there are a lot of women who were radicalized and active in the insurgency.

McKenzie said that unless political leaders find a way to deradicalize and repatriate the displaced people in the camps, there will be another IS resurgence in the future.

“As young people grow up, we’re going to see them again unless we can turn them in a way to make them productive members of society,” he said. “We can either deal with this problem now or deal with it exponentially worse a few years down the road.”