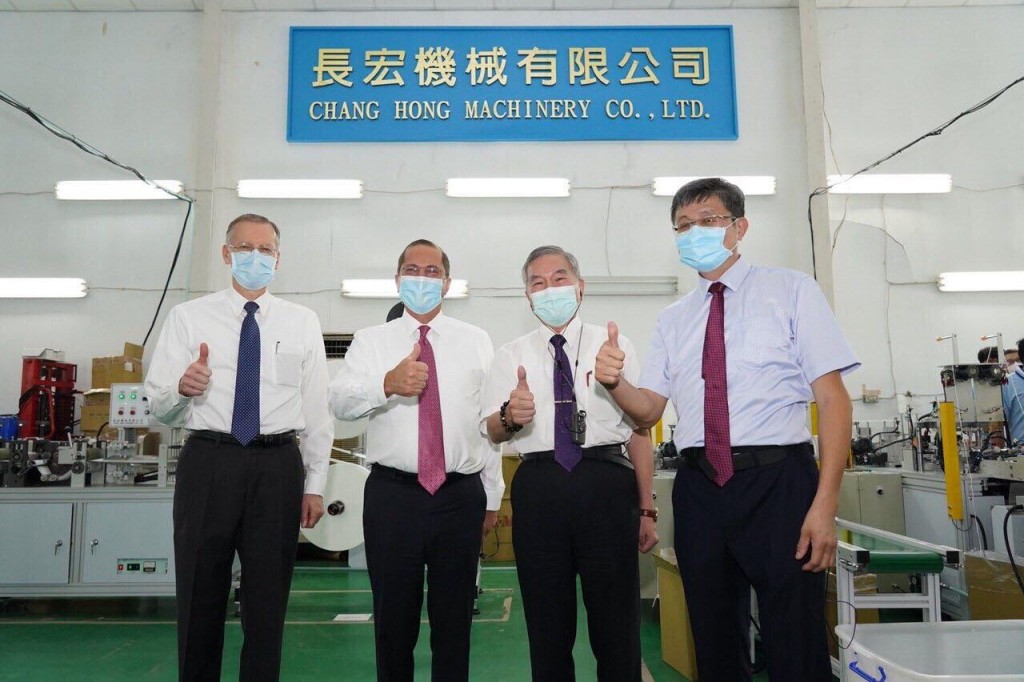 TAIPEI (Taiwan News) — During its four-day trip to Taiwan, the visiting U.S. delegation has discussed bilateral trade issues with Taiwanese officials, touching upon a potential trade pact as well as Taiwanese investment in the manufacturing of medical supplies in the U.S.

U.S. Secretary of Health and Human Resources Alex Azar confirmed during a teleconference on Wednesday morning (Aug. 12) that the delegation had the opportunity to discuss trade issues with members of the Taiwanese government and private sector over the last few days. He said the two sides discussed potential negotiations for a bilateral free trade agreement but declined to provide any details.

The Taiwanese government has long expressed an interest in signing a trade pact with the U.S., but until now there has been no sign of formal negotiations between the two governments. Analysts have said that the Taiwanese ban on the import of American beef and pork products containing ractopamine has been the main reason for the stalemate.

According to the health secretary, the U.S. delegation also discussed the possibility of expanding the manufacture of personal protective equipment (PPE) and other medical supplies on American soil with the involvement of Taiwanese enterprises. He added that the Trump administration intends to keep factories manufacturing healthcare supplies in the U.S., including those related to PPE and pharmaceutical ingredients.

"I’m interested when I visit the face mask machine factory to learn the technical aspect of it,’" said Azar on Wednesday morning, before his trip to a mask-manufacturing factory in New Taipei, in the company of Vice Premier Shen Jong-chin (沈榮津). Wrapping up his four-day trip, Azar said he took great interest in learning about Taiwanese officials’ aggressive measures to contain the coronavirus (COVID-19) outbreak, adding that the situations in the two countries are quite different.

Azar reiterated that the focus of his trip is to recognize Taiwan’s coronavirus response, which he described as "a model for healthcare," and highlight its contributions to the world on public health issues, especially considering the island nation has been excluded from the World Health Assembly — the World Health Organization’s decision-making body — since 2017.

"The message that I brought from President Trump to Taiwan and the people of Taiwan is how much their friendship and partnership across security, economic, and healthcare issues is valued by him and by the United States, as well as
by the people of the world," he added. The delegation departed for the U.S. Wednesday afternoon after attending a luncheon hosted by Taiwanese Foreign Minister Joseph Wu (吳釗燮).